Travel to Thailand: Almsgiving to Monks in Chiang Khan 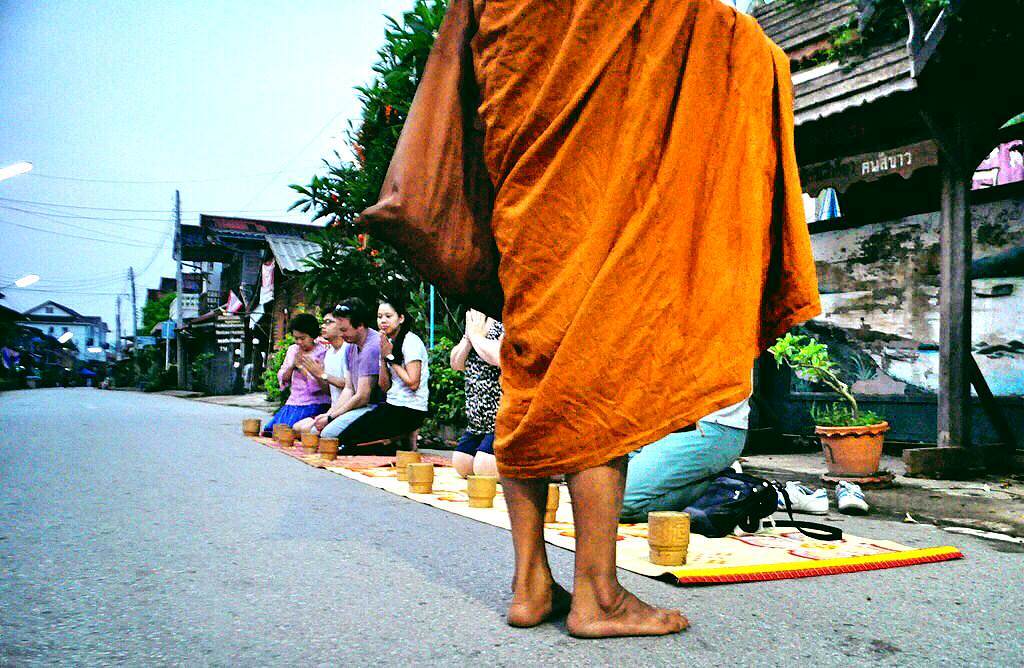 A monk chants a prayer after receiving his alms in Chiang Khan in the Loei Province of Thailand, March 2015

Throughout my short night in the Sri Chiang Khan Hotel, a gecko with an impressive pair of lungs jolted me awake every time my sleepy eyes closed. Although I tried, I never saw the mighty lizard but definitely heard its distinctive “GECK-oh” call as clear as day.

Who Needs Sleep?
Luckily, I can recharge my mental batteries with a few hours of shuteye because soon enough, my 4:30 a.m. alarm sounded and I hopped out of bed as if it were Christmas morning. The first activity of the day was participating in the merit making ceremony (an almsgiving) to the monks of Chiang Khan. 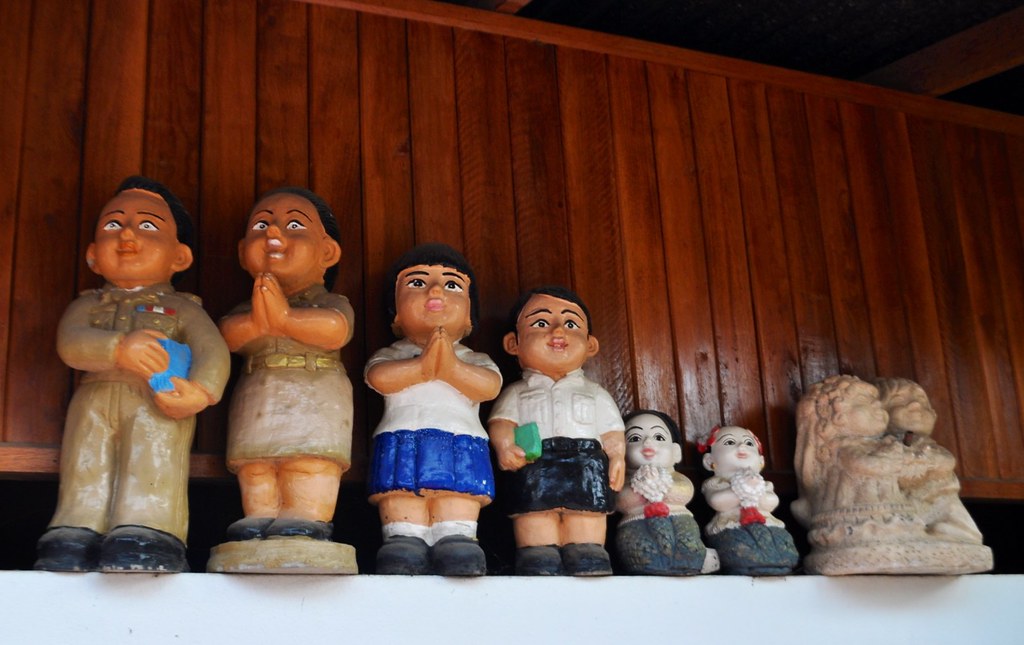 Just some of the kitsch, plastic toys I spotted in Chiang Khan, Thailand, during my visit in March 2015.

Walkabout in Chiang Khan
Located in the Loei Province of Northeastern Thailand, Chiang Khan is an adorable town with kitschy flair. Chai Khong Road is the main tourist-area and parallels the Mekong River. As I walked the road, in addition to the wooden structures housing shops, restaurants, accommodations, Thai massage parlors, cafes, souvenir shops and other businesses, I noticed plastic toys probably from the 1950s sitting in unsuspecting places, such as shelves outside storefronts. I also saw bicycle-themed souvenirs every which way my head turned. 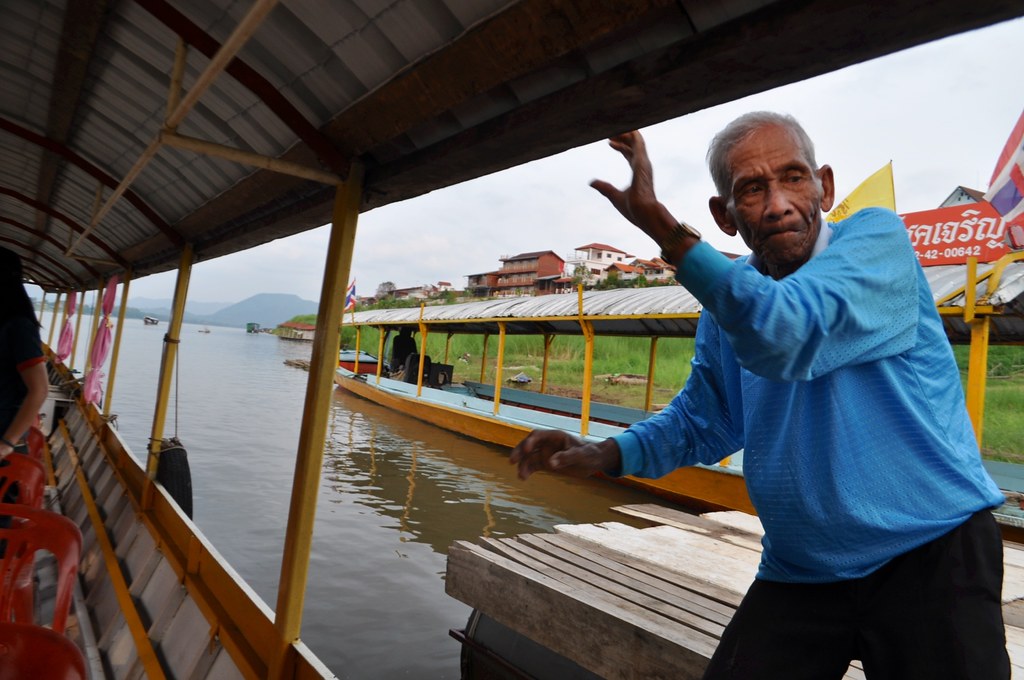 Captain of the longtail boat pushes off before setting sail up the Mekong River in Chiang Khan, Thailand, March 2015.

Just across the water is the country of Laos and during my brief visit, I enjoyed the sunset while cruising the river in a longtail boat. Along the river is a pathway ideal for walking or riding a rented bicycle to enjoy the meandering river, bright yellow sunflowers and mountains. 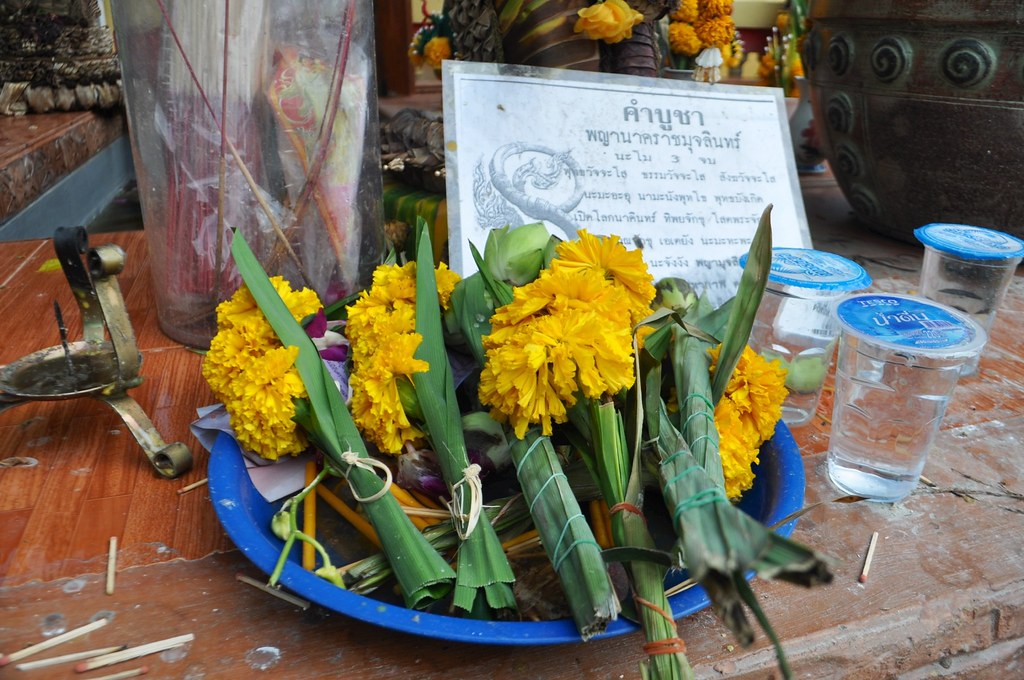 Almsgiving to Monks in Chiang Khan
The morning of the almsgiving, other visitors, Chiang Khan residents, and I, made our way out to the street. A mat was placed on the ground and my hotel had prepared sticky rice for me, which is typical of area hotels. It sat in a small tub with a wood base and woven lid. (Note: sticky rice is well, sticky rice. It’s nearly lacking starch amylose which makes it sticky.) 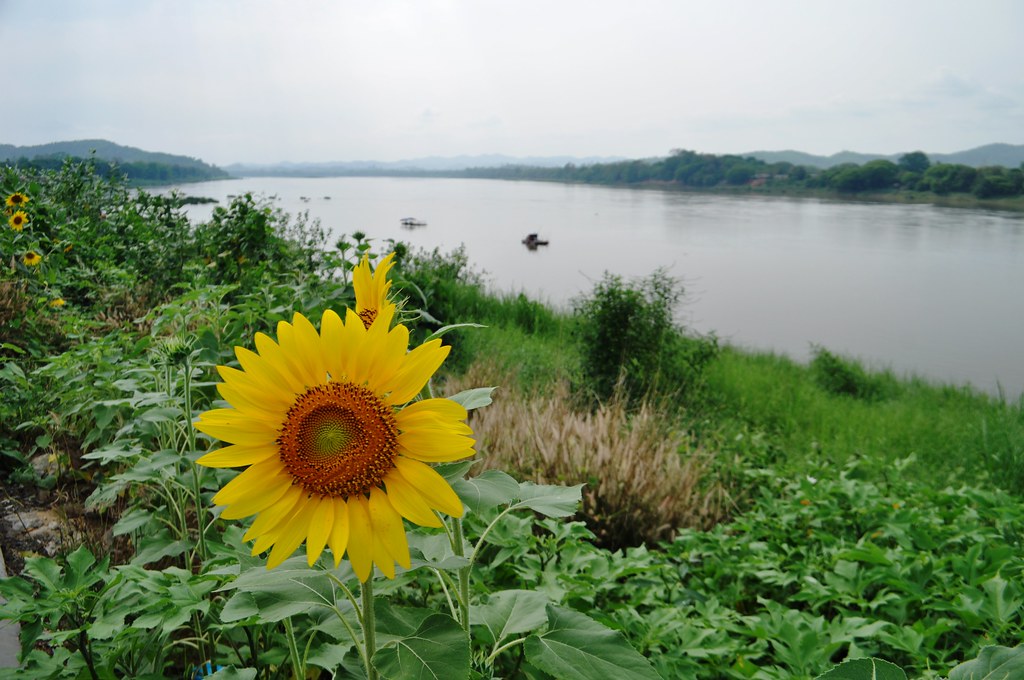 At 6 a.m., the monks of Chiang Khan begin their walk along the streets accepting offerings which are taken back to the wat to feed them. In addition to rice, I saw some people carrying little blue, plastic baskets holding with what looked to be rice, water and Twinkies. As I waited, a woman on a bicycle sold colorful flowers to those wanting to make a floral offering (non-edible, I suppose). 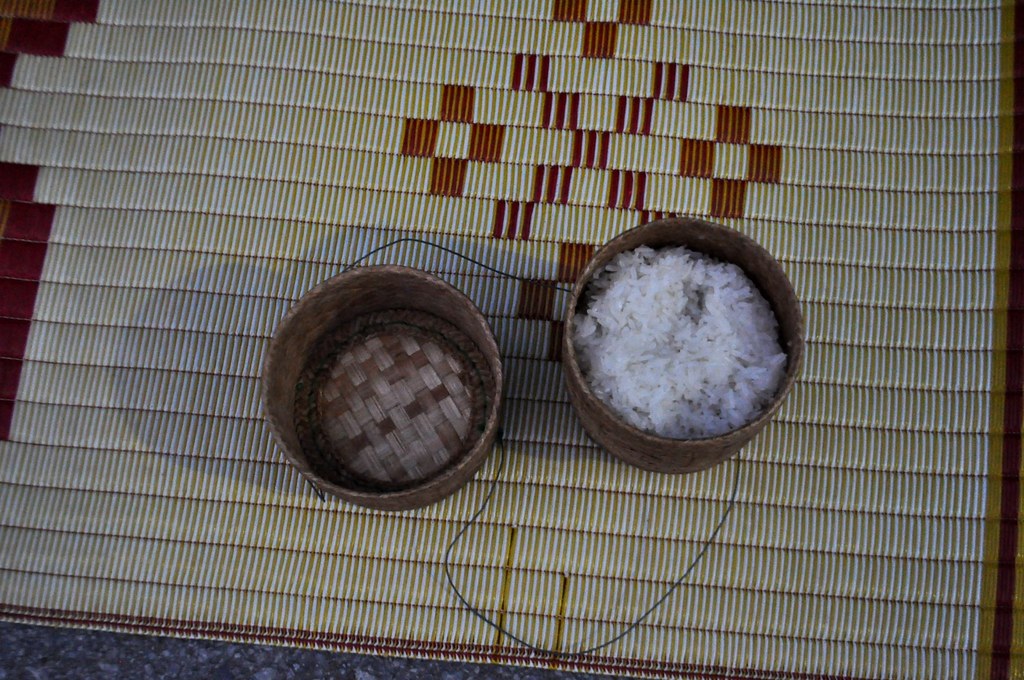 Sticky rice to hand out to the monks in Chiang Khan, Thailand, March 2015.

When my watch read 6 a.m., I was expecting a flood of monks to come running down the road, almost like the running of the bulls. Instead, a sole monk wrapped in a saffron-colored robe and bare feet emerged from the pre-dawn light. 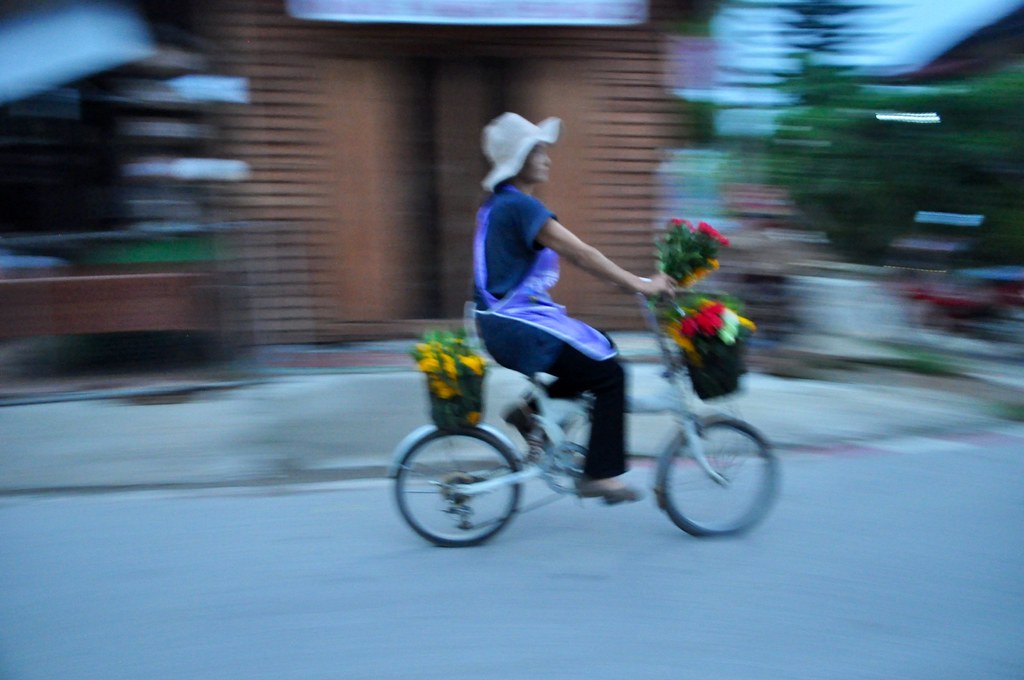 A woman sells flowers as offerings for the monks of Chiang Khan, Thailand, March 2015.

Kneeling on the mat and holding the tub of rice, I prayed to my God hoping I wouldn’t screw this up and cause an international incident. What could go wrong? For one, I could accidentally touch the monk which is a no-no. Second, I worried I wouldn’t give each monk a proper serving of rice. What if they were depending on me to pull them through the night and I only gave them a few grains of nourishment? Oy, the pressure! 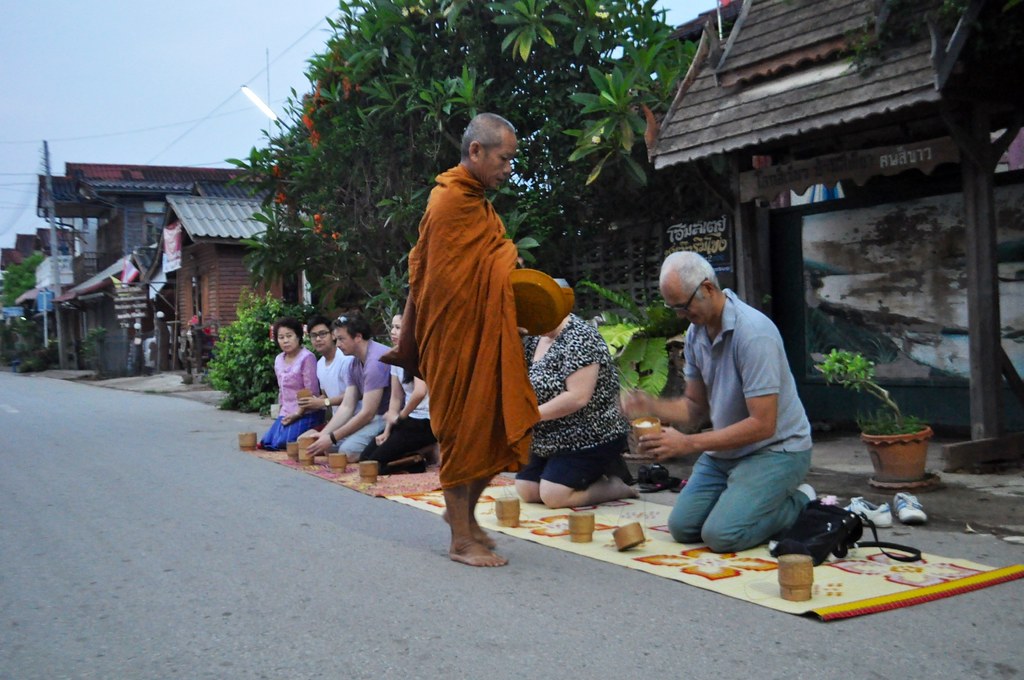 Visitors give sticky rice offerings to a monk in Chiang Khan, Thailand, March 2015.

Too Much Portion Control?
The first monk approached and my fingers nervously scooped out about a tablespoon’s amount of sticky rice and placed it into the bowl he carried. Mentally, I likened this meager offering to trick-or-treating. You know, on Halloween you can’t give the first group of kids knocking at your door a handful of candy. You need to pace yourself throughout the night so by 7 p.m., you’re not searching between the couch cushions scraping up pennies to hand out. Of course, this method almost always guarantees you’ll be munching on mini-candy bars for the rest of the week.

After I carefully added my offering with the heaping pile of rice in his bowl, I immediately set the container down, put my hands together and bowed my head as the monk chanted a prayer. 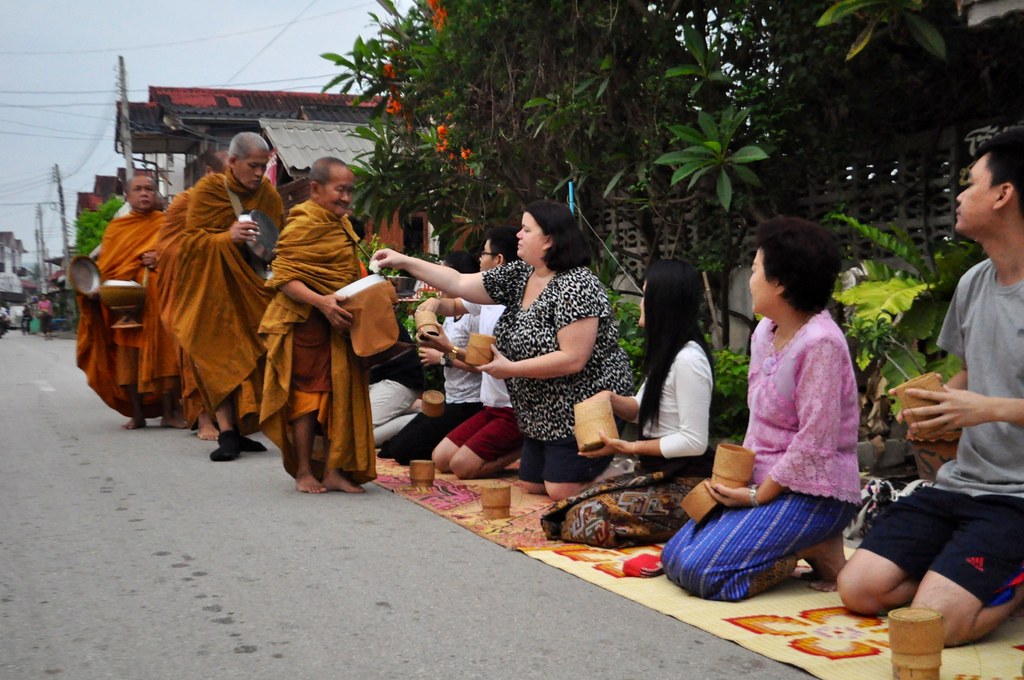 Slowly, one by one, more monks walked up, paused in front of me and held out their bowls as I scooped up respectable portions. Eventually, about half-a-dozen monks made their way to my mat, led by an adorable, older monk. (Are those impure thoughts to think a monk was cute?) I was told the monk in the front had been at the temple the longest and wasn’t necessarily the oldest. After offerings were placed in each of their bowls, they lined up and together chanted a prayer (see the accompanying video).

Well before 7 a.m., the sun began to rise and cast a warm glow over Chiang Khan. The almsgiving had finished and I reflected on the experience while watching the monks retreat into the wat. 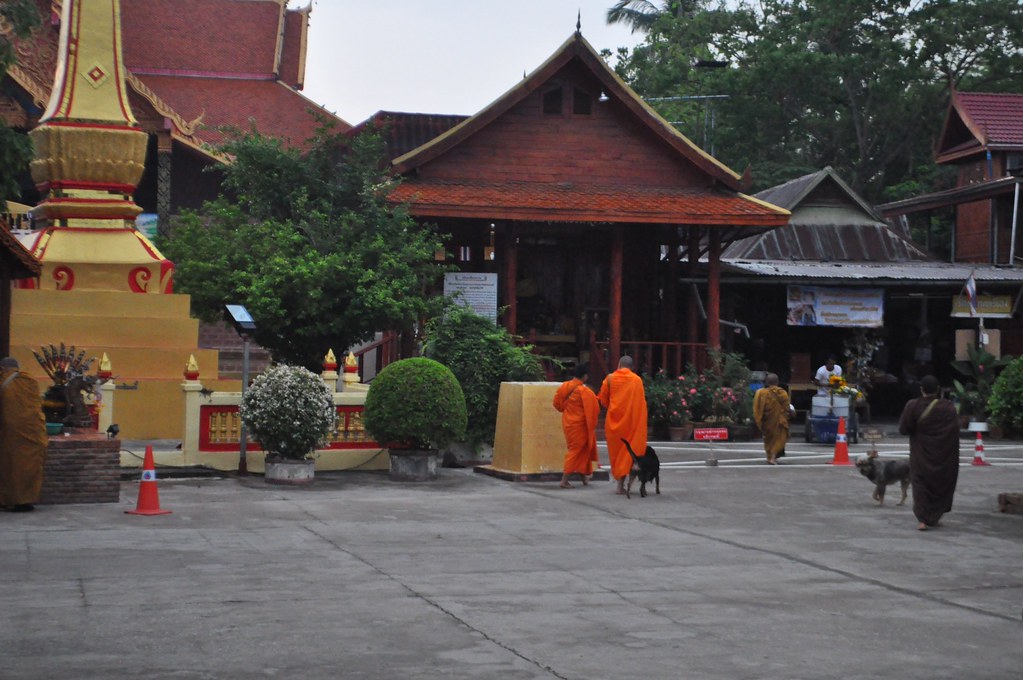 Monks retreat into the wat following the almsgiving in Chiang Khan, Thailand, March 2015.

Was it a spiritual moment? In a way, yes. Adrenaline pumped through my body as I participated in another culture’s ritual and although I flubbed a little, I didn’t cause an international incident. By participating, I felt a connection to the Chiang Khan community, Buddhist monks and perhaps oddly, to my God.

What did I do next? Hopped in a tuk tuk for a quick tour of the town! 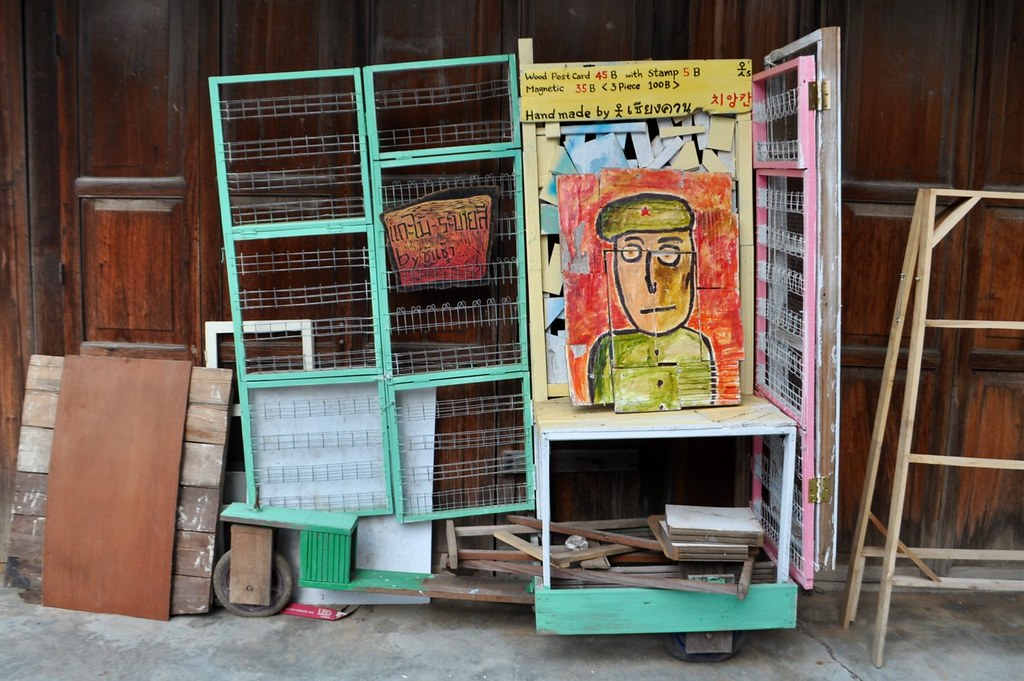 Spotted on a side street in Chiang Khan, Thailand, March 2015.

Note: During my March visit, Chiang Khan was somewhat quiet as apparently, it was the “off season” for tourists, plus, it was during the week. I’m told the destination is popular with the Thai people because it is relatively cooler than other areas in the kingdom.

Disclosure: I was a guest of the Tourism Authority of Thailand and this post has not been reviewed by the host. Opinions are my own and reflect my honest experience. #DiscoverThainess #TBEXAsia #TBEXThailand