Home » Solo with Others » Bull’s-Eye!

Haven’t held a bow since high school (20+ years) and had the chance earlier this month during the Southeastern Outdoor Press Association Annual Conference which met here in my backyard of Charlotte Harbor & the Gulf Islands. One daywas specifically designated for shooting and as an added bonus, Steven Robbins, Program Coordinator for Florida’s National Archery in the Schools, came out to give conference attendees a demo in archery and overview of the program including instruction. 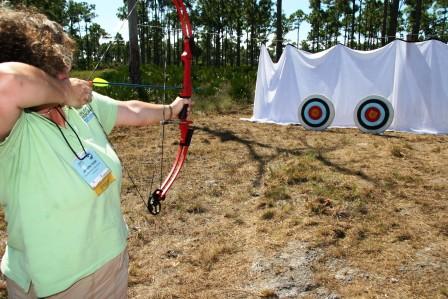 Here’s the skinny on Florida’s National Archery in the Schools Program: The National Archery in the Schools Program (NASP) teaches Olympic-style target archery in Phys Ed classes for grades four through 12. It’s a cooperative effort between the Florida Department of Education and Florida Fish and Wildlife Conservation Commission. Content NASP covers are archery history, equipment, mental concentration, safety, shooting techniques, and self-improvement. The program isn’t in all Florida districts so parents are encouraged to request it through their school administrator.

Although I had the opportunity to shoot a gun – something else I haven’t done since high school when the neighbor kids would let me shoot their rifles out their bedroom window at targets of vegetables mounted on bales of straw – I just didn’t have the desire to do so. But archery I could handle. 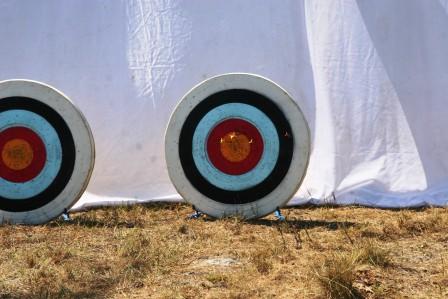 Robbins provided Tom MacKenzie and me the same instruction given to students. We had to wait behind a line, walk up to our bows upon command, pull an arrow out of the cone (which I’m sure it has an official name) and place it on the bow.

Three fingers pulled back beneath the arrow, Robbins instructed me to align my arrow and target with the bow’s string. So I did and expecting to hit the big white sheet behind the target (or perhaps the target next to me) hit the black ring on the target. 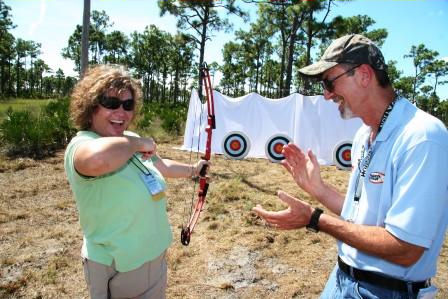 After another try or so, I actually made a bull’s-eye! I don’t remember it being so easy but for that day, hitting the target was easy. Was it like getting back on bicycle? I’m guessing precise training. As you can see, Robbins is happy for me, too.