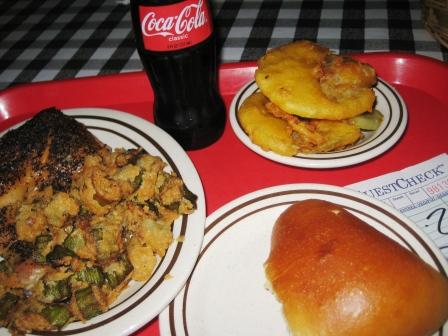 Yesterday I was in Birmingham, Ala., and rather than sinking my teeth into good ole’ barbecue, I ventured over to the Irondale Café in nearby Irondale for their world-famous fried green tomatoes. You can take the girl out of New York but can’t take the Yankee out of the girl. I love food in all shapes, forms, and tantalizing flavors and textures. I’m always up for tasting something new and rarely turn my nose at anything edible.That’s why it’s so hard for me to say I’m not a fan of fried green tomatoes.

Living in the South, I feel it’s my duty to embrace the golden discs. But it ain’t happening. Anything dipped in batter and fried to a golden goodness in a vat of animal fat sounds as though my taste buds are destined to fall in love with it. I’ve savored deep fried Twinkies, Oreos, and Coke. But fried green tomatoes? I’m not feeling it.

Only a short distance from the Birmingham International Airport, I arrived in time for the cafe’s 11 a.m. Sunday opening and I wasn’t alone. Dozens of other folks lined up for the buffet-served meal. Chalk boards announce items such as fried chicken, beef liver and onions, and world-famous fried green tomatoes.

I picked up my red tray and the man wearing kitchen-white asked what I wanted. Overwhelmed with Southern cuisine, I named off what I could identify, there were no labels like ones found at ice cream shops. A bottle of Coke in the classic bottle, baked chicken, fried okra, a hot yeast roll, and of course, fried green tomatoes. (Lunch total: $9.99)

Dining alone, I felt all eyes were on me since most folks probably were either heading from or to church. But, I found a nice little table in the corner of the first dining room. Like the rest, my table was topped with a vinyl black and white check covering with red vinyl and chrome chairs. Hugging the tomato-green painted wall adorned with head shots of the celebrities who starred in Fried Green Tomatoes, I watched the crowd of hungry patrons growing and kitchen crew churning out more food.

The next table over, three ladies chattered away, gushing over the food and how next to Driving Miss Daisy, Fried Green Tomatoes were their favorite movie. As they left, I heard one say, “I ate enough to kill an elephant.”

At another table, a family of five sat down, with the father saying this was his favorite Sunday lunch spot.

I saved my order of fried green tomatoes for dessert, hoping to savor them like a sweet pecan pie. The crust was flaky but when I bit into the world-famous fried green tomato, I remembered I just don’t like them. The crust was heavy with the taste of grease and tomato was sour. Is that how they’re supposed to taste? I ate the three other slices, all the same. Perhaps that’s the appeal and it just isn’t for me.

Whether you enjoy fried green tomatoes or not, Irondale Cafe is worth the visit. Publicity clips adorn the wall along with movie posters. It sits across a railroad track and a gorgeous mural of a train adorns a side of the building. Despite its Hollywood ties, Irondale Cafe is authentic Southern cuisine.