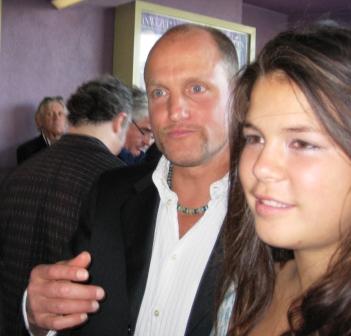 Wood Harrelson and Daughter Deni at the 2009 Sarasota Film Festival

Last year I had the pleasure of being part of a Twitterering team live Tweeting during the Sarasota Film Festival and think I did a pretty good job in creating buzz. I garnered regional media coverage with a press release I wrote, created the hashtag and had at least a couple dozen followers and festival attendees tweeting with it.  The gig was arranged through one of the event sponsors and since that company is not a sponsor this year and the Sarasota Film Festival organizers have not reached out to me, I won’t have the access I did last year.

Don’t worry, being all about bragging rights, I’m still planning on attending some events. The stalking, err, stargazing will begin Friday, April 9, when I hover over the red carpet at the Van Wezel Performing Arts Hall when stars arrive for the opening movie, “The Extra Man” directed by Shari Springer Berman and Robert Pulcini and stars Kevin Kline, Paul Dano, John C. Reilly and Katie Holmes. As far as I’m aware, Kevin Kline is the only cast member attending. I’d be floored if Mrs. Tom Cruise shows up. Would be great blogging and Tweeting material, though.

This year I have the goal of meeting one particular celebrity and won’t reveal it until after the festival – wouldn’t want to jinx myself.

To be consistent with live Tweeting last year’s Sarasota Film Festival, I’ll be Tweeting with the hashtag #srqfilm. Feel free to join in the Tweeting …or not.

How about this, if someone finds me at the 2010 SFF, I’ll give you one of my Solo Travel Girl buttons. They’re cute as a…button. Limit to the first 20 Tweeps. Here’s a hint, Friday night, I’ll probably be wearing the same top I wore when I met Bill Paxton.

Check out photos from the 2009 Sarasota Film Festival over on Flickr.