A summer getaway to Death Valley probably does not top everyone’s vacation list but it is an experience I recommend you try at least once. Sure, the summer heat can feel like a furnace, especially when it’s over 120 degrees, but longer days and dark nights with a clear sky make it worth the visit. Plus, find a cool retreat in the Oasis at Death Valley.

Shortly after midnight, I woke from my three-hour nap a little bit groggy and disorientated.

“Why am I getting up?” I asked myself. Then I remembered. The Delta Aquariid meteor shower should be putting on a show, especially since the moon was 6 percent full.

In the early hours of a July morning, I left the cool comforts of my lush room at the Inn in Death Valley and hopped in my rental car. My destination was less than 10 minutes away, Harmony Borax Works. More than 120 years ago, this was a mining operation where 20-mule teams hauled borax 165 miles to Mojave, Calif. Remnants of buildings, machinery, and piping remain. This was also the darkest location closest to the Inn to observe the meteor shower.

My mouth dropped and I could not stop saying, “wow” when I stepped out of my car and into darkness. The temperature had cooled off to 100 degrees and although refreshing from the day’s high of 124, something else grabbed my attention. Looking over the mountains, thousands, if not millions, of sparkling stars, lit up the Death Valley night sky. In the middle was a chalky-white swath. It was the Milky Way.

Despite being about a two-hour drive west of Las Vegas, Death Valley has some of the country’s darkest skies. Light pollution within the park is minimal and, in most spots, such as Harmony Borax Works, the night sky probably looks like what it did before colonization. The International Dark Sky Association designated Death Valley a Dark Sky Park in 2013. According to the IDSA website, “Astronomical objects seen there [Death Valley] are available only to some of the darkest locations across the globe.”

Every so often, I saw faint white streaks fade into the galaxy. They were meteors. Looking up, I wished there was a way to bottle the awesomeness surrounding me. My nighttime photography skills need some work, so I decided to live in the moment. After about 45 minutes of soaking up the nighttime sky, I called it a night.

Rise and Shine for the Sunrise at Zabriskie Point

Another morning, my alarm sounded at 5 a.m. and I made my way to Zabriskie Point to watch the sunrise with at least a hundred other visitors. Despite all those people, it was practically silent, except for the light whistle of wind. Sunrise watchers paid this experience as much respect as stepping into a church.

As the sun rose, mountains changed from a dark grey to purplish, to a deep brown color. It was almost 7 a.m. when Zabriskie Point was in the full golden light.

Death Valley National Park boasts extremes. Some of the hottest temperatures in North America and the world have been recorded in the park. On July 10, 1913, Death Valley reached a recorded maximum temperature of 134 degrees, making it a world record high.

Last summer, the park broke the record for hottest monthly temperature anywhere in the world. The July average temperature was 108.1.

I stopped at the Furnace Creek Visitor Center where the temperature fluctuated between 127 and 129. Although great for a photo opportunity, that is not the official thermometer for the park and the official high that day was 124.

With an average annual rainfall of 2.36 inches, it is the driest place in the U.S. The park is home to the lowest point in North America, Badwater Basin at 282 feet below sea level. Here, find a carpeting of salt flats that crunches with each step.

By presidential proclamation, Death Valley became a national monument in 1933 and national park in 1994. In March 2019, President Donald J. Trump signed the John D. Dingell, Jr. Conservation, Management, and Recreation Act (Public Law 116-9) increasing the park in size by about 1 percent to 3,422,024 acres. This makes it almost the size of the state of Connecticut and outside of Alaska, it is the largest national park in the U.S.

Long before it was a national park, Death Valley earned its name in 1850 when a group of 49ers searching for gold passed through the valley and left by climbing over the Panamint Mountains. One member in the party of about 300 died and others fell ill. Leaving, one of the pioneers looked back and is quoted as saying, “Goodbye, Death Valley.”

This is probably why some of the park’’ geological sites have names as Devil’s Golf Course, Desolation Canyon, and Funeral Mountains. With these uninviting names, why did I spend some of my summer vacation in Death Valley?

Surrounded by crinkled canyons and purple mountains is a lush, spring-fed oasis in the form of the Inn at Death Valley. For a year-and-a-half during the late 1990s, I called it home, when I worked for the park management company now called Xanterra Travel Collection, and I was overdue for a visit.

An Oasis in the Desert

The 66-room Inn, then called Furnace Creek Inn, opened in 1927 and was built by the Pacific Borax Company. It was and still is, a popular winter retreat for those seeking a break from the hustle and bustle of day-to-day life, especially those in the Los Angeles area. During my brief time working at the Inn, I met several celebrities and I’m sure there were those who stayed who did not want to be known.

Eventually, Furnace Creek Ranch, about a half-mile from the Inn, was built with more family-friendly features including 224 hotel rooms. Recently, the properties, privately owned by Xanterra Travel Collection, were aptly renamed the Oasis at Death Valley and underwent an 18-month, $100 million renovation and enhancements including a new dining and gift shop building and town square at the Ranch. An additional $35 million project will begin at the Ranch soon, including expanded shopping and dining options.

The Inn has been AAA Four-Diamond rated for years and the enhancements have made it better. Twenty-two casitas were added to the Inn bringing the total number of sleeping accommodations to 88. They offer privacy and include a golf cart rental making it easier to navigate the property.

A natural spring pumping out 80,000 gallons of water a day hydrates the lush, green gardens which pop with colors of white and pink flowers. Tall, thin date palms shoot up from the ground and offer some shade. The Inn’s spring-fed pool is 84.5 degrees and offers relief from Death Valley’s heat. Because it is open until 11 p.m., it is a refreshing place to look up and enjoy the night sky. When getting out, be prepared for a minute or two of chilliness. The dry air will evaporate the water off your skin, creating a tingling and cooling sensation.

The Lowest Round of Golf You’ll Ever Play

Since the Inn and Ranch are privately owned, they offer comforts typically not found in other national park lodges, such as the lowest round of golf you’ll ever play, at 214 feet below sea level; flat-screen televisions; WiFi; spa services; and exquisite dining.

It’s Easy to Enjoy a Date!

Dates were once harvested in the Furnace Creek area, and that may be happening again, soon. While dining at the Inn Dining Room, try the date bread and the Blue-Cheese Stuffed Dates which are wrapped in prosciutto and topped with a pomegranate reduction.

At the Ranch, try a date milkshake. The Last Kind Words Saloon is a feast for the stomach and eyes. It is like stepping into an old west saloon. Taxidermied game animals, antique cowboy apparel, and posters from the wild west accent the walls of the two-story eatery. Find plenty of options to make a buckaroo grin including the 36 oz. tomahawk ribeye, a perfect entrée to share.

Summer is Hot but Busy

July and August are some of the busiest times in the park, a popular spot with European visitors and vacationers from Southern California and Las Vegas. It is also a popular location for car manufacturers to test their vehicles in extreme conditions. During my visit, I saw a handful of companies testing cars including autonomous vehicles. By chance, I watched and heard the roar of military jets race through the sky. Death Valley has also been the stage for several television shows, commercials, and movies, including some of the Star Wars films.

I took a drive along Emigrant Canyon Road toward the Wildrose Charcoal Kilns and although I did not see them – I was running out of fuel and feared I’d be stuck – I did see Death Valley’s wild burros, including several with foals. This part of the park is a higher elevation than Furnace Creek which means cooler temperatures (it’s all relative, about 10 degrees cooler), more water, and more vegetation, which the burros consume. They are not native to the park and I do not know how much longer they will be in the park. In May 2018, Death Valley National Park entered into an agreement with Texas-based Peaceful Valley Donkey Rescue to capture and relocate 2,500 burros. Although not native, I’m still glad I saw them.

A Short but Sweet Visit

The desert dry heat, which feels like sticking my head in an oven, made me feel physically exhausted. I traveled as much as I could through the park and realized, although I had lived there for a short time, there was much more to explore. Three days was not enough to see everything, but it was enough time to disconnect from a 24/7 world and connect with Mother Nature.

Driving back to Las Vegas, I pulled over at the park’s boundary. Unlike those ’49ers who never returned, I whispered, “Goodbye, Death Valley,” promising myself I will return. In an area full of extremes, it may seem as though nothing can survive in Death Valley. Plants line roadways in higher elevations and around waterways. Animals as kangaroo rats, roadrunners, desert tortoise, and pupfish call the park home. So do the invasive burros, descendants of the donkeys left behind more than 150 years ago. Life is not easy under extreme conditions. But, hearty souls are resilient and survive and thrive in the desert, and so do I.

The Oasis in Death Valley
Death Valley National Park
Highway 190
Death Valley, Calif. 92328
www.oasisatdeathvalley.com
Tel: 1 -800-236-7916
Although July and August are busy months, so is the period from the end of January through early April. During winter and spring, the Las Vegas Astronomical Society hosts Star Parties for night sky observation. Visit their online calendar to learn when they are held. (lvastronomy.com)

Tips for Enjoying Death Valley During the Summer: 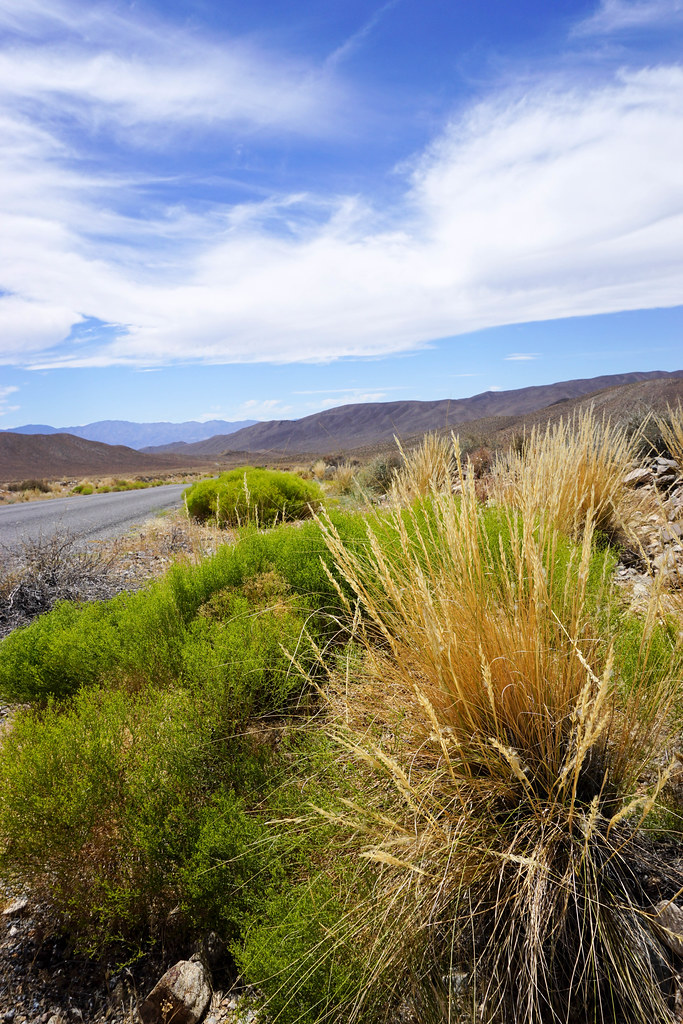 This post contains affiliate links to support this blog, my traveling habit, and my special-needs dog.

Originally from Buffalo, N.Y., a hiking trail led Jennifer to a career path in tourism. She has worked in the tourism industry for more than 20 years including 10 years with a park management company in Yellowstone, Death Valley and Everglades National Park. She currently lives in Southwest Florida, and maintains this travel blog with the goal of inspiring others to travel alone, not lonely.