The Weather Channel to Debut ‘From the Edge’ 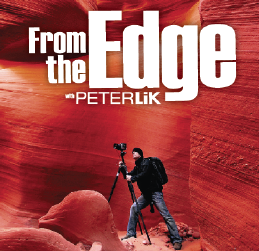 From The Edge with Peter Lik Premiers March 31, 2011, on The Weather Channel

If you’re like me and enjoy travel then you certainly love photography. Good folks at The Weather Channel (no, not Jim Cantore) recently made me aware of a new show called ‘From the Edge’ which brings together the works of Mother Nature and photography. Master Photographer Peter Lik is the show’s host and throughout the series, will show viewers scenery from his perspective through a camera lens.

Lik is in search of nature’s most dramatic landscapes and visits locations as volcanoes of Hawaii and snow of Alaska’s Denali National Park. In a clip I viewed on the show’s website, the photographer also visits Death Valley National Park, a place I once called home, and the imagery is outstanding. Makes me want to head back out West!

The show looks as though it belongs on The Travel Channel, Discovery or National Geographic but nope. Weather elements have carved amazing scenery throughout the United States and Lik will be sharing those treasures with viewers. It makes sense The Weather Channel eases into its first original programming with ‘From the Edge.’ The series premiers March 31, 2011, at 8 p.m. and I’m looking forward to where it will lead me.

Check out the clip here From the Edge with Peter Lik and check them out on:

FTC Disclosure: In compliance with FTC disclosure, representatives for The Weather Channel contacted me making me aware of the show, however, opinions are my own and I did not receive, nor will I, receive any compensation from TWC or their representatives, for this post.