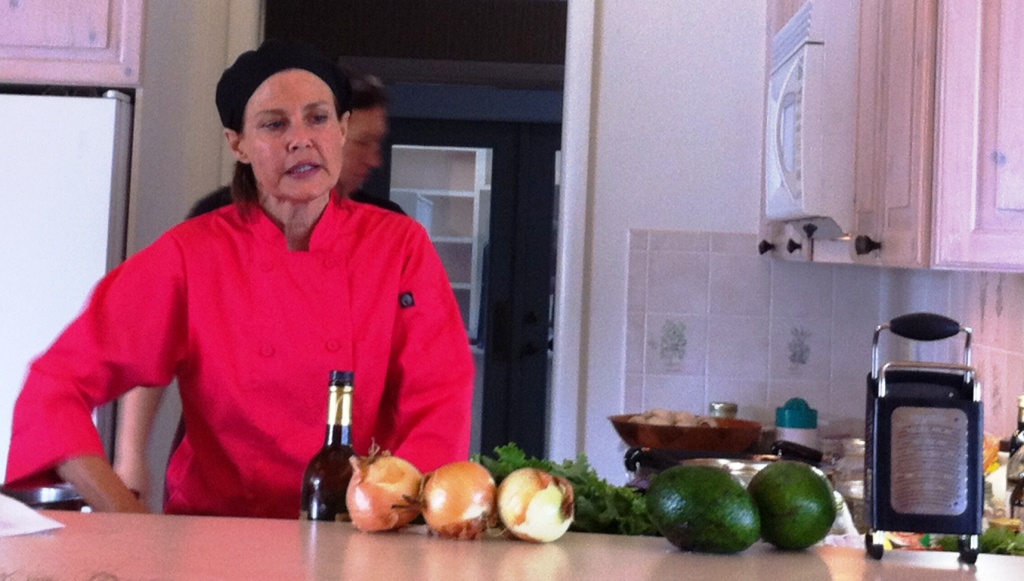 Watching and listening to food writer Vicki Chelf as she moved through the Florida House kitchen in Sarasota, Fla., on Saturday was much like observing an artist handed a box of materials and told “go create something.” Chelf is an accomplished artist but she’s also a twenty-first century Julia Child. Rather than constructing Boeuf Bourguignon, Chelf drifted through the kitchen making Carrot Curry Quiche, Kale Stuffed Mushrooms and four other dishes.

I was one of about 15 or 20 people – all women – who registered with Punta Gorda’s Worden Farm to participate in the “Healthy Holiday Hor d’oeuvres and Desserts” culinary workshop led by Chelf, a vegetarian and vegan food writer for close to 30 years. She’s authored six cookbooks (including some in French) and I brought home her most recent book Vicki’s Vegan Kitchen. In addition to being a culinary artist, she’s a graduate of Ringling School of Art and Design (had a one-person show in Paris) and holds a degree in holistic nutrition. 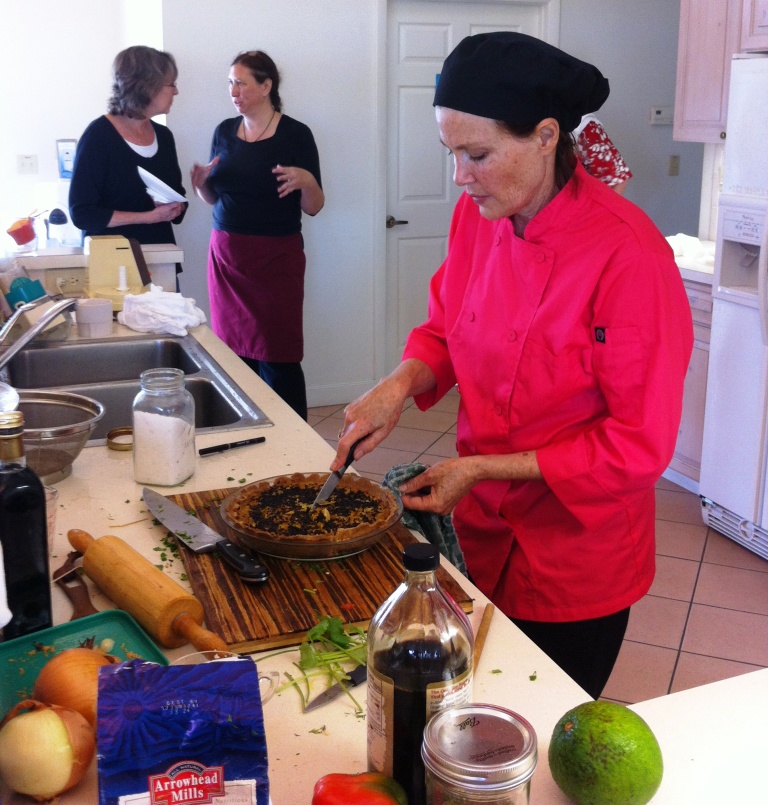 “It’s like art, there’s nothing you can’t fix,” she said early on in the class while demonstrating how to make whole wheat pie crusts.

Six vegetarian (primarily vegan) dishes were prepared during the three-hour class and although not everything went according to plan (such as the oven temperature running low, she was given totsoi rather than spinach for spinach quiche) , Chelf gracefully rolled with the flow and demonstrated how to prepare each entree even if all the ingredients weren’t available.

This is what I loved about Chelf and the class because there are countless times I’m preparing something and don’t have the exact ingredients then get frustrated. Chelf didn’t freak out, she basically giggled with an “oh well” attitude, compared it to art, and improvised with what she had.

“If you’re not too much of a perfectionist it will go better,” she said at one point.

After tasting her creations, she was right. Flavors were new to me and I couldn’t tell what was missing because I didn’t know what it was supposed to taste like. It was all delicious with a variety of textures. 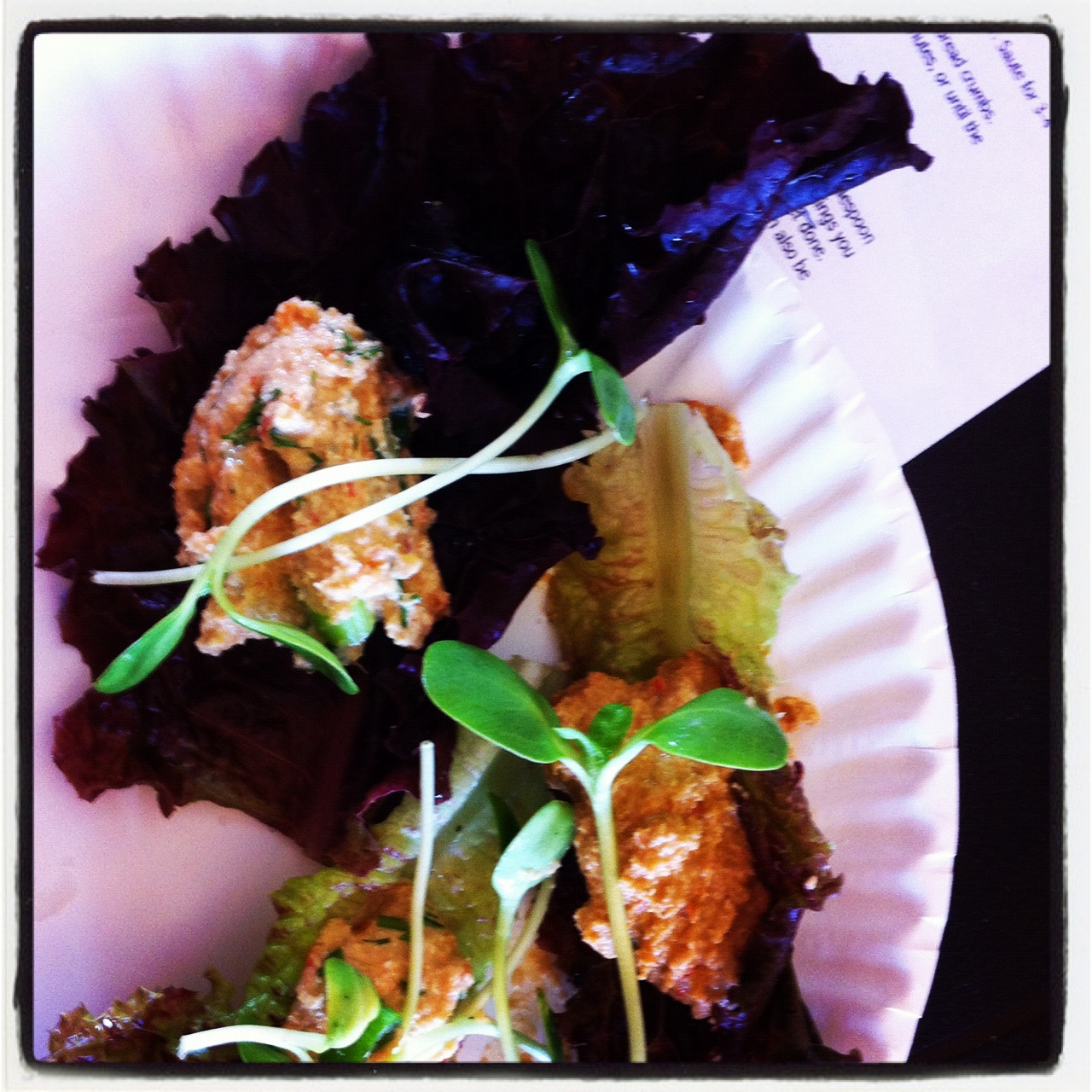 Not only was the class an education in “how” to do something, it was the “why” as well. She fielded questions about the use of tofu and soy in vegan and vegetarian diets, explained the importance of refrigerating certain food items so they don’t go rancid (like oats), and offered nuggets of advice ranging from how to easily strip kale off the stalk to when to buy nuts (winter season for the whole year – store them in the freezer).

Each participant left with recipes from Viki’s Vegan Kitchen for:

Interested in a vegan diet? Vicki Chelf will be holding an “Introduction to Vegan Cooking Workshop” Jan. 14, 2012, 2 to 5 p.m. at Worden Farm in Punta Gorda. The workshop includes menu planning for a balanced vegan diet, easy recipes and demonstration that there are other foods vegans eat rather than vegetables. Don’t worry if you’re not vegan (like me) the workshop is geared for vegans and those looking to add more plant-based foods into their diets. Reservations required. Visit the Worden Farm site here (www.wordenfarm.com) to reserve your spot. Fee is $25 for Worden Farm members and $30 for non-members.

Why Am I Learning to Eat Vegan?

I’m pretty sure I could never give up meat but I’m looking for ways to eat and live healthier. Increasing my intake of plant-based foods seems to make sense these days, especially since I’m borderline with high cholesterol and am looking to shed pounds. We’ll see how this goes because stranger things have happened. After all, Bill Clinton has gone vegan. Plus, I still remember what I learned from the movie Food, Inc.