Last year I ventured out to Fort Myers Beach for the American Sandsculpting Championship and was truly wowed by the sandy masterpieces sculpted by sand artists. Somewhere I have video (but guess I didn’t get around to making a flick out of it!) but check out some of last year’s sand sculptures.

This year the 23rd Annual American Sandsculpting Championship & Beach Festival is Nov. 3 – 8 and features 16 of the world’s best Master Sculptors who will be qualifying for the 2010 world championships. Now last year I parked at Summerlin Square Plaza, hopped on a trolley and it took about an hour to get to the beach. Yes. An hour. Plus, there was a fee for the trolley, I think 75 cents but can’t remember – just bring some quarters because I recall the driver didn’t have change. Traffic was incredibly congested which caused the slow going. It was also an hour back to the parking area so of the three hours I spent devoted to oohing and awing over sandcastles, two were spent standing on a trolley.

There were plenty of parking spaces out on Fort Myers Beach so maybe driving is the best way to go. According to NBC 2 (WBBH – Fort Myers, Fla.), the best way to avoid traffic is drive up the south end of Estero Island to Bonita Beach Road. Yeah, I don’t know exactly were that is but I’m sure Google does. There’s a free trolley pick up at Lovers Key State Park.

But, I wonder if traffic will be an issue this year. Fort Myers Beach Chamber of Commerce, the Sandsculpture Festival’s organizers, claim more 100,000 spectators have come out in years past but unlike years past, there’s a $5 per person admission fee. Previously, oohing and awing was free. Children are $3 or $10 per family.

Times are a changing, or a charging, due to the current economic climate. The admission fee may actually be a good thing in controlling traffic and it’s nice a family price is offered. And after all, where else can you go see something really groovy for five bucks? Can’t see a movie or sporting event for that price. For more information about the festival visit the American Sandsculpting Championship Web site.

If you haven’t been, you gotta check it out. It’s amazing how sand can be sculpted.

Will I be there this year? Probably not. Found out there will be a stone crab festival in Laishley Park on Saturday, Nov. 7 and I do love me some stone crabs (pictured if you don’t know what they look like). Yum! 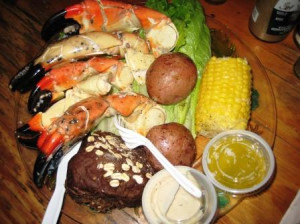