Thrifty Car Rental Had Me at ‘Hello’ 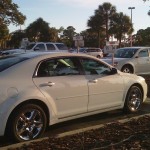 I’m sure I made Thrifty Car Rental’s PR guy cringe when I Tweeted how I needed to call roadside assistance for a tire issue. As I mentioned in a blog post last month, Thrifty set me up with a car rental to attend The Travel Bloggers Show in Orlando, then blog about the experience.

While blogging is my passion, I work in public relations and when a guest has a negative experience I brace for the aftermath. Sure, I could rant how the car was not up to par but in the end, customer service wins and Thrifty definitely came through in this department. I wanted to use the car and was looking into getting some discount auto insurance to cover me just in case there was ever an accident.

As mentioned in an earlier post, my Thrifty car rental was the only thing that went right on my trip. I enrolled in the Blue Chip program which meant all I had to do was walk up to the counter, be greeted with a “hello”, pick up my key and boogie on out. Honestly, it was the easiest part of my day.

The car handled great, it was some sort of General Motors vehicle and similar in design to my Saturn Aura Hybrid but I missed the bells and whistles of my car, notably OnStar’s Turn-by-Turn Navigation and XM Satellite Radio. I managed navigation with my Garmin Nuvi and dealt with FM radio – not the end of the world. Damage on Front Passenger's Side Tire

Heading home wasn’t quite so easy. With less than 50 miles from Sarasota-Bradenton International Airport, where I picked up the car, a semi truck drove by and I heard a rattling sound. Thought it was the truck until it had passed and realized something was wrong. Luckily, a rest area was close and I pulled in to find a chunk of plastic sticking out between the hubcap and wheel, which was probably causing the noise. I looked closer to see part of the hubcap dented as well as the wheel rim.

Knowing this could not be good, I looked at all the wheels and the rear driver’s tire had a similar issue – a dented hubcap and wheel rim. I immediately wondered, how could this happen? I didn’t run over anything and was pretty sure nothing hit me. Would Thrifty think I did it? There was rust at the indentation so they would have to know I didn’t do it.

After ‘hello’, was asked if I was in a safe location. The agent was very helpful, calm and friendly. She offered to exchange out the car but since I was just over 30 miles away to my final destination, and wanting to get home, I opted to drive the car back – after it was determined doing so was safe.

Unexpected things happen when traveling. It could have easily been my car having issues on the interstate (which happened later in the month). Thankfully my issue was minor and was able to hit the road quickly.

Upon returning the car, I told the guys in the lot and at the counter what happened. Later that afternoon the general manager called apologizing.

The way I’m treated goes a long way with whom I do business with. I like nice people and tend to give them my money rather than those who don’t care. Although there was a hiccup with car maintenance, I got from point A to point B and back again in one piece. Obviously getting from one place to the next is crucial, so maybe check out https://www.swapalease.com/short-term-car-leasing.aspx for short term car leasing.

I rarely rented from Thrifty before this experience because of the negative things I had heard but this first-hand experience changed my mind. Thrifty showed they cared and I truly appreciated the concern and follow up.