Shake, Roll and Muddle: Evening at the National Bartenders and Casino School in Fort Myers, Fla. 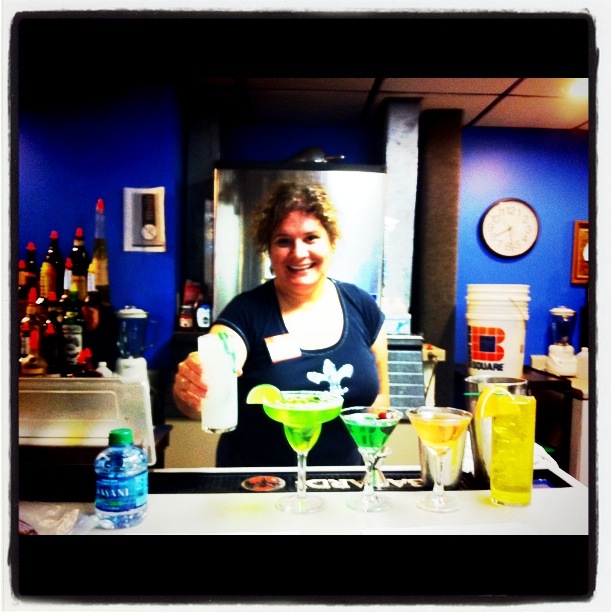 Mixing it Up at National Bartenders and Casino School, Fort Myers, Fla.

On a recent Saturday night I did what most single gals do, I hit the bar. However, rather than drinking I was behind the bar learning how to properly shake, roll and muddle drinks during a 90-minute class at the National Bartenders and Casino School in Fort Myers, Fla.

If I hadn’t seen a Groupon offer for the class, I probably would never have thought of taking this recreational bartending class. During the session, about 15 of us learned how to make five drinks and how to host a party for about 50 people. I picked up the Groupon because I thought it would be fun to try something new and would be a great way to meet new people. I was actually surprised there were three couples, two single guys and the rest were single women. Hmm. Not what I expected but still a nice group of people.

See the beverages in the photo? No alcohol is used during the class, it’s all colored water. After all, it is a training class meaning there will be lots of practice pouring, which is an art of its own (for ladies, it’s easier to grab the bottle’s neck and pour) and mistakes will be made.

I learned how to properly make a Tom Collins, Margarita, Cosmopolitan, Appletini and Mojito. I can also make a “flag” garnish (half an orange wheel speared with a cherry), know how to use a muddler to crush mint leaves and understand why a bartender fills a glass with ice (more ice means more alcohol in proportion to mixer).

Rachel, a bartender with an electric personality, led the class and Marilyn, the school’s owner for the past 24 years, sat in and encouraged us as we mixed and shook. Both of them are terrific people and Rachel is an instructor for the bartending class that could land you a second job.

The National Bartenders and Casino School offers a 40-hour program that can be completed in two weeks, five nights a week. Bartenders make decent money, especially during “season” in a tourist destination.