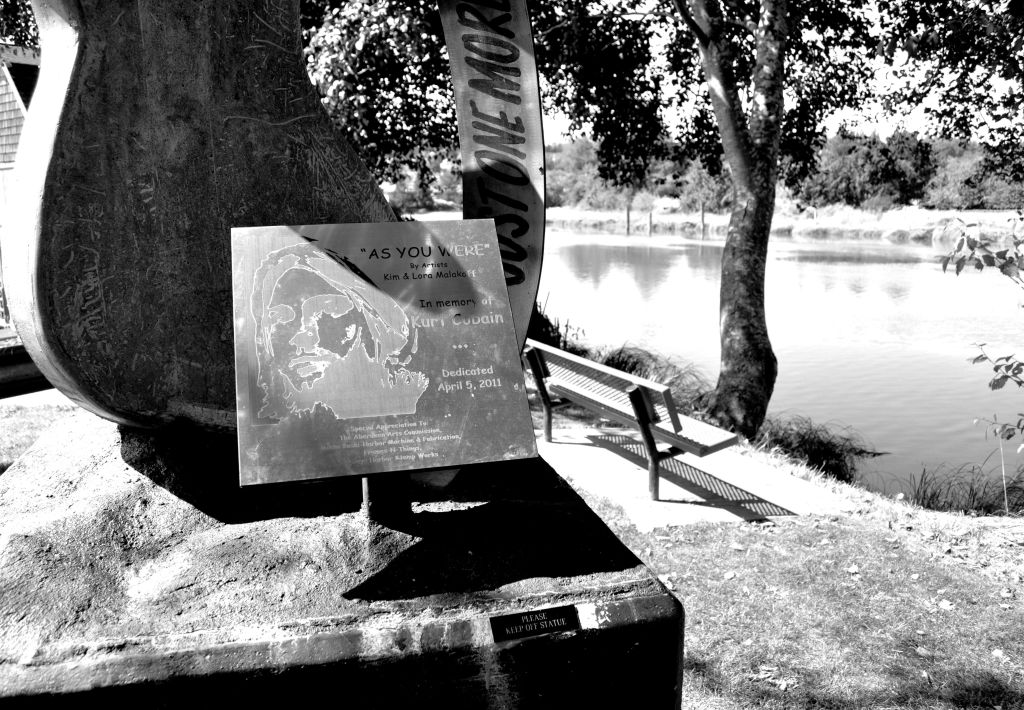 Be As You Were, Kurt Cobain Memorial, Riverfront Park, Aberdeen, Washington

Seventeen years after singer Kurt Cobain took his life, his hometown of Aberdeen, Wash., dedicated a memorial to the Nirvana front man on April 5, 2011. The Kurt Cobain Memorial is in Riverfront Park on the banks of the Wishkah River where the originator of grunge music spent much of his youth. Located about two hours southwest of Seattle, I paid my respects to the singer during my visit to Washington last month. When I arrived to the Kurt Cobain Memorial, a young couple sat on a bench overlooking the Wishkah. A single guy stopped by and spent time under the bridge overpass where a sign read, “From the Muddy Banks of the Wishkah.” A couple of families stopped by and took their photographs while an older couple walked their dogs through the park. A sign at the park summarizes Kurt Cobain’s ties to the Wishkah and the memorial. It reads:

“The name “Wishkah” is an adaptation of the Chehalis Indian word hwish-kahl, meaning “stinking water.” You are now standing upon the Banks of the Muddy Wishkah, home and inspiration to one of the world’s greatest musical icons.

Kurt Cobain, founder of the band Nirvana and originator of what is now known as grunge music, grew up just two blocks from this spot. Having spent much of his youth beneath this bridge, Kurt drew inspiration for his music from these surroundings. His song “Something in the Way” recalls his experience under the bridge – his bridge.

Kurt immortalized this river. In turn, the river now immortalizes him. After his death, family and friends gathered here to spread a third of Kurt’s ashes into the Wishkah. His spirit flows with the tide twice daily, changing forever the meaning of the old indian name.

Two years after Kurt’s death, Nirvana released their last album “From the Muddy Banks of the Wishkah.” Today, fans flock here from around the world to pay their respects and honor the memory of our beloved hero.” Kurt Cobain Memorial
E. 2nd Street on the south side of the Young Street Bridge
(Near the intersection of Stanton Street and E. 2nd Street)
Aberdeen, Wash.

Parking for the memorial is in a neighborhood and extremely limited. I ended up parking on a side street and walking a block.