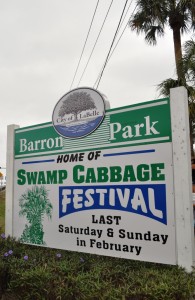 Eating the state tree seems as savage as the idea of eating the state bird. No, we don’t eat mockingbirds here in Florida but we do enjoy swamp cabbage (also called hearts of palm) which is the young bud of a Sabal Palm, or cabbage tree.

By “we”, I mean Floridians. Other than a few hearts of palm on salads, I haven’t knowing eaten swamp cabbage until this weekend during the LaBelle Swamp Cabbage Festival in LaBelle, Florida, located less than an hour’s drive east of Fort Myers. Held the last Saturday and Sunday in February, the festival celebrates the Florida cracker vegetable with a parade, crafts, amusement rides and entertainment including armadillo races.

My parents were visiting from Buffalo and this was one of those perfect events to show them what Florida’s really about. We watched the parade along North Bridge Street near Barron Park, the hub of main festivities. We arrived about an hour before the parade and found a great parking spot at the LaBelle Chamber of Commerce. The parade started off with a bang. Literally. We heard a “bang” as one of the swamp buggies drove by carrying local elected officials. Turns out something blew on the vehicle and it had to be towed to the end. …and sampled gator tail from Loafin’ Around Cafe, a food truck. I have to admit although I was curious about tasting swamp cabbage, I was more interested in the armadillo races sponsored by LaBelle Rotary Club. We saw two of the 20 races and early on, some of those armadillos looked cantankerous. Some wiggled about as they were carried down to the starting gate while others tried to climb up the fencing as if saying, “Get me outta here!” Each race lasted less than 2 minutes and we spent more time waiting for a race than watching one. I won’t say it was fun but interesting. I felt a little bad for the armadillos because I’m sure they were scared with all the cheering. One fell on its head when being placed in the starting gate. (I don’t think it was intentionally dropped, I think it just wiggled too much for the handler.)

I had to wonder, where did they find these armadillos? Was there a committee assigned to trap them the night prior or is there an armadillo handler somewhere who raises domesticated, racing armadillos? But isn’t that an oxymoron? Racing armadillos? Armadillos Leave the Gate and Race, err Waddle, to the Finish Line

I also didn’t understand when the announcer kept saying, “LaBelle is the place to see possums in the half shell race.” Hmm, last time I checked, possums, or opossums, weren’t armadillos. Maybe it’s just cracker talk this Yankee isn’t familiar with.

Overall, the LaBelle Swamp Cabbage Festival was fun and an great way to experience a slice of Florida life. It did get a little too crowded around noon and we headed out around 2 p.m.

And for those not in the know, swamp cabbage is harvested from the Sabal Palm when the bud  (or the heart) is about 3-feet-tall and the tree is about 3 to 5-years-old. For each tree consumed, several trees replace it.

Have ya tried swamp cabbage?