This will sound odd, but the Sarasota National Cemetery in Southwest Florida is a tourist attraction and I state that with the utmost respect. I visit a few times a year to find peace, clarity, and patriotism, and I imagine others visit with similar purposes. 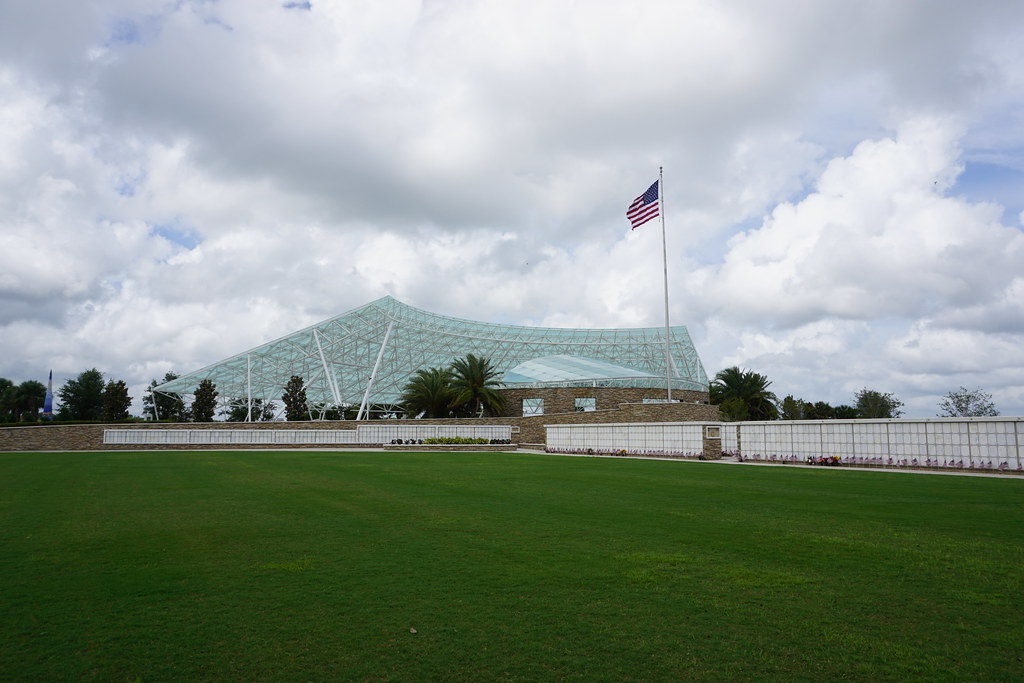 My first visit to the Sarasota National Cemetery was in 2011 to say goodbye to a friend nicknamed the Lure Doctor. He was a dentist and well-known wooden-lure maker who served in the U.S. Air Force during Vietnam. He and his wife lived in my Port Charlotte apartment complex and he sure did love fishing the area’s freshwater areas. Typically, I fall to pieces when attending funerals and memorials and this was no exception. It was my first military burial and it was patriotic, intimate, and respectful. Unfortunately, I was so upset with saying goodbye to my friend, I did not stay to tour the cemetery.

A couple of years later I visited with the sole purpose of exploring the perfectly manicured grounds and paying respects to those who served. All branches of the military are represented at the 295-acre Sarasota National Cemetery. Those who were discharged in any way other than dishonorable and meet minimum activity duty service requirements can have a burial in this and any other national cemetery. Spouses, widows, widowers, and minor dependent children are also eligible. 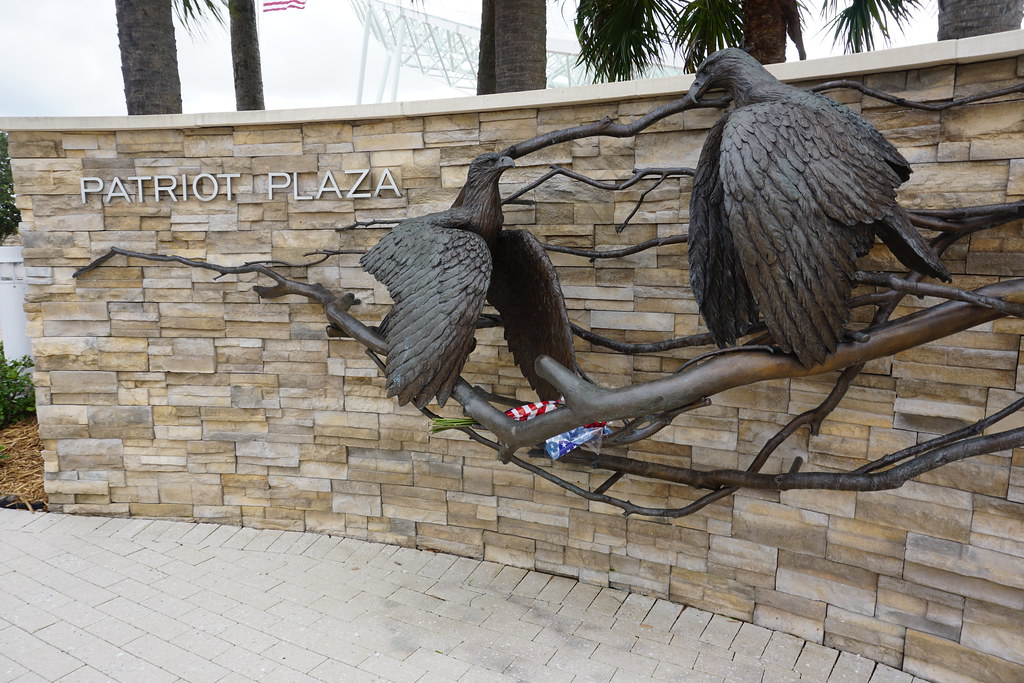 My visits typically begin with walking through the stunning Patriot Plaza, a 2,800-seat ceremonial amphitheater featuring a 20,800-square-foot glass covering, 80-foot-tall stainless-steel flagpole, and commissioned art representing freedom and inspiring patriotism. The 1.83-acre plaza was donated to the Department of Veterans Affairs, National Cemetery Administration by The Patterson Foundation. Every Tuesday at 10 a.m. (except holidays) a guided tour is led through the artwork. A collection of photos and plaques telling some of the U.S. military’s history encompasses the plaza.

Next, I find a section of the cemetery I have not previously walked. Slowly and purposely, I amble along the white limestone headstones. I wonder what service was like for those buried beneath and what their life was like after serving. Most buried belong to those who served in WWII, Korea, and/or Vietnam. 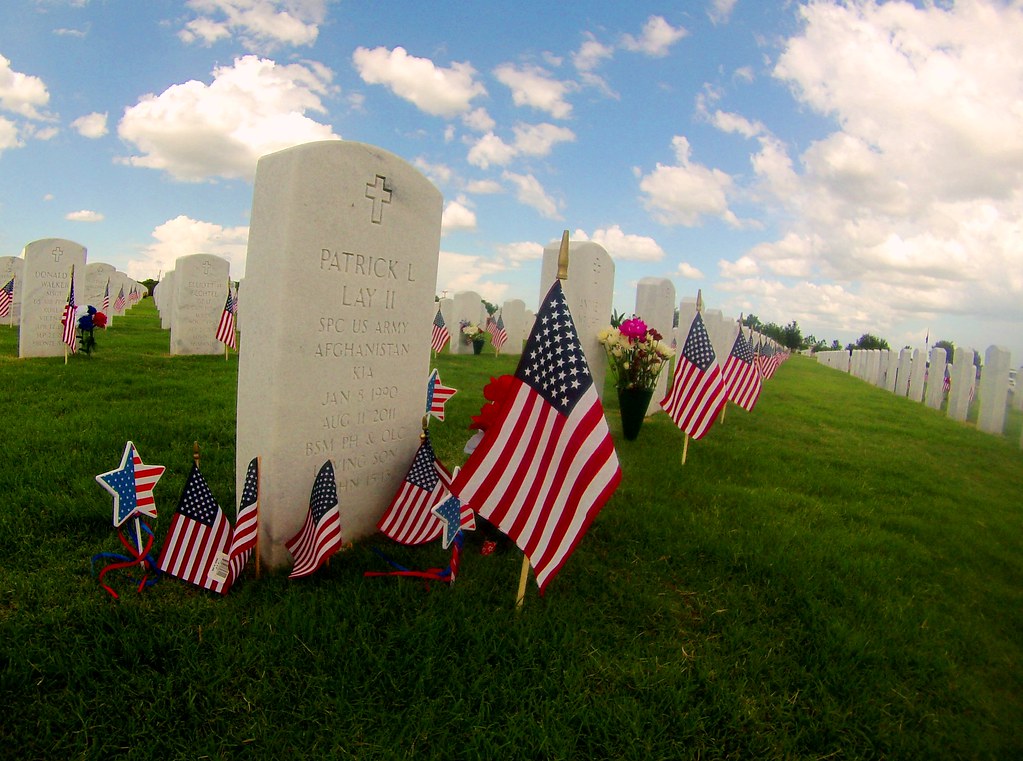 During a Memorial Day visit, one of those headstones stopped me in my tracks and my eyes welled with tears when I read “KIA.” I calculated this soldier was 21 years old when he was killed in action. Just 21. I have lived more than twice the life he did and I wept for his service and sacrifice.

Upon returning home, I searched for his name online. The grave belongs to Army Spc. Patrick L. Lay II of Fletcher, N.C., killed on Aug. 11, 2011, by an improvised explosive device blast in Afghanistan. He was in Company C, 1st Battalion, 32nd Infantry Regiment, 3rd Brigade Combat Team, 10th Mountain Division and was killed with four other soldiers. So, so young. I never met him or his family but his selfless act of serving our country and making the ultimate sacrifice in the name of preserving our liberties tells me everything I need to know about him. A Facebook page keeps his memory alive by a family and country who misses him. 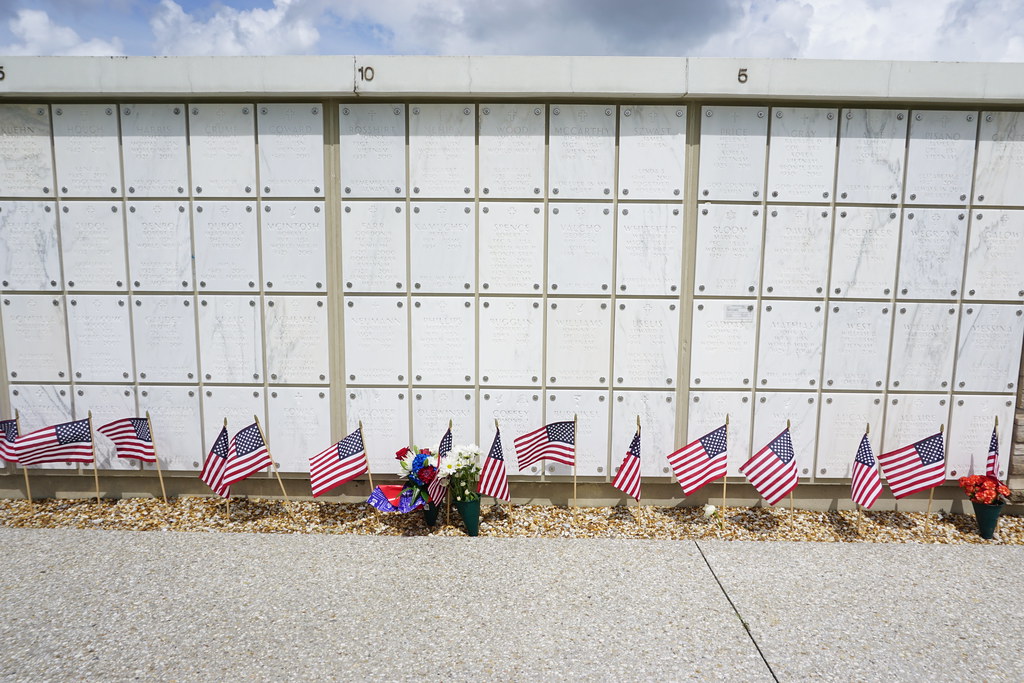 Consecrated in December 2008, the Sarasota National Cemetery is located east of Interstate 75 on State Road 72. An information center offers an electronic gravesite locater, and visitors can see gravesites, crypts, a memorial walkway, and have the comfort of restrooms. The Sarasota National Cemetery is one of nine national cemeteries in Florida. The others are Barrancas (at Naval Air Station Pensacola), Bay Pines, Cape Canaveral, Florida (in Bushnell), Jacksonville, South Florida (in Lake Worth), St. Augustine, and Tallahassee.

National cemeteries hold thousands of stories to tell, like those of my friend, the Lure Doctor, and that of Army Spc. Patrick L. Lay II. Visiting keeps their memories alive and shows respect for their service. Our national cemeteries honor those who served, show us where we have been as a nation, and should help us shape our tomorrow.