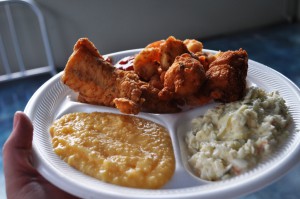 Have you eaten your fresh Gulf seafood lately? April 20, 2011, marked the one-year anniversary of the Gulf Oil Spill and it seems as though not everyone has received the memo about the safety of seafood harvested from the Gulf of Mexico and sold commercially. When I attended the Florida Outdoor Writers Association Annual Conference hosted by the Visit Tallahassee last August, I learned about measures in place to ensure what comes off the boat to table is indeed safe to eat.

Dr. Steve Otwell, professor of seafood technology at the University of Florida in Gainesville, Fla., and with Florida Sea Grant, discussed the HOW program which was established following the spill to assist the commercial seafood industry. As the name implies, Harvest from Open Water (HOW) is based on principles of harvesting seafood in open fisheries and waters and NOT in areas closed off. 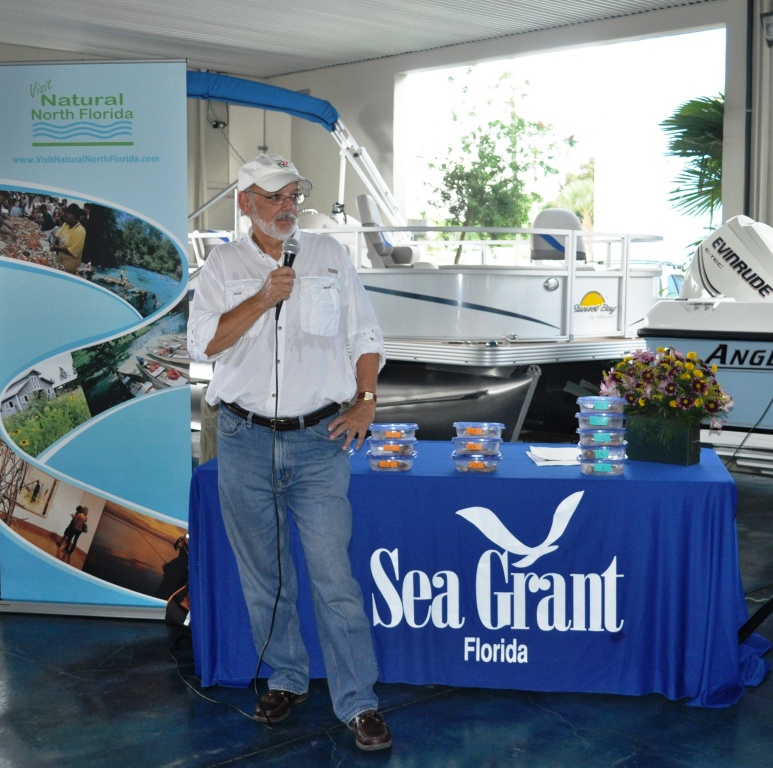 A Little Organoleptic Analysis
Otwell explained how HOW’s commercial practices can easily apply to recreational fishing and he did this by bringing shrimp treated with crude oil brought in from the Deepwater Horizon site, shrimp treated with diesel and shrimp not treated with anything. Shrimp were treated at levels of 1 to 3 ppm, 5 to 8 ppm and 12 to 15 ppm (ppm = parts per million). He then let attendees participate in an organoleptic analysis (sensory assessment, i.e.: sniff test) to smell for ourselves.

While I wasn’t too keen on smelling decaying shrimp soaked in varying levels of oil right after the seafood lunch, I played along. Basically, very few people, about 10 percent, could detect the 1 to 3 ppm crude treated shrimp, which is typical of the general population. As the crude level increased, it still wasn’t an overly powerful odor. When the diesel-fused shrimp made their appearance…whew! As the level increased, these puppies became stinkier and after taking a whiff of 12 to 15 ppm, my fried shrimp lunch tried to make a reappearance. 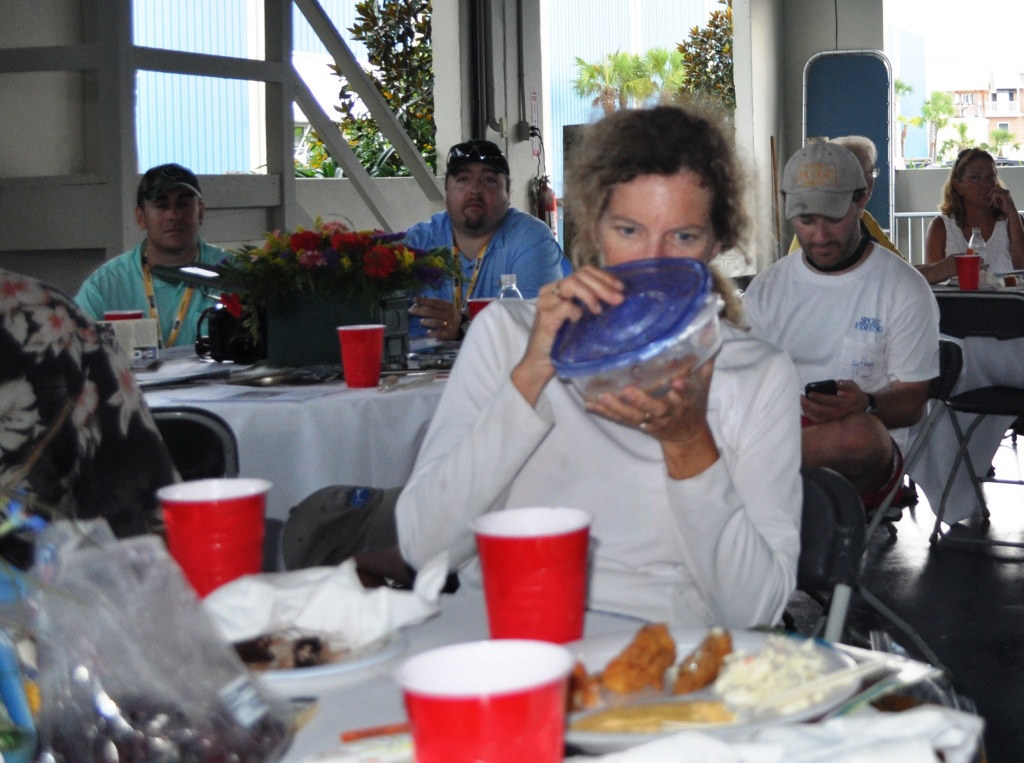 The professor explained in order for something to penetrate and pollute sea life (seafood), it needs to be volatile. Crude oil, as it was gushing from the Deepwater Horizon site, was unrefined and in a natural form. Diesel used in the shrimp examples was refined.

“The nose is powerful,” he said.

What I took away from this experiment is if seafood is stinky, stay away, which would indicate a high concentration of crude. Or, in the case of recreational fishing, it could indicate sloppy boat housekeeping. Fuel sometimes spills on boats and fuel ends up on rags, hands and other things and could make their way to the caught seafood. 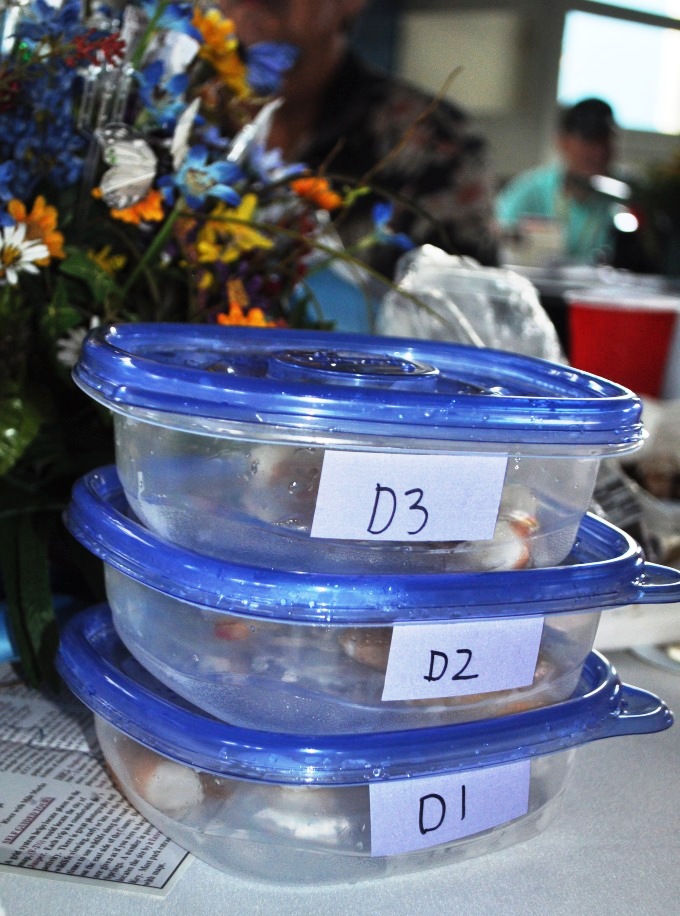 “You won’t eat seafood and get sick that night or the next day,” Otwell said, adding the quantity of consumption is a factor. I imagine eating excessive amounts of tainted seafood on a daily basis over years of time would make one sick so it’s important to use common scents, err, sense, if it smells as though your oysters have been marinaded in crude oil, stay away! 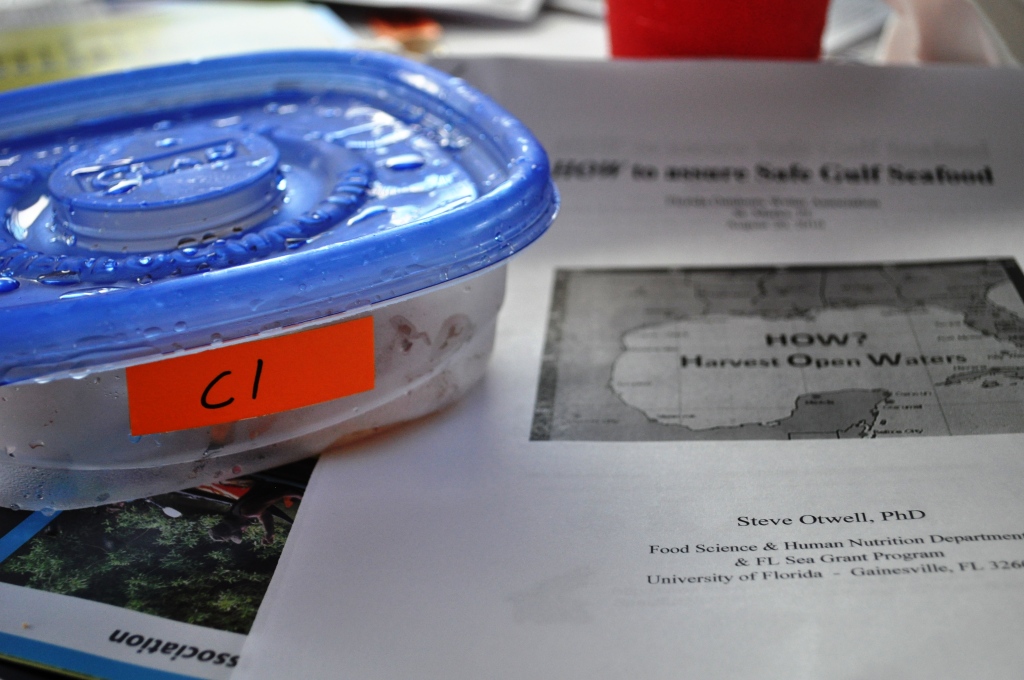 HOW to Assure Safe Gulf Seafood

Rest assured, there are precautions to ensure the Gulf seafood on your table is safe and the nose isn’t the only measurement. Chemical analysis of fishing areas reopening following a closure is performed. Corporations who have joined the HOW program to ensure seafood delivered to the consumer is safe include Darden Restaurants, Publix and Whole Foods.

As of April 19, 2011, NOAA has reopened all federal waters closed in response to the Deepwater Horizon Oil Spill. Visit the NOAA Fisheries Services website for additional information.

Thanks to Original Florida for hosting such a lovely lunch in St. Marks.