Home » Politics » Presidential Inauguration: Why TSA Made Me Throw Away My Camera #inaug2013

Presidential Inauguration: Why TSA Made Me Throw Away My Camera #inaug2013 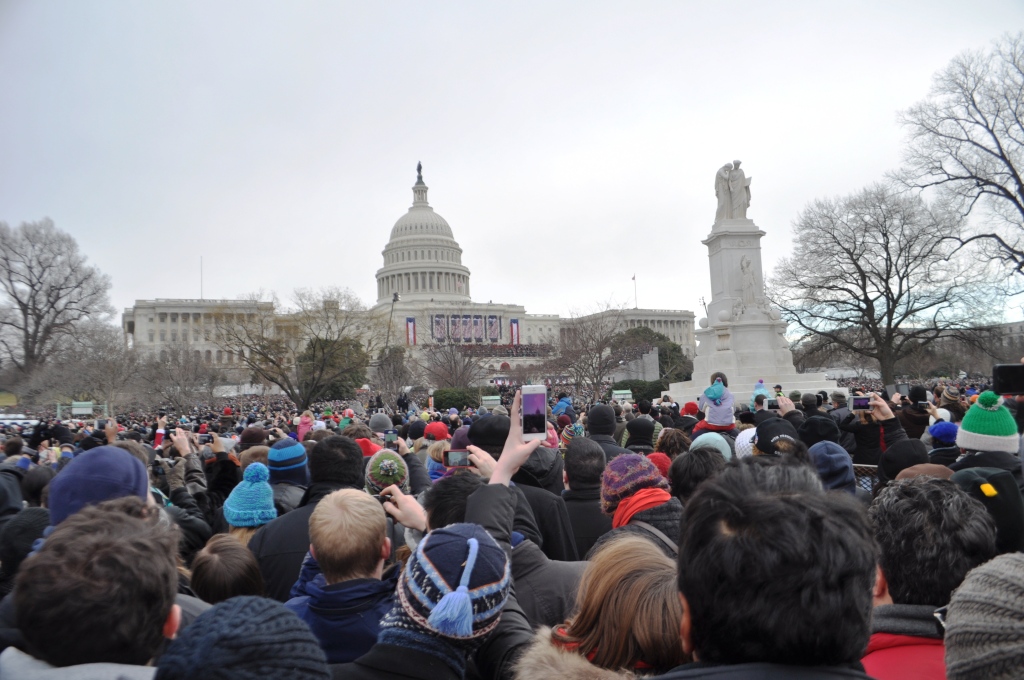 Attending the 57th Presidential Inauguration swearing-in ceremony was an amazing opportunity. On Jan. 21, 2013, it was just me, a friend from Port Charlotte, Fla., and about a million others in front of the U.S. Capitol sharing in this red-white-and-blue-moment of American patriotism. 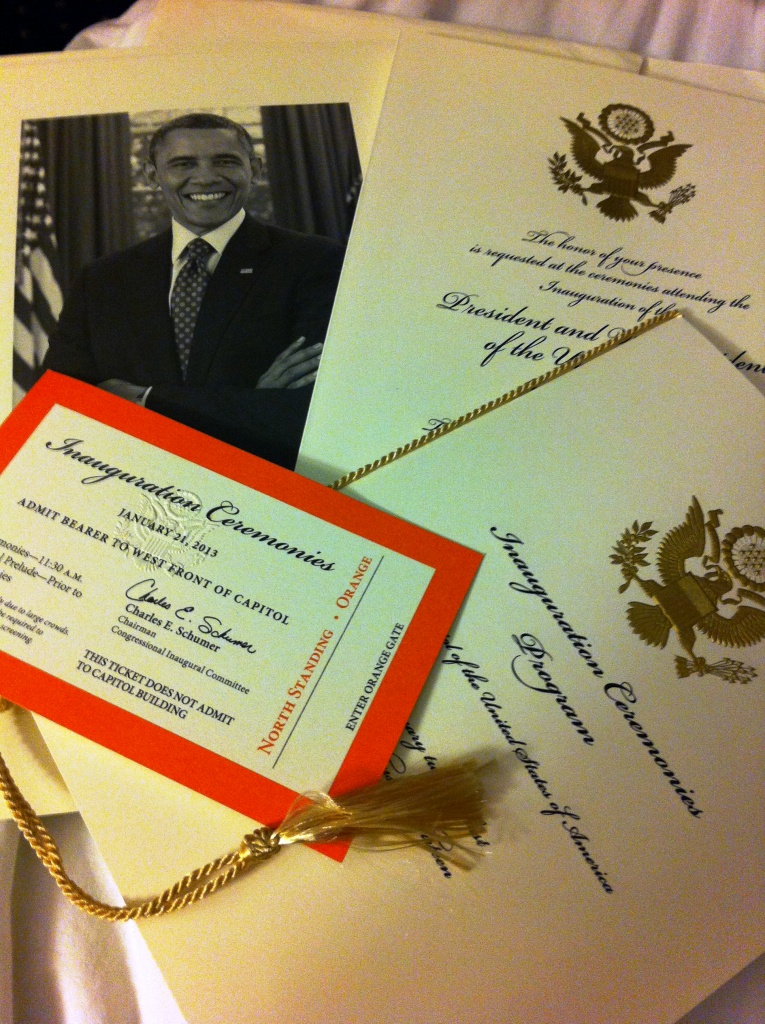 Invitation and Ticket for the 57th Presidential Inauguration, Jan. 21, 2013

As you can see from the top photo, I had a pretty good view of President Barack Obama’s and Vice President Joe Biden’s swearing in for a second term. (Although, I couldn’t see whether Beyonce’s mouth was in sync with the music.) My ticket, which I received from another friend, was for the Orange Section but for a medley of reasons, we ended up in the overflow ticketed area. 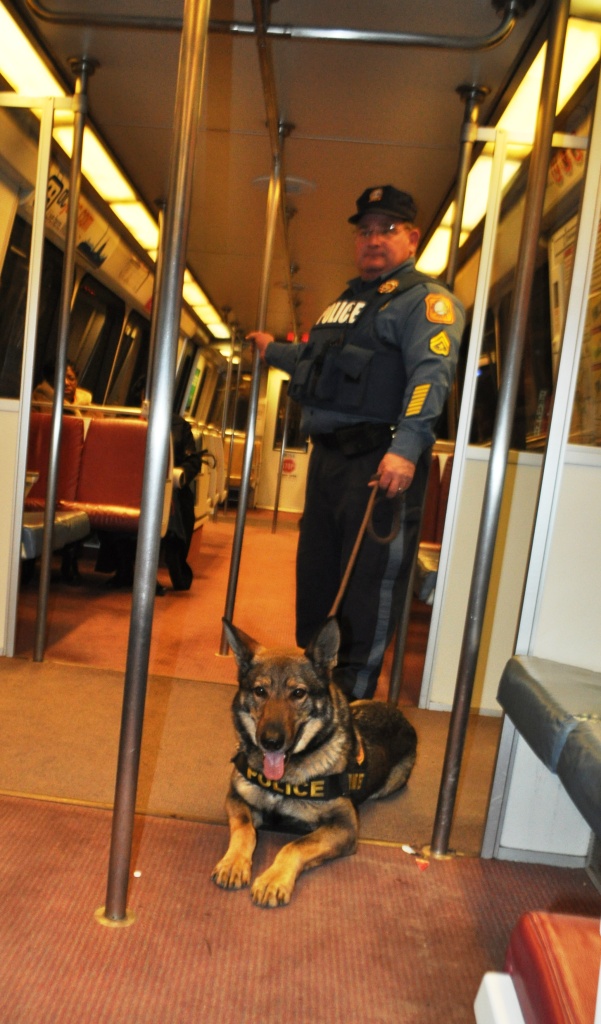 Allan and His Handler Were one of Several K9 Teams that Traveled to Keep Inauguration Attendees Safe, Washington, D.C., Jan. 21, 2013

I Vowed Not to Miss a Moment

Armed with two smart phones, my Canon PowerShot Elph and Nikon D5000 – along with four or five layers of clothing – I was ready to document my presidential inauguration experience. Riding the Metro, we met Allan and his handler, a K9 team from Cape May, N.J., that traveled to the inauguration to keep attendees safe. Since my Elph was around my neck for those not-to-miss moments, I grabbed it to snap a photo of Allan (with permission) but something was wrong.

I depressed the button again yet the camera wasn’t working which is when that sinking feeling in my gut knew what the problem was. When I woke up that morning, I remember looking at the charged battery in one of the hotel room outlets and made a mental note to pop it in the camera.

Well, I lost that mental note and didn’t insert the battery.

Rats! But no biggie. I just placed it in my bag and would rely on my “real” camera and smartphones. 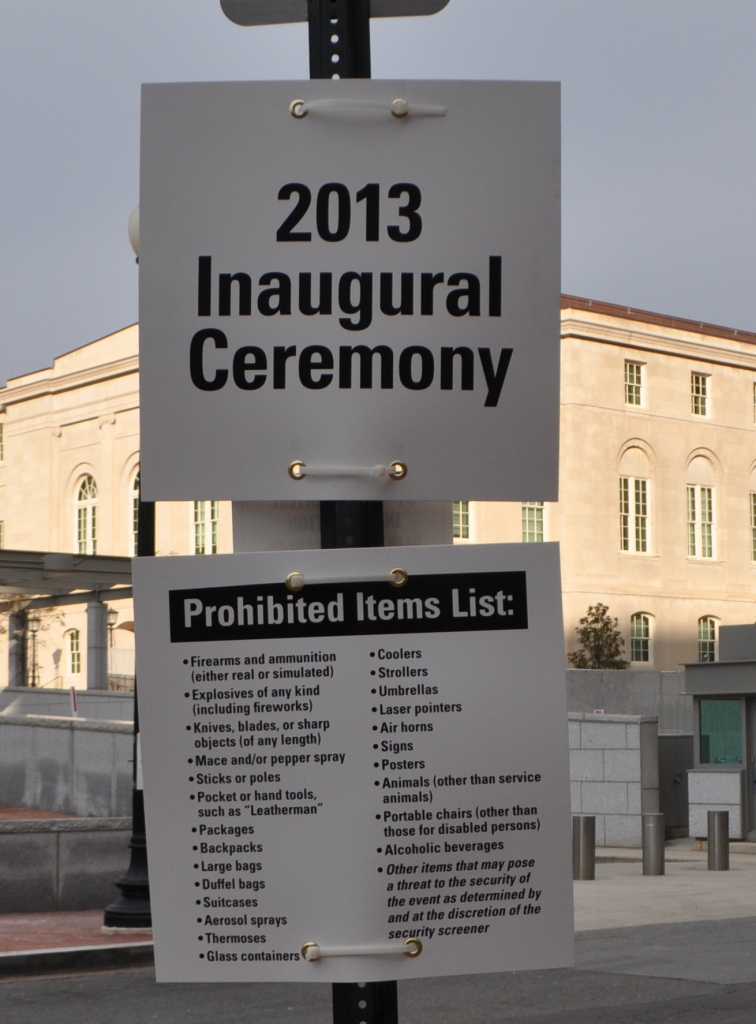 Cameras with Batteries Pose a Threat to National Security. Who Knew?

Since this wasn’t my first rodeo, I knew there would be airport-like security run by the Transportation Security Administration (TSA) with some leniency such as, I knew my boots could stay on. What I wasn’t prepared for still makes me sick.

As we approached the tent, I heard TSA agents yelling about electronic items needing to be removed from bags and powered on.

How was I going to do that without a battery?

I could have acted dumb or I could have tried to bury my camera in my bag or coat – which I had to take off to be inspected while I walked through a metal detector- but I was honest. (Darn that being honest thing!) I told the TSA agent I forgot my battery so my camera wouldn’t turn on.

She was very nice and suggested I find someone with a battery, but since we were at the end of the line, the only couple left didn’t have one. 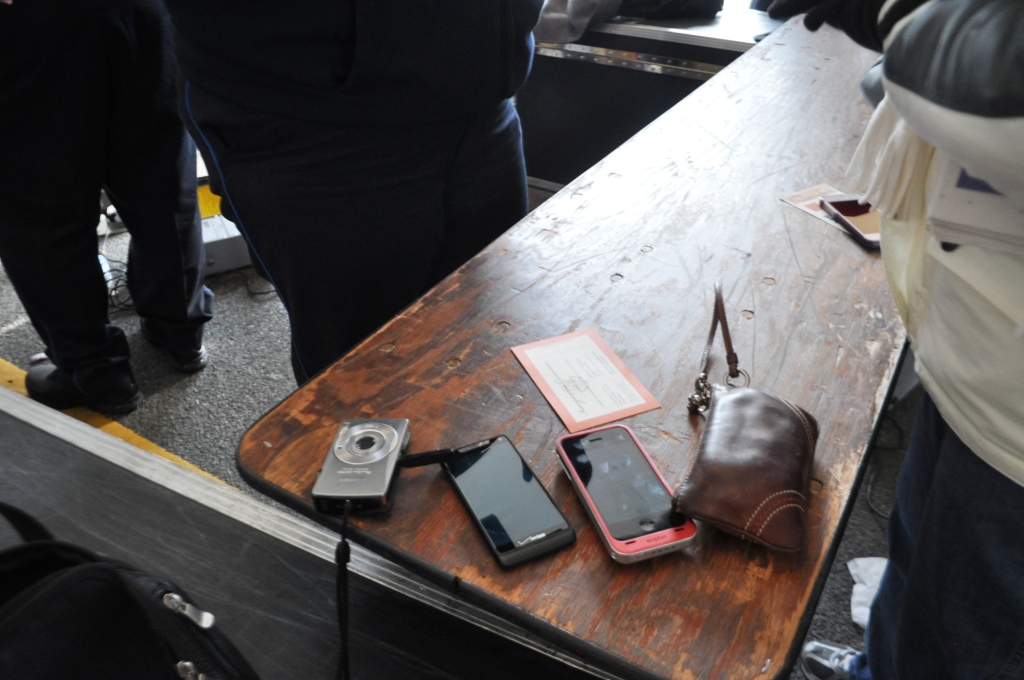 My Canon Elph is On the Left, Last Time I Saw Ir Before Putting it in the Trash, 57th Presidential Inauguration, Washington, D.C., Jan. 21, 2013

The options the TSA agent gave me were to throw it out right there or outside. I suppose I could have given up my ticket to join the general population. Or, I could have gone outside and tried to hide it and pick it up on the return but after removing the memory card and strap, I placed it on top of a 12-pack of water next to another digital camera with the same issue.

I can’t say how long I’ve had that camera – maybe four or five years – but I do know it documented my 2009 presidential inauguration experience and it’s been reliable and convenient on my travels near and far. 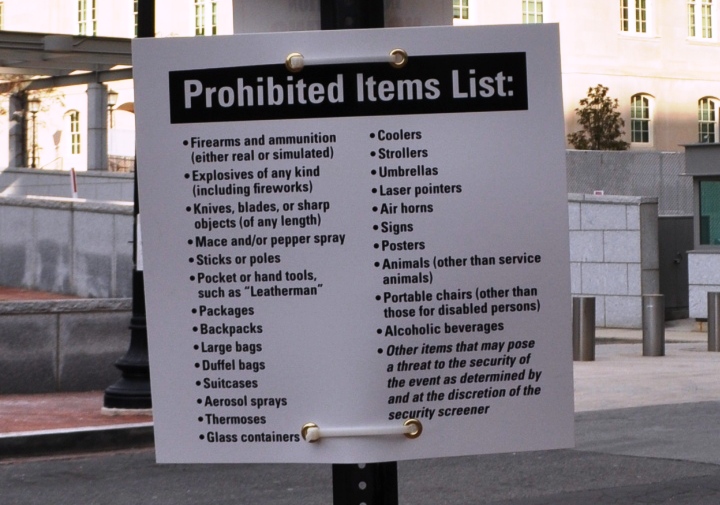 List of Prohibited Items into the Ticketed Areas of the 2013 Inaugural Ceremony. Let Me Zoom In – Do You See Anything About Cameras Without Batteries? Washington, D.C., Jan. 21, 2013

Following the ceremony I returned to the security tent in search for my camera. There was the 12-pack of water but my camera, along with the other camera, were gone. I looked through a couple trash bins and didn’t find it. A law enforcement officer directed me to the  “confiscated” area (which I wasn’t aware of) where several cameras sat alongside other items as water bottles and insulated cups.

I could have been dishonest and taken one of those cameras but didn’t. Of course my “should’ve, could’ve, would’ve” thoughts reminded me of my stupidity of not remembering to insert the battery and regretting I didn’t step on my camera or rip off the battery door in order to destroy it so no one else could enjoy it. 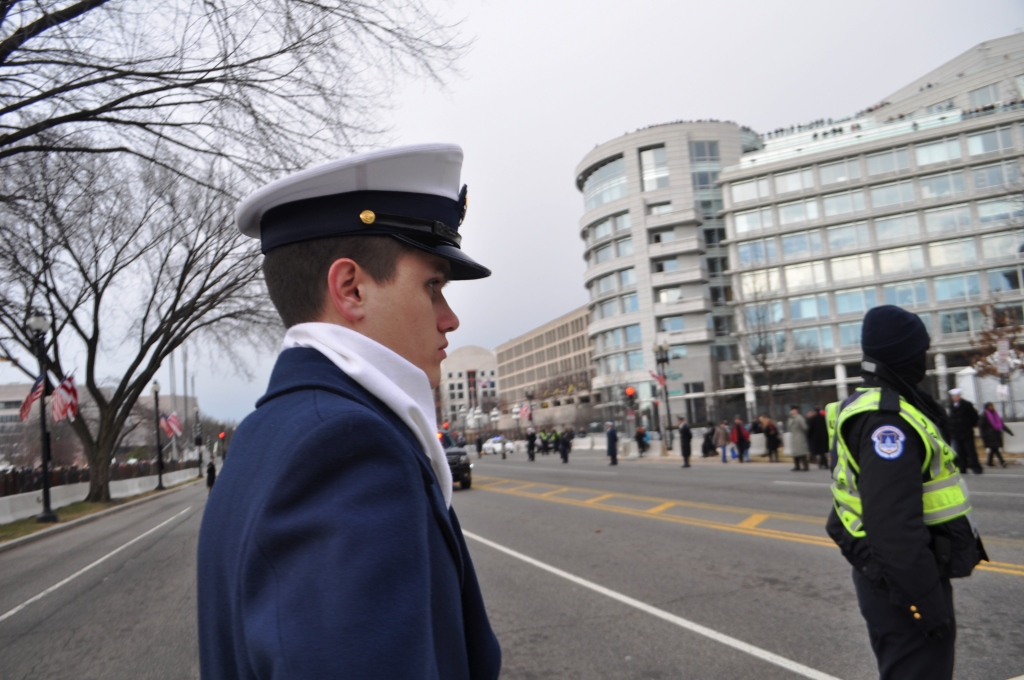 Truth is, I was mad at the system. Nowhere on the posted signs or on the 57th Presidential Inauguration website does it state electronics need to have power in order to clear security, although it didn’t matter because I still would have forgotten my battery.

If you read the list of prohibited items, I suppose electronics without power fall under the “Other items that may pose a threat to the security of the event as determined by and at the discretion of the security screener.”

Really??? That statement indicates ANYTHING else could be tossed.

What makes me outraged is if my camera sans battery was a threat, why wasn’t it immediately placed into a bomb-proof box and contained? (Or maybe it was whisked away after I left.) And if all those other camera, insulated mugs and water bottles were threats, why weren’t they contained? I really hope those of you who attended the inauguration felt safer because I wasn’t allowed to bring in my camera. 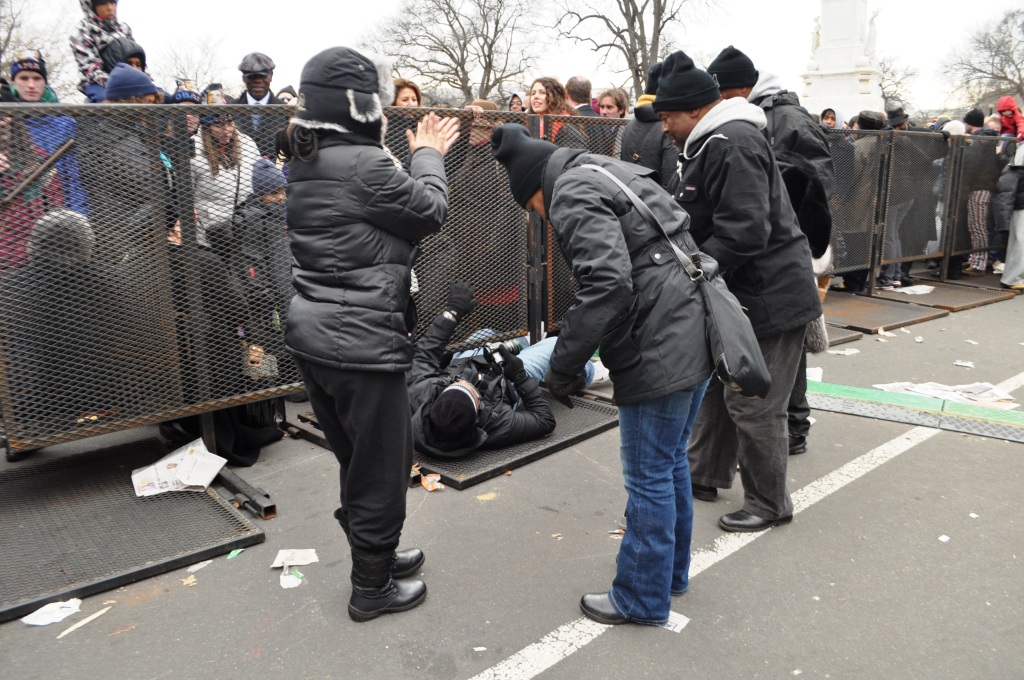 I realize my first-world problem is nothing in the grand scheme of things but this put a damper on my patriotic spirits. Photography has been part of my life since I was a kid and it makes me sick throwing away a perfectly good piece of equipment.

I remember in the months following 9/11 when traveling for business, I had to turn on my laptop and other electronic equipment when randomly pulled from flight boarding lines. My laptop battery was weak and I always held my breath as it booted up, hoping it would last long enough for airport security/TSA. I always wondered what would happen if my battery did die. Would they have taken my laptop? Or would they have let me plug it in? Thankfully I didn’t get to find out.

I do want to know…

Is there a logical explanation as to why TSA made me throw away my camera? Please enlighten me. 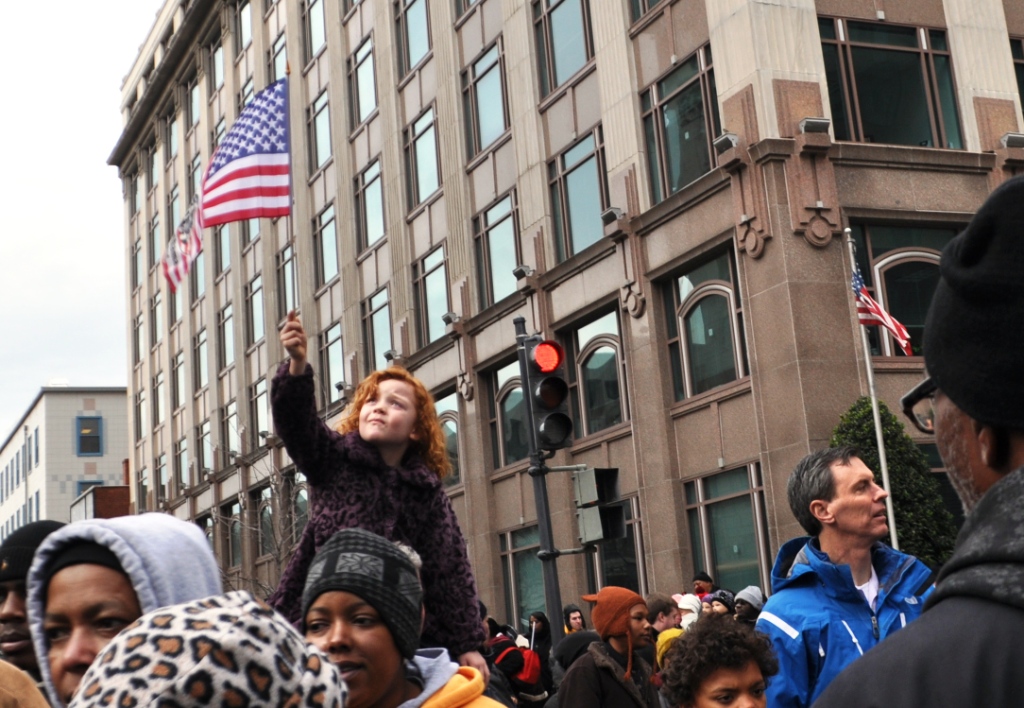 In all my frustration, while leaving the swearing-in ceremony in an attempt to find a Metro or something to eat, I looked up to see this pretty redheaded girl (pictured above) watching her American flag dance in the breeze. She swished her flag back and forth while wearing  a charming little smile. Who knows if she’ll remember this day when she’s old enough to vote but kudos to her family for letting her experience Obama’s inauguration.

View my additional photos of the 57th Presidential Inauguration on Flickr.