Presidential Inauguration: Ball Wasn’t All that and a Bag of Chips…Just a Bowl of Pretzels #inaug2013

Home » Politics » Presidential Inauguration: Ball Wasn’t All that and a Bag of Chips…Just a Bowl of Pretzels #inaug2013 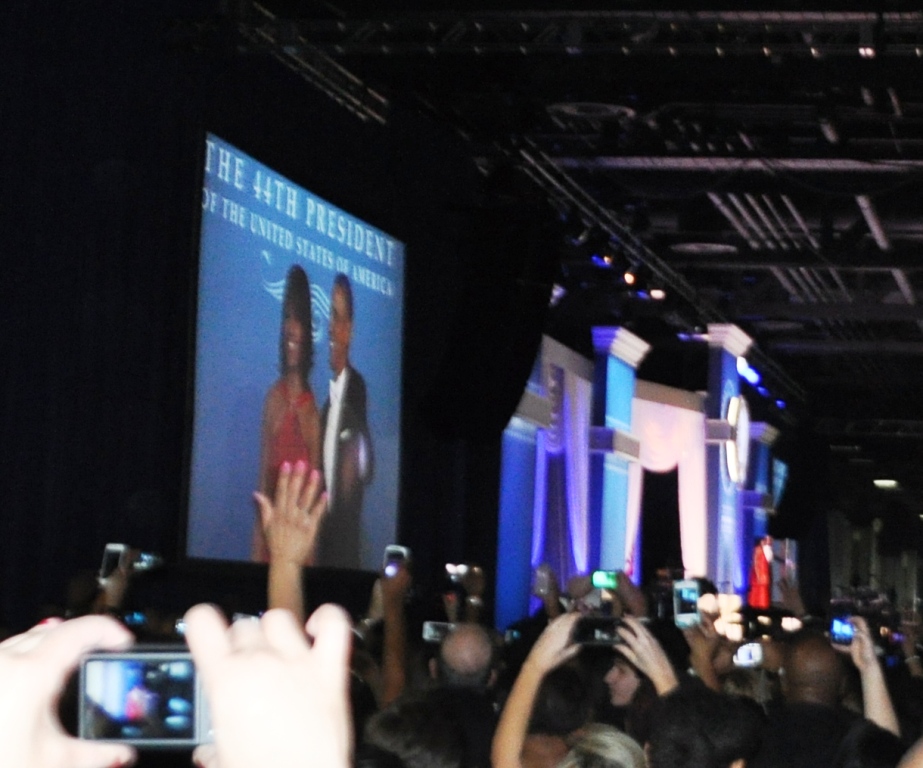 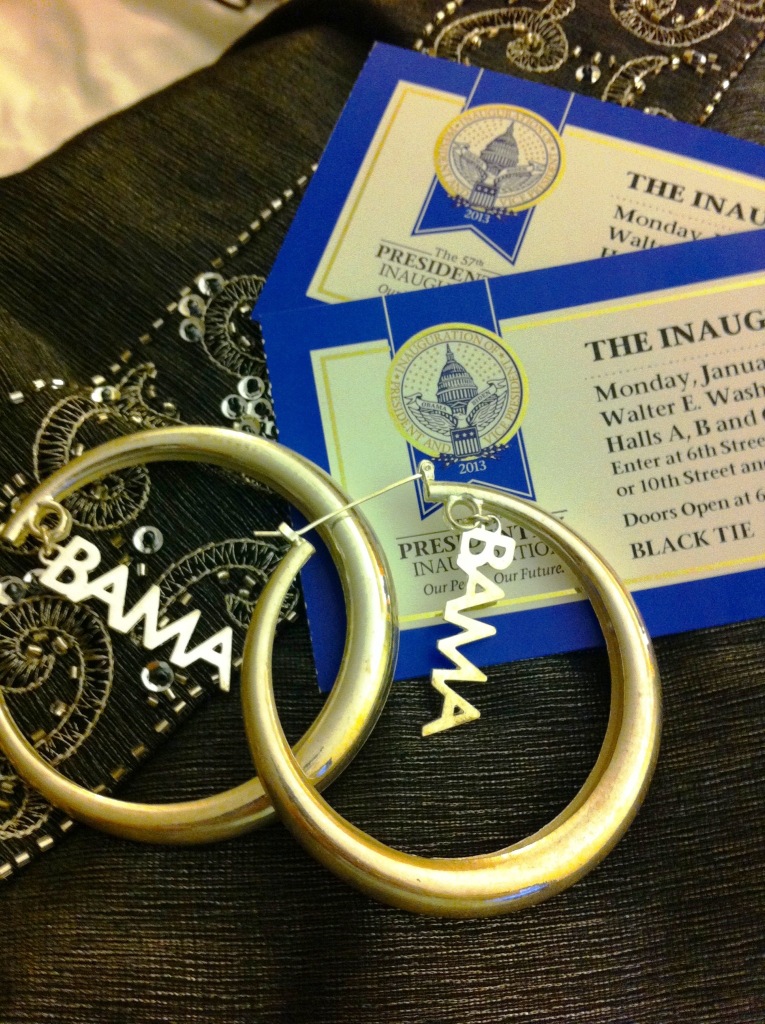 I was aware of the Commander In Chief’s Ball for members of the Armed Forces and the Official Inaugural Ball for Guests and the Public in which I was able to purchase two tickets despite the TicketMaster snafu. The cost? $60 each plus shipping, about half of what it cost in 2009. 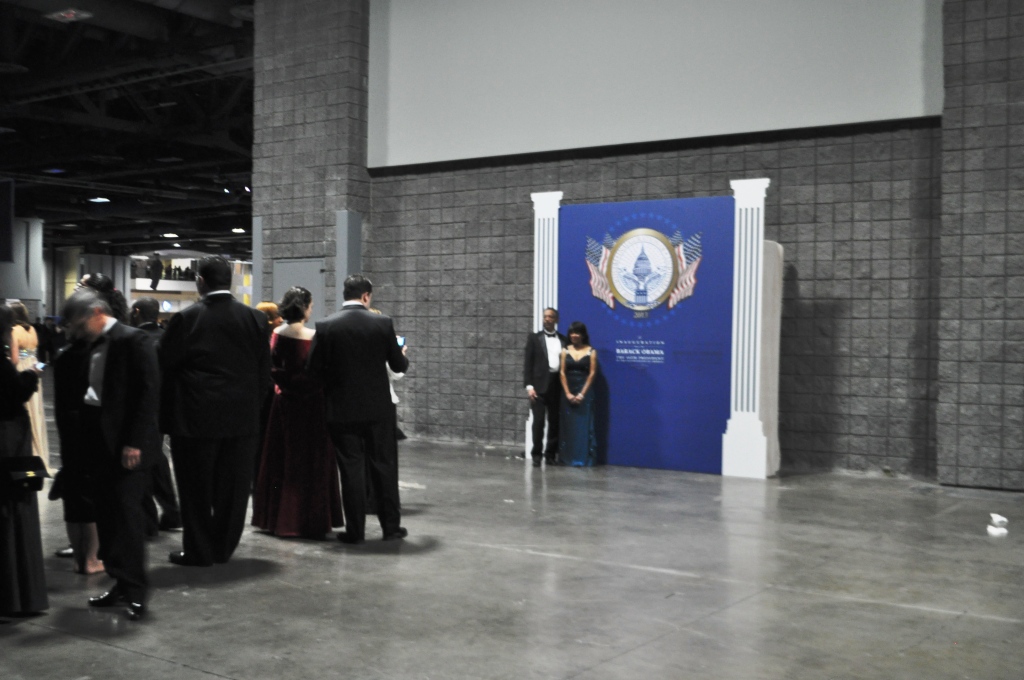 Green and Blue Tickets: Separate and Not Equal

I met up with my friend Cordelia (check out her travel blog, Cordelia’s Journeys) whom I attended the 56th Presidential Inauguration with and we compared ball tickets. While my tickets were blue and stated doors opening at 6:30 p.m. for an 8 p.m. start, her tickets were green and stated doors opening later with an 8:30 p.m. start. I also noticed the tickets stated the balls were taking place in different ballrooms of the convention center.

Could there be TWO BALLS within ONE BALL? Turns out…yup. From people I spoke with in line for my swearing-in ceremony tickets, on the Metro and in line to get into the ball, it appears green ticket holders were those who worked on the campaign, were major donors and friends of the Obama administration. Blue ticket holders seemed to be those of us who purchased tickets. (I could be wrong but I’m guessing I’m right.) 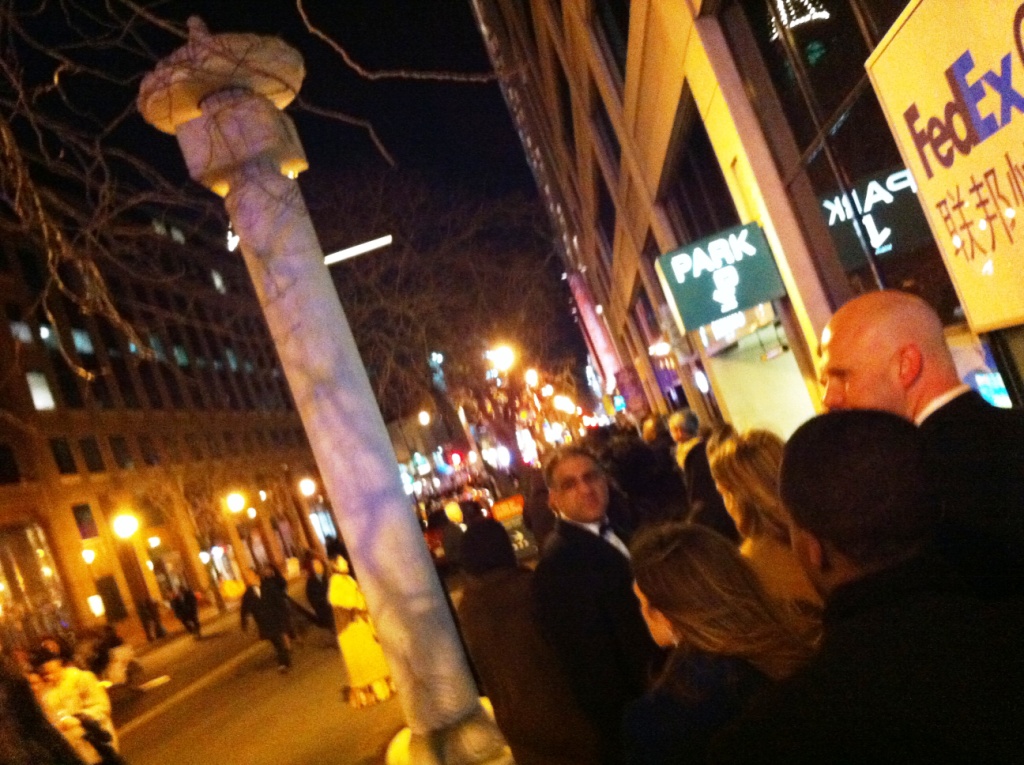 Standing Outside in 20-some-degree Weather Waiting to Enter the Convention Center, Jan. 21, 2013

Brrr, Baby It Was Cold Outside

For a medley of reasons, my travel companion and I arrived at the convention center later than anticipated and along with thousands of our new friends, ended up finding the end of the line back where we started after chasing it for a good 10 or 15 minutes. We stood in line at least 45 minutes in 20-something-degree weather but at least we were smart about it – we wore comfortable shoes and brought our glam shoes in a bag which we left at the coat-check – and wore coats. Some ladies in their amazing, strapless gowns opted for fashion over sensibility and ended up grinning and baring it in the name of looking good in line.

[Random Sidebar: Although I haven’t confirmed it, a young couple heading to the green ticket ball on the Metro with us received a text from one of their parents who was at the convention center, stating there was a gas leak preventing people from entering. Perhaps this was why there was a really, really, really long line to get in? I give kudos to the National Guard and Destination DC for having staff and volunteers directing us before and after the ball.]

By the time we reached the airport-like security entrance (not quite like the swearing-in ceremony earlier in the day), my legs, fingers and nose were numb. But that was OK, I defrosted while waiting in the coat-check line another 20 or 30 minutes before heading downstairs to the… 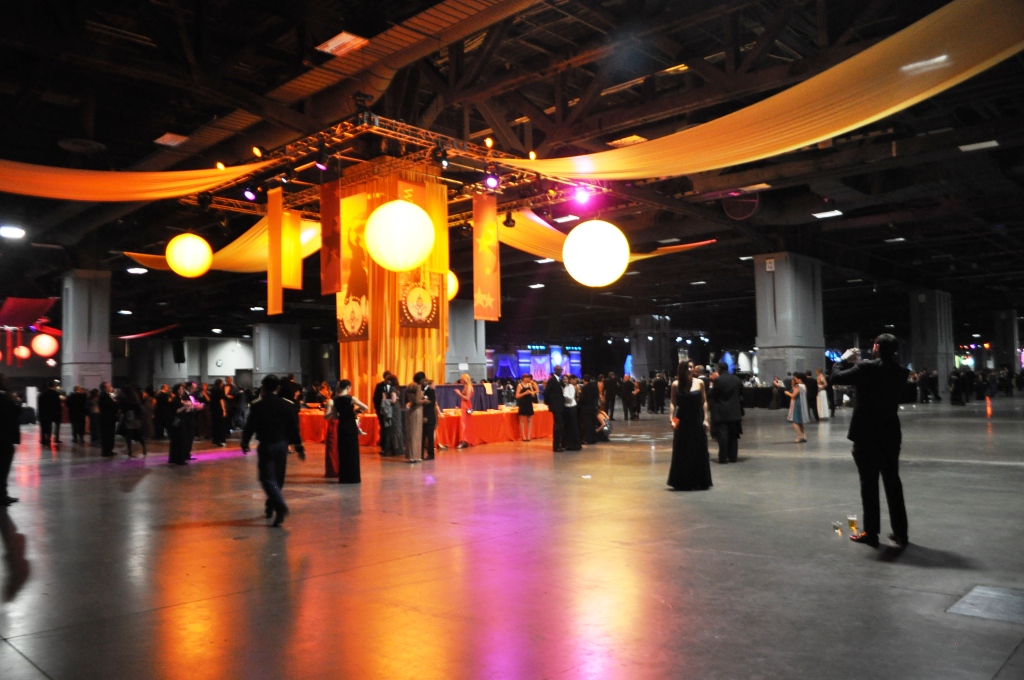 Snapshot of the Official Inaugural Ball – the One for Those Who Purchased Tickets from TicketMaster, Washington, D.C., Jan. 21, 2013

“This is a poor man’s ball,” I overheard one of the attendees say as I stood on the concrete floor of the Walter E. Washington Convention Center while waiting to purchase my bottled water tickets. There was no carpeting and having planned events, I know the cost of carpeting is pretty pricey.

Another way the Presidential Inaugural Committee (PIC) cut expenses was on food. What would you expect to be served at a black tie affair? If you said bowls of pretzels, party mix and Cheez-Its, bingo! You’re right!  I guess these food items fit into the First Lady’s battle against childhood obesity. To be fair, I remember pretzels and potato chips during the last inauguration.

I also didn’t see any chairs or tables, with the exception of the media area and a special guest area off to the side. People in there actually had a place to sit and eat, although I didn’t see what they were munching.

They also had a souvenir table set up inside the ball and upstairs so attendees could purchase inauguration mementos. I thought this was a little odd but thought the PIC was clever in another attempt to raise funds. I also appreciated it since I really hadn’t picked up official souvenirs. I really didn’t care I looked like a tacky tourist carrying around a bright blue plastic bag of souvenirs.

Let’s carry on to the Official Inaugural Ball experience… 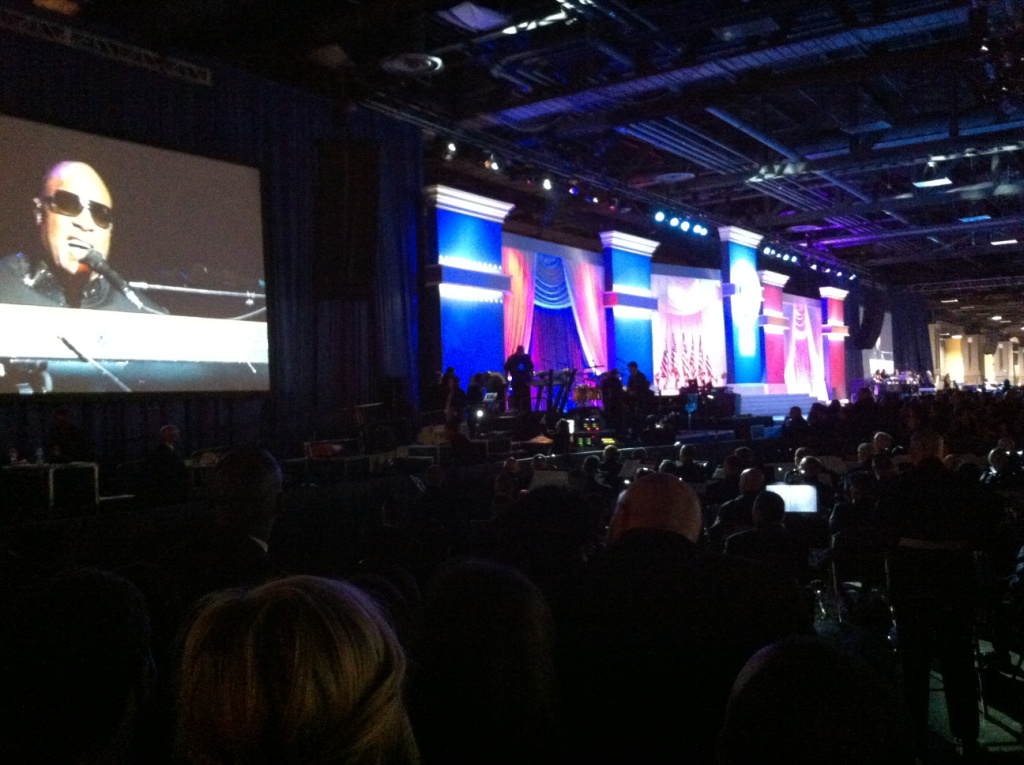 With blue ticket in hand, which no one really looked at nor was it scanned (like the last inaugural ball I attended), we reached the top of the escalator to head down into the convention center’s belly when I looked out onto the floor to see President Obama and the First Lady dancing!

A wave of disappointment washed over me as we joined others on the convention center’s bare floor. I wanted to cry yet looking on the positive side, I did see the last minute of their dance while Jennifer Hudson serenade the First Couple. Yes, I had my moment in 2009 for Obama’s first inauguration but was hoping to do and see the things I missed then during the 2013 event. The short of it, it didn’t happen. 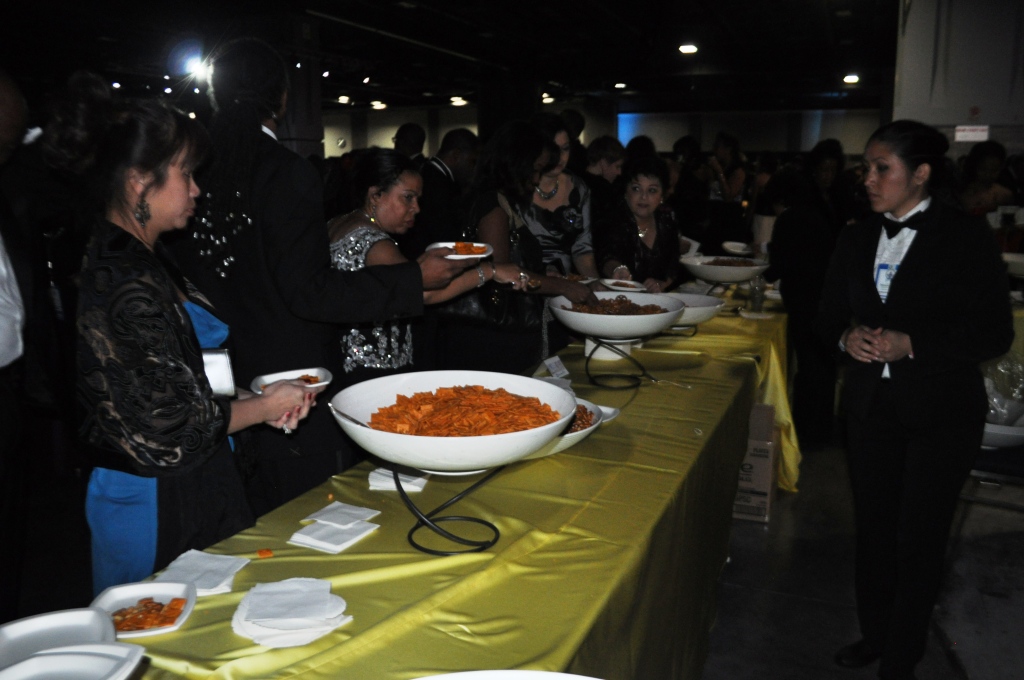 Although we missed Brad Paisley’s performance, we were treated to an energizing set by Stevie Wonder (worth the price of admission right there); Glee stars Amber Riley and Darren Criss; John Legend; and Soundgarden (yes, Soundgarden – who wrapped up the evening which caused a mass exodus when they started jamming). We did see Jamie Foxx perform as Vice President Joe Biden and Dr. Biden dance, followed by the VP trying to steal a kiss from Foxx. 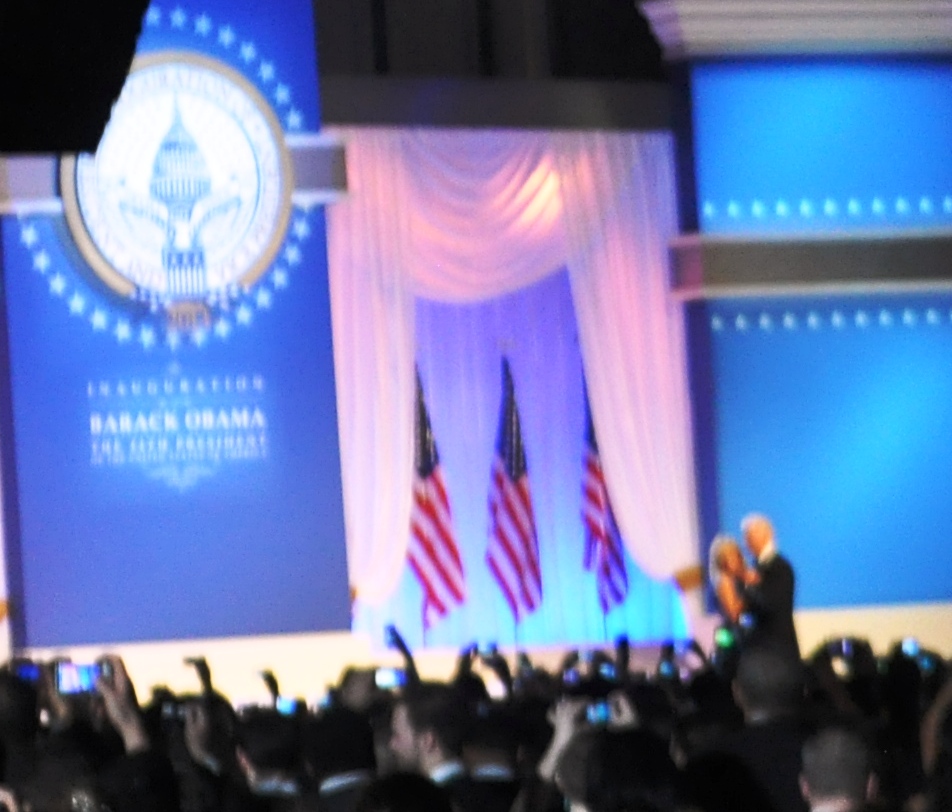 Is that Green with Envy or Just Jaded?

“I got to see Katy Perry up close,” my green ticket ball attendee friend told me. Before departing the Courtyard New Carrollton Landover (conveniently located at the end of the Orange Metro line) for the ball, we tuned into CNN which rattled off anticipated performers including Katy Perry, Usher and fun.  Turns out they did perform, only for green ticket attendees. 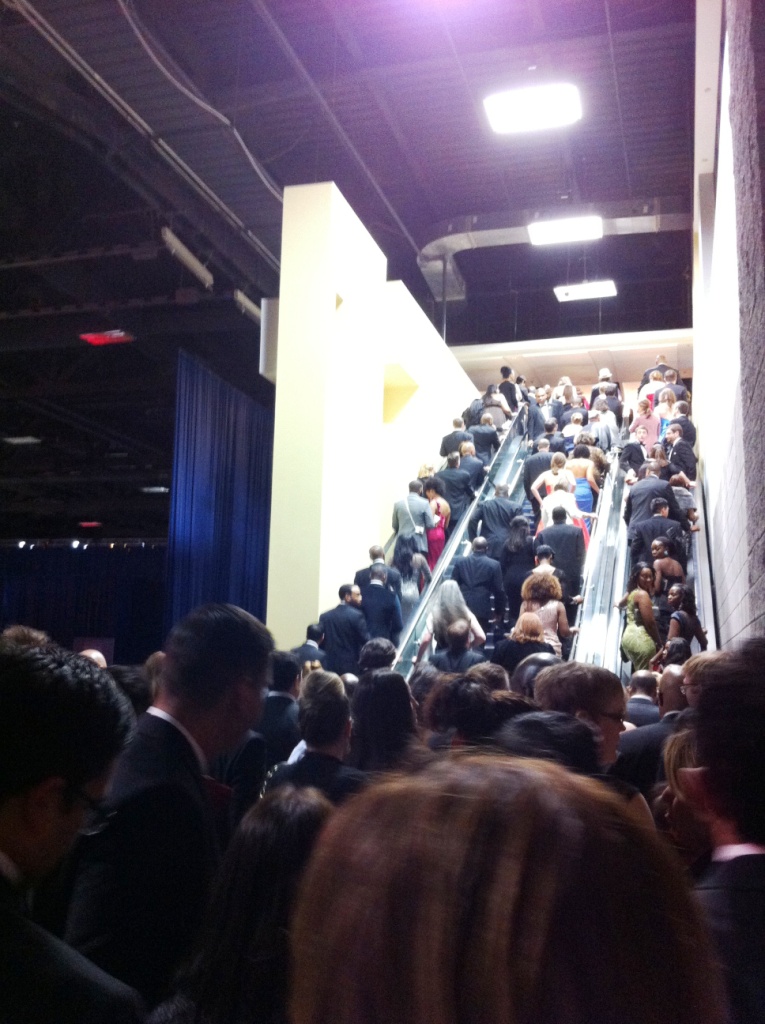 Honestly, the evening flew by and am honored I was there to be part of history. Well, I’m sure what y’all saw at home, what’s circulating on the Internet and what will be documented in history will be from the green ticket ball, but who will know (or care) years from now? I know I was fortunate to have this opportunity and happy I was able to introduce someone else to it.

Although I had my “prom” moment in 2009 and this inauguration just didn’t have the shine like I remembered, I must say I much preferred Mrs. Obama’s red Jason Wu gown rather than what she wore during the last inauguration.

Were the two balls separate but equal? Perhaps, however call me jaded. It wasn’t all that and a bag of chips. Just a bowl of pretzels (and Cheez-Its).

Disclosure: This post contains affiliate links to support this blog and my traveling habit.