Home » Solo with Others » Lying for a Ride: September 11

Lying for a Ride: September 11 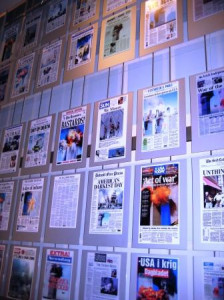 While this was happening during my day, my now friend Cham was on her way to the road show flying from Tampa to Providence, Rhode Island, but her flight was grounded in Philadelphia as all flights were immediately grounded by the FAA. Rather than expressing concern on how to get home, the dedicated worker found a way to get to Rhode Island: she lied.

She went to a rental car counter and said she had a reservation. The clerk couldn’t find it. “I know I made the reservation,” she said convincingly.

“I’m giving you the last car,” the clerk replied, and she did. Unfortunately, the car rental companies at this time were charging renters by the mile as compared to unlimited miles and were charging one-way drop off fees.

Of course Cham didn’t have a reservation, she was supposed to land in Providence. Cars were scarce because everyone was trying to find a way home due to suspended air travel. As she describes it, picking up the car was like looking at a picked over Thanksgiving Day turkey with all that’s left is the bones and a scrap of meat. The parking lot was empty with the exception of the little car sitting in the middle. It had four wheels – and not much else. While the rest of us were holed up in our hotel rooms and eventually at the show, Cham was driving to meet up with us and she arrived just before 10 p.m.

The next day was Wednesday, Sept. 12, and we drove to our next destination and there was something wrong with Cham’s car. It smelled of and was leaking fuel. At this point, we had decided we were  driving back to Florida (from New England) at the end of the show series but a car leaking fuel wasn’t going to make it. Cham returned the rental and exchanged it for another car. Ironically, or maybe it was destiny, the car had been driven only once. It had a Florida license plate and based in Tampa, our destination.

I couldn’t think of anyone else to share this patriotic road trip with. Cham and I really didn’t know each other when we hopped in that car and headed south but by the end of the trip, she’s become one of my most cherished friends and I can always hear her distinctive laugh when I think of her.