Stalking Elvis in the Pacific Northwest

Spotting Elvis in the Southeastern United States is understandable. Graceland is located in the heart of the South (Memphis). Up the road from me in Sarasota is the Waffle Stop diner (660 North Washington Blvd.; Tel: 941-952-0555) which claims Elvis ate there in 1956. Spotting a shrine to Elvis and other Elvis memorabilia in the Pacific Northwest during my recent trip seemed, well. Odd.

First up was the 24-Hour Church of Elvis in Portland, Ore.

“Do you know where the shrine to Elvis is?” I asked the P.F. Chang’s bartender.

No, that wasn’t it. That relocated out of the city earlier in the year. (Thanks to Roadside America, I knew Velveteria, the Museum of Velvet Paintings had closed and is moving to California).

Set my iPhone GPS on the address (408 NW Couch St.) and wandered a few blocks to find a tripped-out ATM. Was this it? Yup. The 24-Hour Church of Elvis. It’s basically a coin-operated pop-art gallery offering four options including answering Elvis trivia, getting married by the voice behind the screen and watching the Barbie dolls bicycle on their exercise bikes.

Im so upset my Flip video was out of juice meaning I didn’t capture any video of the experience but did grab some snapshots. Or had a higher power sucked out the energy from my camera for its own use? Hmm…

And, I’m sure it was more entertaining after the bottle of wine enjoyed during lunch than if we hadn’t indulged in adult beverages. It was also fun seeing the reactions of people walking by. They seemed as tickled by the artful ATM as we were. 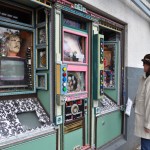 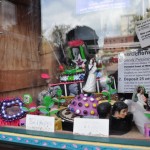 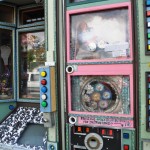 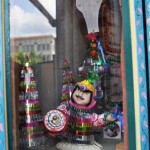 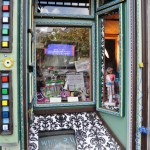 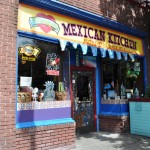 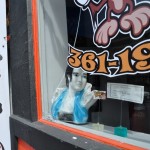 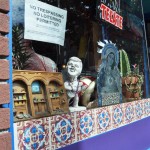 The next Elvis sighting was in the town of Raymond, Wash., along Hwy. 101 as we drove along the coast to Forks (Twilight country!). All sorts of metal animals and people dot the road through the town and I swear I saw an image of Elvis among those metal sculptures. (Or maybe I didn’t see Elvis but had him on my mind.)

Victoria, B.C., I spotted an Elvis bust in the tattoo parlor, Tattoo Zoo (1215 Wharf St.; Tel: 250-361-1952). Not sure what the connection was to Elvis and the parlor or Elvis and Victoria. Perhaps there wasn’t any other than the quirkiness of an Elvis bust.

There’s some sort of Elvis connection in Seattle’s Mama’s Mexican Kitchen (2234 2nd Ave.; Tel: 206-728-6262), which we found while wandering the streets. There in the window was a cute little Elvis!

Perhaps this was a lesson that the King of Rock ‘n’ Roll is everywhere and still loved and admired by the people.