This Ain’t Your Momma’s PB&J 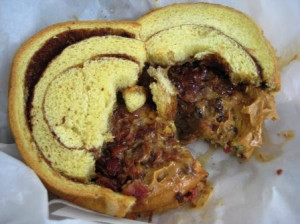 DTW’s PB&J’s: Not Your Momma’s Sandwich

Traveling through Detroit Metro Airport last week I needed some grub to fill my tummy for lunch. Having three hours to kill between connections, I utilized my time by wandering the terminal in search of the perfect lunch and found it at PB&J  serving gourmet peanut butter and jelly sandwiches.

While the classic peanut butter and jelly sandwich – just like mom used to make – is on the menu (along with peanut butter served with old school favorites such as banana or honey) I went for the offbeat choice – peanut butter, honey and bacon smacked between cinnamon swirl bread.

Did I just hear someone mutter “yuck” out there in the blogosphere? The combination did sound a bit bizarre but we all know, the cured meat is infusing mainstream food. Bacon ice cream is popping up across the country, there’s Bakon Vodka who want to drink the savory flavor of the meat without the greasy fat and Oxford Falls has a Bloody Mary Mix called Bacon Cheeseburger which promises a sassy bite.

Bacon seems to be the “in” food right now and being the trendsetter I am, had to try the peanut butter, honey and bacon sandwich. Peanut butter choices are smooth, chunky and cashew butter and went with smooth after asking the cashier which was the best. Crumbled bacon is sprinkled atop the honey and the two slabs of cinnamon swirl are smacked together. It was wrapped in parchment-like paper and handed to me in a paper bag (just like when I packed a PB&J for school).

The verdict? Pretty good. Not the most spectacular thing I’ve eaten but a nice combination of salty, savory flavors accented with the slight sweetness from honey and the cinnamon swirl bread. It was a bit messy and found myself licking my fingers after every other bite. It’s something I’ll try to recreate at home but will probably use bacon strips rather than crumbling it.

Find PB&J near gates A1 – A6 at Detroit Metro Airport. Most sandwiches with two items (i.e.: peanut butter and jelly) run $3.99, add another item and it’s $4.49. Top it off with a slice of bacon for an additional 65 cents. The peanut butter, honey and bacon sandwich atop cinnamon swirl bread costs $4.99.