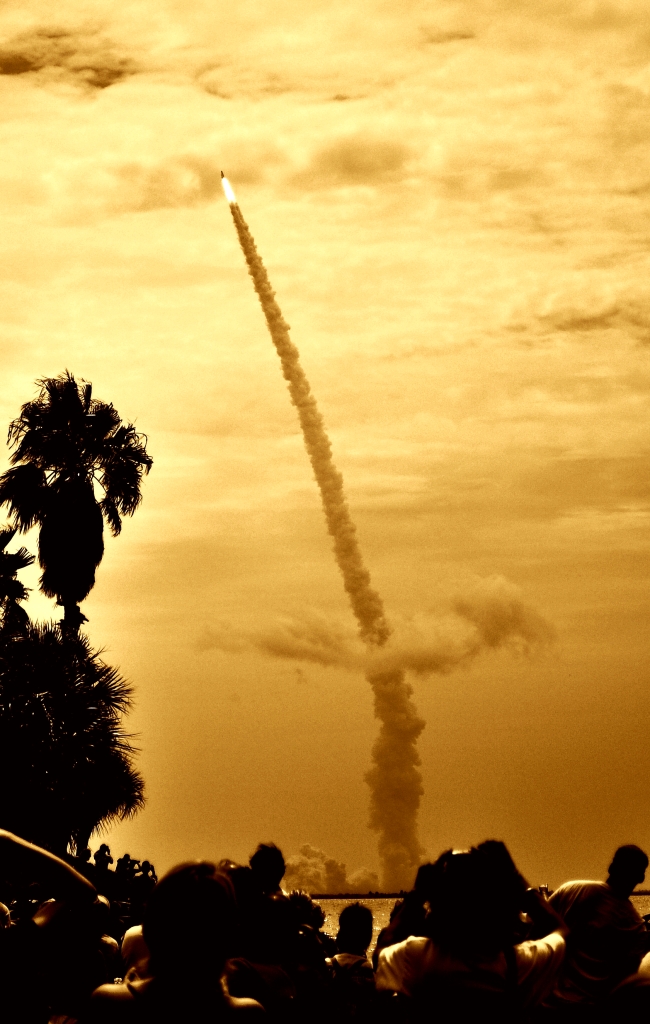 Space shuttle Atlantis launched for a final time on July 8, 2011, from Florida’s Space Coast and in all my smelly, sticky and sunburn glory, I was there to witness the space shuttle program’s final chapter.

Surprisingly, my rollaboard suitcase was quite comfortable when used as a pillow in the backseat of my Saturn Aura Thursday night. My car was parked in the Wells Fargo parking lot next to Space View Park in Titusville, Fla. I arrived around 9:30 p.m. for the 11:36 a.m. space shuttle Atlantis launch the next day. After circling to find a somewhat close place to park, I bit the bullet and shelled out $30 for premium parking.

I rationed I would’ve spent a heck of a lot more on a hotel room on the eve of the space shuttle program’s final launch. That’s if I could have found a room. When I was in Florida’s Space Coast last weekend, the hotel I stayed told me they did have rooms but with a requirement of a four-night minimum.

Sleepless in a Saturn

I didn’t get much sleep that night for a medley of reasons:to one side were two recreational vehicles with generators running all night, while the other three sides of me were surrounded by cars that decided to sleep with their windows closed.

That’s all fine and good but July in Florida is hot which meant they were getting pretty hot and sticky inside their vehicles. Engines turned on about every hour and ran for several minutes to cool the vehicles down. I opted to partially roll down all four of my windows and open the sunroof while rolling the dice it wouldn’t rain anymore and no one would reach their hands in the car to get in.

I checked my Twitter feed every time I awoke, searching for launch updates. At bedtime there was a 30 percent chance for a launch which meant the Atlantis launch had a 70 percent chance of being scrubbed due to weather issues. NASA officials indicated a go for lift off but I was cautiously optimistic.

About 4 a.m. I decided to begin my day by rolling out of my car and stretching my aching legs. I stood in line for the restroom at Space View Park which grew in population since my last visit around 11 the night prior.

Sweating all night and without access to proper bathing facilities, I freshened up and made myself somewhat presentable the best I could. I changed into my NASA t-shirt and skort and that’s it (read into what you’d like).

Around 6:15 a.m. I made my way to the little bit of land next to the parking lot away from Space View Park. I suppose it could be called land but it seemed more like a marsh. It was against the water, had tall, thick grass and damp.

I attempted to catch sunrise but with all the cloud cover, it was a dud. Slowly, people made their way over and I began making friends.

As the morning progressed, more people were gathering for this historic moment. I wandered up the A. Max Brewer Memorial Pkwy. around 9 a.m. and parking lots were reaching capacity, t-shirt vendors were plentiful and space shuttle enthusiasts were staking their claim to witness history. Suppose it was around 10 a.m. when I returned to my vantage point to find more space shuttle fans but plenty of room to share my chairs with my new friends and spread out my tarp and blanket for me. My tripod was set with my boss’s video camera and mine. Around 11 a.m. anxiety was building. “Is it still on? Will it be scrubbed?”

Again, I was cautiously optimistic. It was difficult connecting to Twitter and kept receiving a message about NASA TV application not available on my iPhone. Thankfully someone in the crowd had gone old school and brought along a radio.

As time marched to lift off, I felt like a giddy kid wanting to bounce up and down and scream.

“Seriously? Is this really happening? Will I get to see the last space shuttle launch ever today???” These thoughts swirled in my mind as I waited and waited.

Radio guy yelled out “one minute” and there were cheers.

We counted down “3…2…1” then seeing the yellowish glow, yelled and cheered at the top of our lungs. Smelly, Sticky and Sunburn But Oh, So Worth It

Just like Endeavour’s launch I couldn’t believe what I was seeing. There Atlantis was, racing toward the ceiling of clouds on its final mission to the International Space Station. The sound delay was longer than viewing it in the press site during NASA Tweetup and not as loud but still noticeable.

Physically, I felt miserable. I hadn’t had a shower in 36-some-hours, had been sweating since the day before thanks to the Florida summer. I felt sticky and slimy and knew I was smelly. (Thank goodness for the sulfur smell in the viewing site!) I also forgot to lather up with sunscreen and even though the morning was primarily covered in clouds, I ended up sunburned.

Emotionally, I was on cloud nine. Drunk happiness filled every cell of my body having just seen an incredible accomplishment of mankind and witness four more people heading into space. All I could do was scream “woo-hoo!,” smile and cry happy tears. 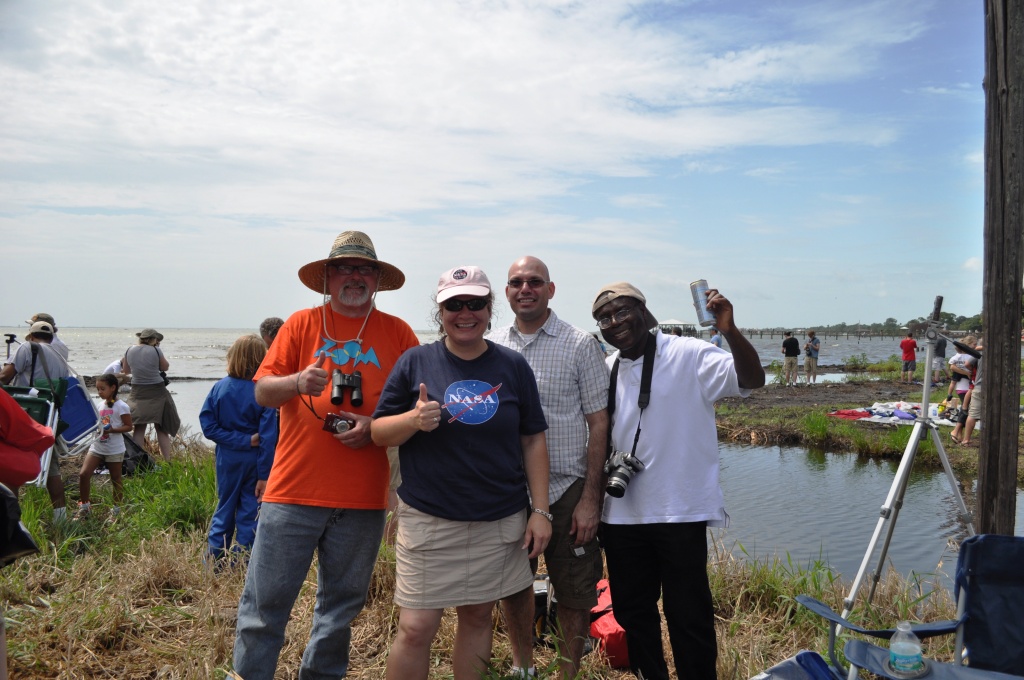 Me with Three New Friends I Met and Shared the Historic Day of Watching the Final Space Shuttle Launch, Titusville, Fla., July 8, 2011

I shared this historic event with three people I met that morning. None of them knew each other and for each it was the first time (and last) seeing a space shuttle launch. NASA has brought good people into my life with both this Atlantis launch and the STS-134 NASA Tweetup. For this, I’m blessed and humbled.

I regret not being more persistent in witnessing space shuttle launches from Florida’s Space Coast. I wish I took advantage of sick days in order to see more launches over the past decade. If I met so many incredible people with two launches imagine how many more I could have met at other launches?