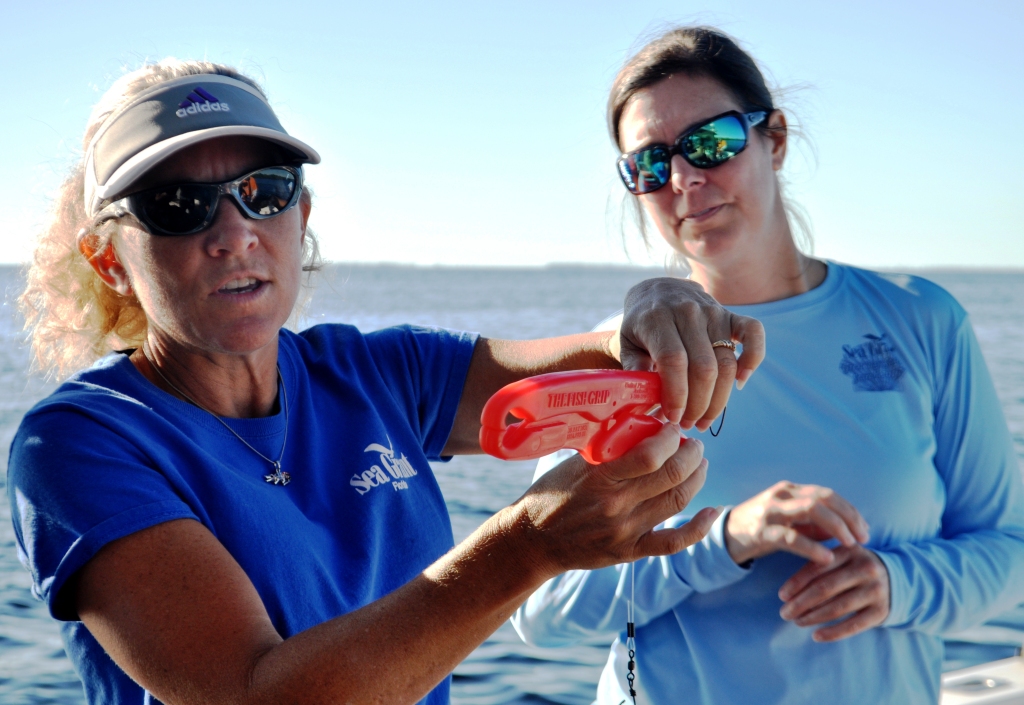 “No one likes to see floaters,” Joy Hazell, Florida Sea Grant Extension Agent said as we were anchored in Charlotte Harbor netting bait fish. Our final destination that morning was the Gulf of Mexico.

In my quest to learn more about my surrounding environment, I found myself on an offshore (aka: deep sea) fishing trip in the Gulf of Mexico last month. It took me 6.5 years of living near Charlotte Harbor to finally do this.

Florida Sea Grant, through a grant from West Marine, arranged the outing to tell members of the local media about barotrauma and show them ways certain species of deep water fish experiencing it can be returned to the water through descending devices. Capt. Ralph Allen with King Fisher Fleet in Punta Gorda, Fla., a well-respected and accomplished angler, was our fishing guide. He didn’t disappoint because within seconds of dropping lines in the water we were reeling in red grouper. 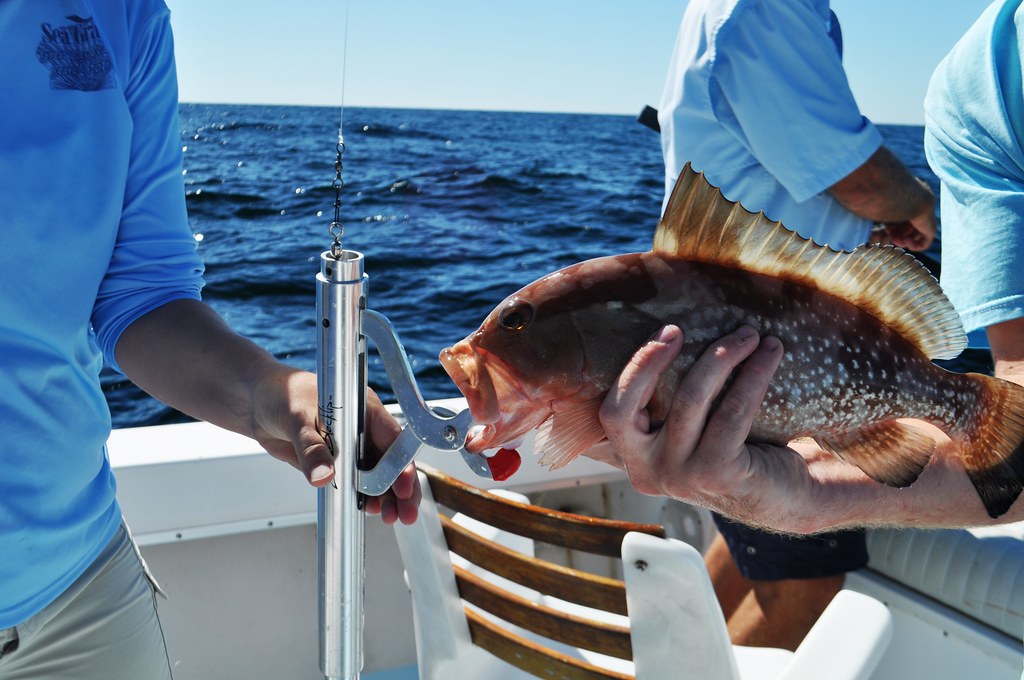 A Red Grouper Being Fitted with a Descending Device, Demonstrated by Florida Sea Grant.

What is Barotrauma?
Now, if all you non-anglers haven’t already stopped and Googled what the heck “barotrauma” is, let me explain. It’s caused when bringing a fish to surface too quickly. It’s characterized with bulging eyes, a protruding stomach, and/or distended intestines. It’s caused when the fish’s swim bladder (which controls buoyancy) ruptures and releases gas into its body cavity. This prevents them from swimming back down.

Other than the obvious inability to return to its original depth, floating fish are exposed to the sun and predators which most likely results in mortality. 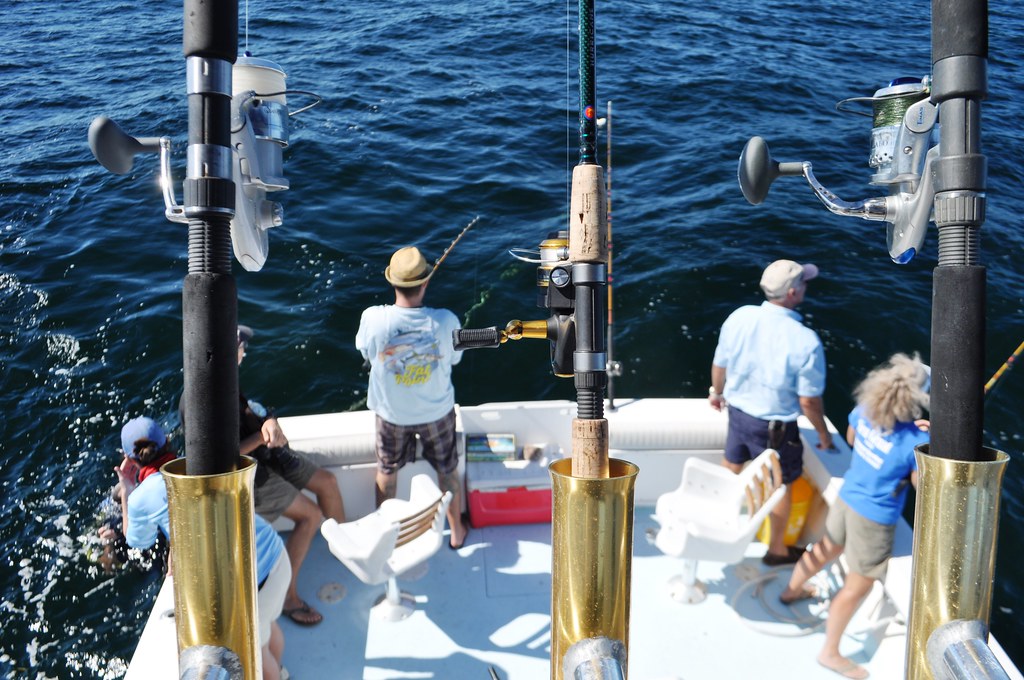 A Day with Florida Sea Grant and King Fisher Fleet – Learning About Barotrauma on Fish and Descending Equipment, Oct. 17, 2014

The floaters Joy was referring are dead fish caused by barotrauma. Ever try to push an inflated balloon or plastic ball down to the bottom of a swimming pool? Pretty tough, right? That’s basically the impact of barotrauma.

Although venting is appropriate studies have indicated some fish species respond better to venting while others respond to descending techniques. Since the fish’s body is pierced with venting, this could invite infection and some anglers could do it incorrectly which may cause damage and mortality to the fish. 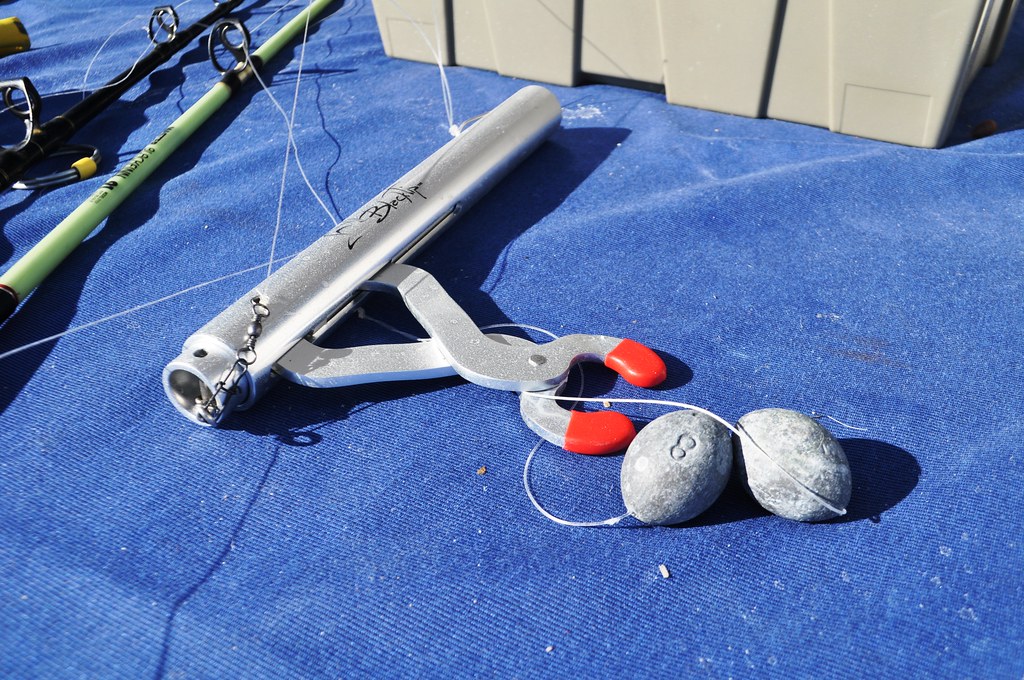 Using Descending Devices
In recent years, various descending devices and techniques have been introduced to return fish with signs of barotrauma back to the water. Florida Sea Grant demonstrated some of these devices and as I learned, it takes some practice to make it happen properly and quickly. 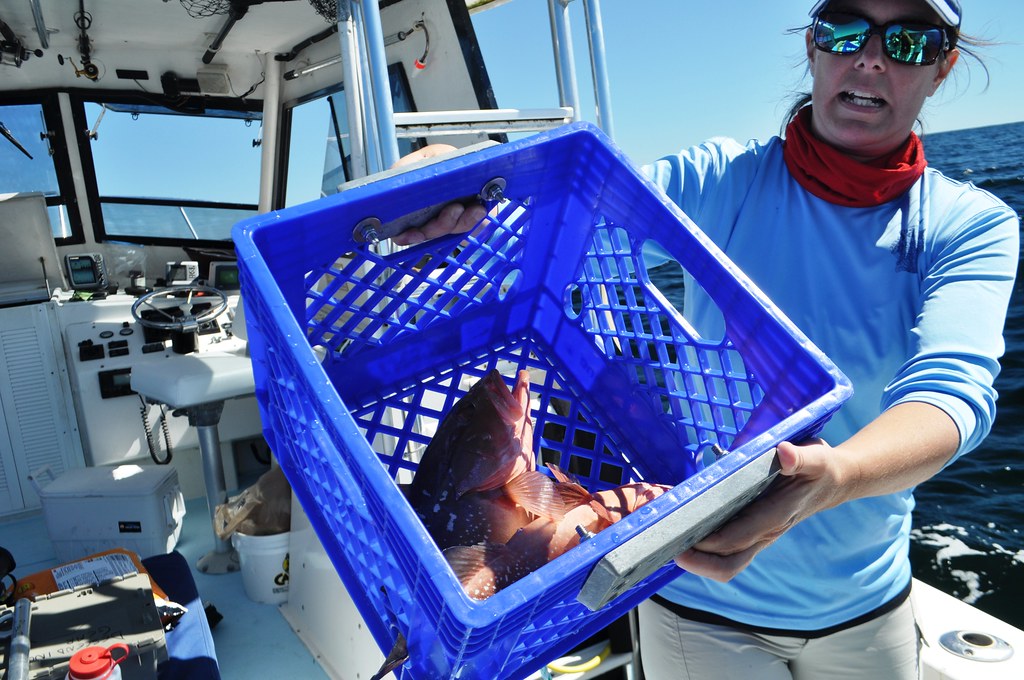 Florida Sea Grant Extension Agent Joy Hazell Demonstrates How a Weighted Milk Crate Can Be Used as a Descending Device to Return Red Grouper to the Water.

Descending devices include a pressurized release tool, S-shaped wire hook clip and weighted spring release tool. Most of the devices included a lip grip which is attached to the fish’s lower lip. With a 2 lb weight attached to the line, the fish is lowered into the water. Some descending devices can be set to release the fish when a certain depth is reached. Others are more manual and are released by giving it a tug. 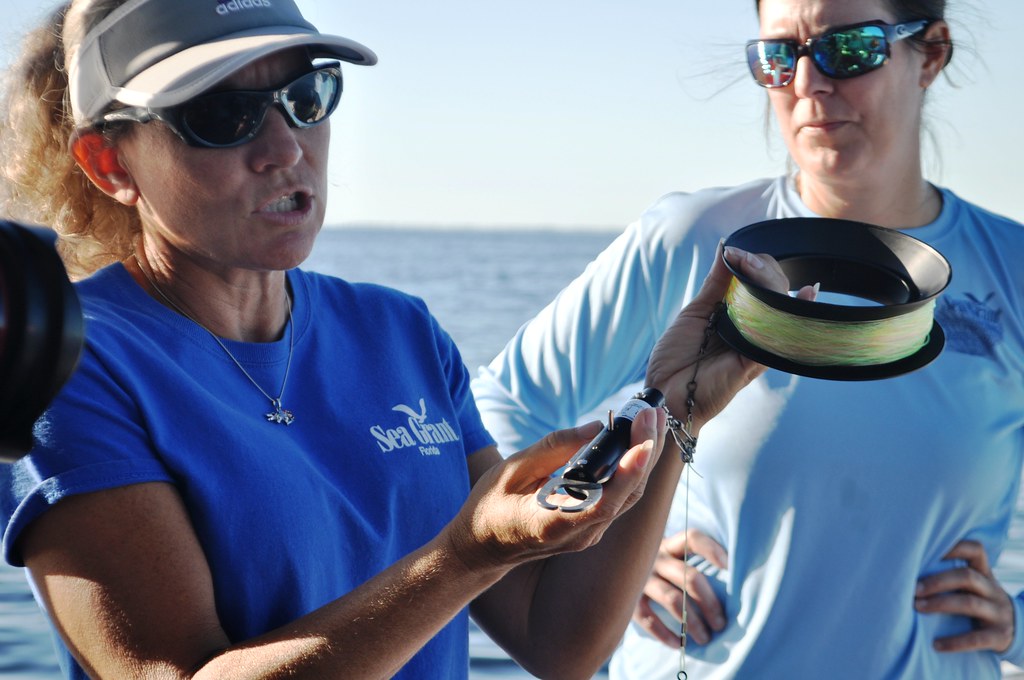 Another piece of equipment seemed somewhat simple – it was a weighted milk crate. Fish are placed inside, it’s lowered in the water and fish swim out.

I’ve always said a healthy environment yields a healthy economy. When the fishery is preserved and bountiful, in this case Charlotte Harbor, more anglers will be attracted to visit and fish the destination. This leads to a healthy economic impact on the community.

Descending gear is currently not required however, anglers are encouraged to do the right thing to help preserve the fishery.

“Use any device that will increase survival,” said Betty Staugler, Florida Sea Grant Extension Agent, “Anglers should use something.”
Responsible offshore fishing. I highly recommend it. Visit catchandrelease.org for additional information. 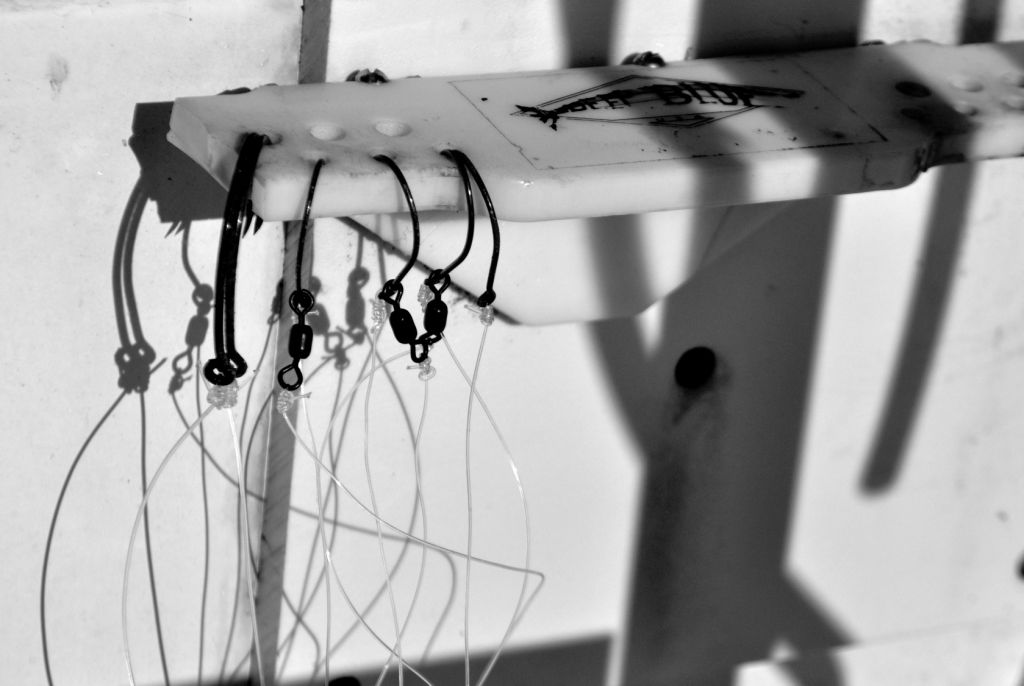 Sidebar: My Personal Chumming Contribution
Age does an interesting thing to the body because during this recent trip, I ended getting motion sickness. Not once but twice! I called it my personal chumming contribution. I’ve gotten sick only one other time before on a boat and that was when worked and lived in Everglades National Park so probably in the late ’90s. I took a group to Dry Tortugas National Park in 25 knott winds. Gave a whole new meaning to bagged lunch. I did find that although I hated it, standing up made me feel a little better. I was wearing sea bands and maybe the reduced how sick I got.