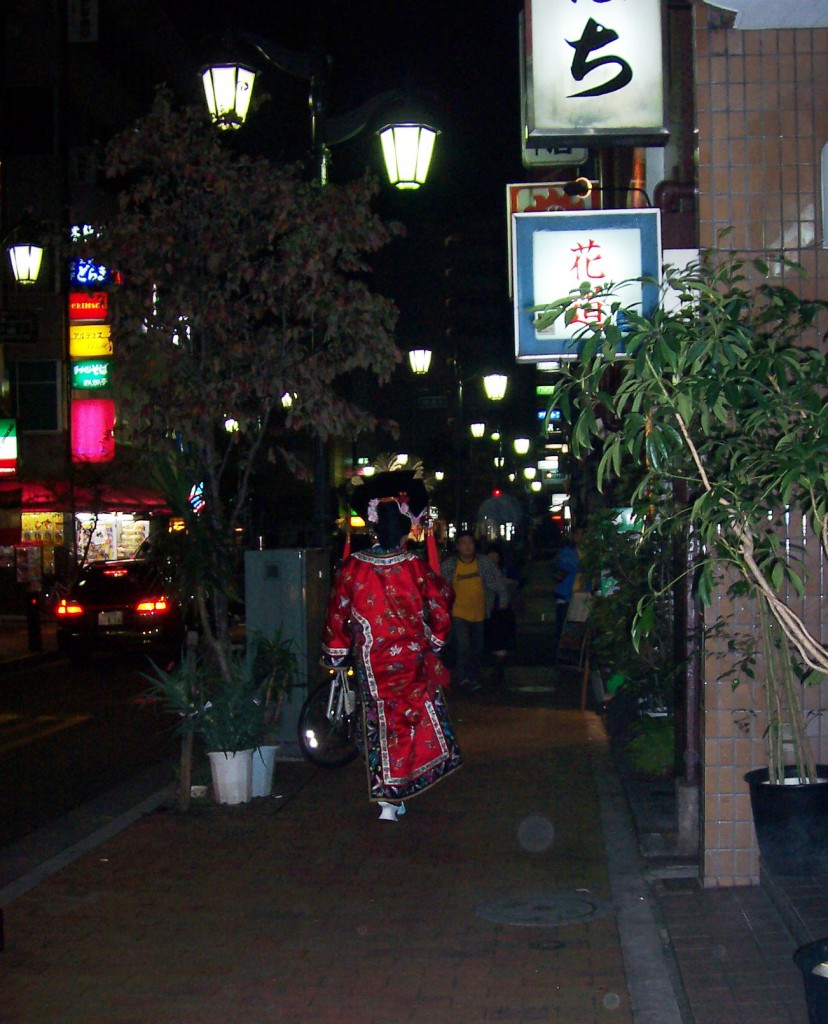 “Gay-dar” seems to work in every country. Using his to guide us through Tokyo’s streets, my traveling companion Matt led us to the center of the city’s small, yet lively gay quarter called Shinjuku-ni-chome, commonly referred to as Ni-chome. As if reaching a mountain summit and basking in his achievement, Matt placed his hands on his hips and confidently declared, “We’re here.”

We had spent the month in rural Japan and unsure of their reactions, we kept Matt’s sexuality hidden from our host families. Part of the reason for keeping it a secret was the host families set him up on several blind dates with young Japanese women. Being the good guest, Matt was always polite and gentlemanly to his dates. Since he already unwillingly experienced the Japanese heterosexual dating culture, we spent our last weekend in Tokyo so he could experience the Japanese gay culture. With the exception of Ni-chome, homosexuality seems to be hidden in Japan. 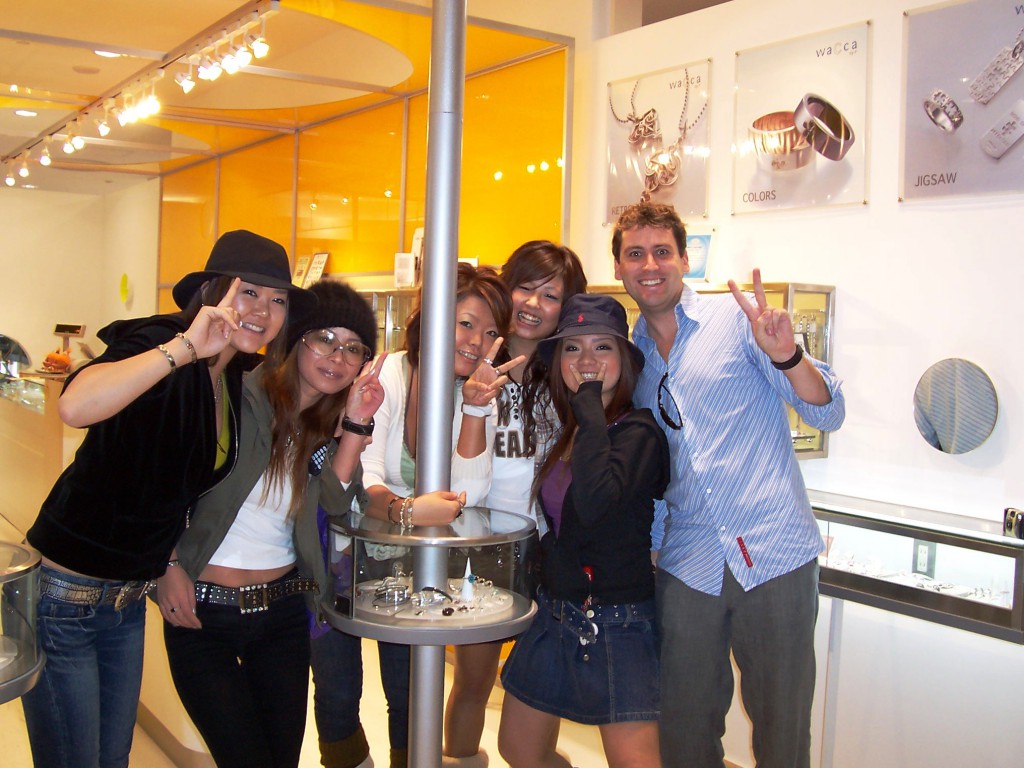 Matt was Popular with the Girls in Japan

We tasted Tokyo’s gay culture at Advocates Café, an open-air bar where Western and Asian men and women mingle and connect. Finding Nemo played on the television screen and the sound to the movie was drowned out by patrons engaged in conversation. We arrived in time for Happy Hour and for about $10 each we guzzled bottomless plastic cups of beer and compared notes about our Japanese experiences with Americans, Australians, Chinese and Japanese men and women.

The men were gay and women were straight. Interestingly, all the women seemed to make their sexual orientation clear in the first sentence of introduction. Most of the Westerners we met were living in Japan teaching English as a second language. The young Japanese men love Advocates because it’s an opportunity for them to practice their English with native speakers.

At least an hour had passed and the crowd at Advocates nearly tripled in size. It was time to move on and check out the rest of Tokyo’s gay scene. With Matt as the expedition guide, we wandered to a neighboring side street and passed a pudgy, drag-geisha dressed in a short, red silk dress. He hobbled along on wooden sandals and I couldn’t resist telling him he was “kawaii”—cute. He shyly giggled, hiding his smile behind his right hand, and continued on his way. 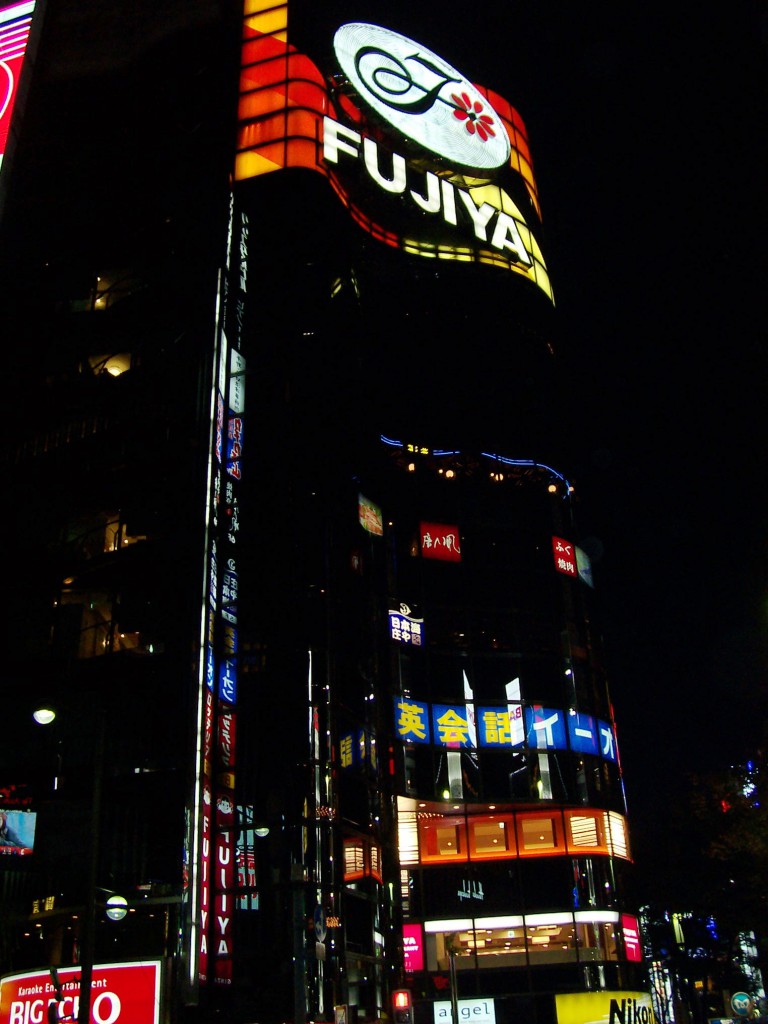 We decided to climb a narrow staircase where we had seen the drag-geisha exit. It led to a tiny, second-floor club. Matt opened the door to the dimly lit pub and the six Japanese men sitting at the bar turned their heads, cheered and clapped enthusiastically to his entrance. Peering my head around the corner, I was booed when they saw my face.

“Sorry, no girls,” the bartender said, as he made an “x” with both index fingers, signifying I had made a major faux pas. I learned first-hand that women are not permitted into many of Tokyo’s gay clubs and was told earlier in the evening very few clubs admit Westerners of either gender.

Lowering my head with embarrassment, we headed back toward Advocates to meet up with our new friends for another hour. Most trains stop running at midnight and at 11:30 p.m., masses of partygoers made their way to the train station. Matt and I crammed into a car and headed to our Tokyo hotel. I had heard these crowded cars are opportunities for drunk Japanese men to inappropriately fondle women. I didn’t have to worry about that. Matt on the other hand …

Advocates Cafe
The open-air café is open nightly and spills out into the streets during the weekends.  7th Tenka bld. 1F, 2-18-1 Shinjuku, Shinjuku-ku Tokyo. http://advocates-cafe.com

Finding Advocates Café
Train: The JR Shinjuku Station is Japan’s busiest station and serviced by about a dozen local lines and six railway companies.  If staying in Tokyo, take Yamanote Line to the Shinjuku Station.  Exit out the east doors onto Shinjuku Avenue.  Advocates Café is about a 10-minute walk.

This essay was based on a Fall 2004 trip and has been fact-checked. It was originally published in To Japan with Love: A Travel Guide for the Connoisseur (To Asia with Love)

If you’d like to donate to support Japan’s recovery, check out these reliable agencies.