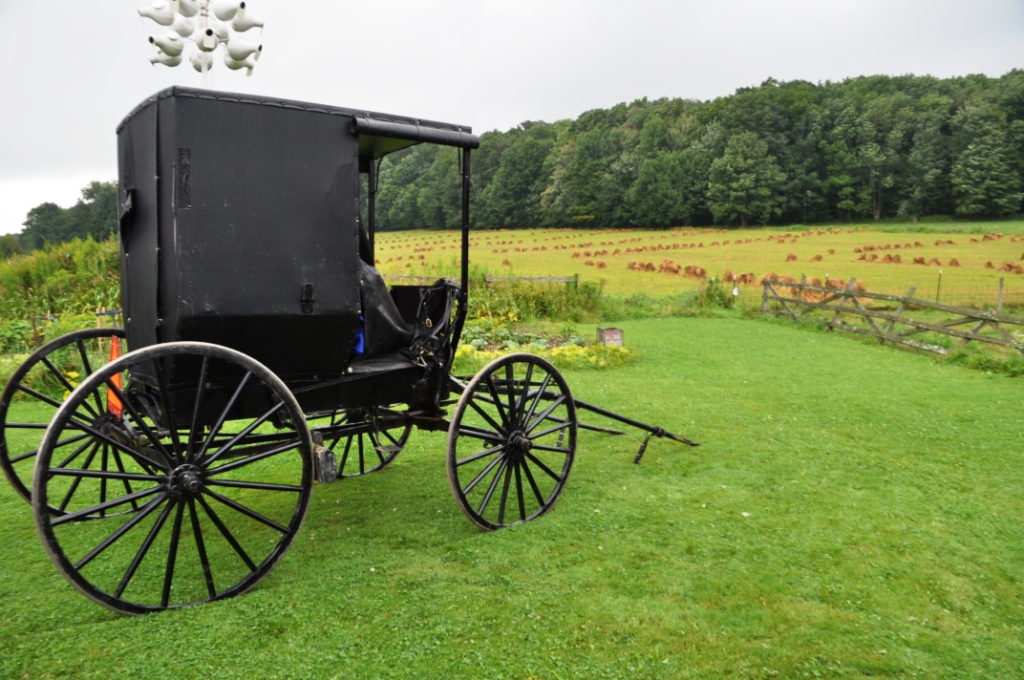 Somehow I mustered up the courage to speak to the man of mystery behind the counter. A thin, dark beard lined his jawbone from one ear to the other while the rest of his face was clean-shaven. I’m always tongue-tied around people like him. No, not celebrities, but members of the Amish.

My fascination with the Amish probably began before I was 5 years old when my family made road trips to visit friends in Titusville, located in Western Pennsylvania. The only two tourist activities in the area seemed to be Drake Well and driving country roads to see the Amish, either working on their farms or driving horse-drawn buggies. 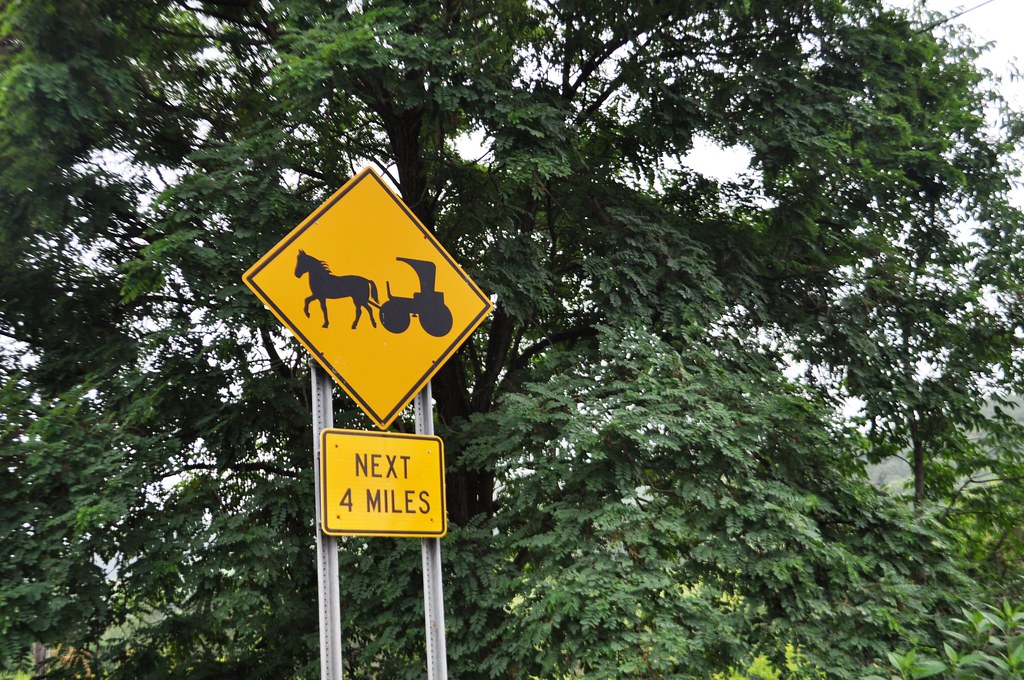 Watch for Horse-Drawn Buggies Along the Amish Trail

Some of the things I was told about the Amish were they don’t like having recognizable photographs taken, they can’t drive motorized vehicles, they don’t use zippers in their clothing, and they don’t have electricity in their homes. As time passed and I moved to Florida, I still had a curiosity for the Amish which was intensified several years ago after reading The Year of Living Biblically

by A.J. Jacobs, in which he spent some rare, one-on-one time with an Amish family. (By the way, it’s an awesome book and I highly recommend it, especially if you have a curiosity about the Bible’s Old Testament.)

There’s probably more I need to know about the Amish so please forgive my ignorance. 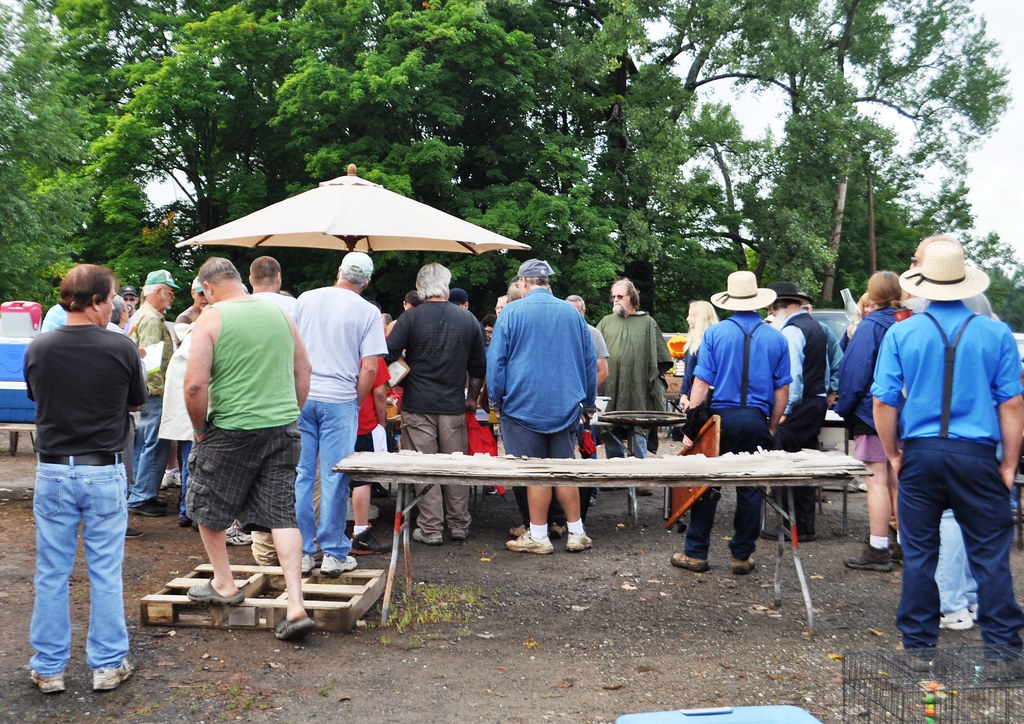 During my summer trip to Buffalo my parents and I set out on our next adventure, the Gentner Commission Market and Springville Auction in Springville, N.Y., located about a 45-minute drive south of Buffalo. Why?

In addition to it being a popular place to buy other people’s trash, it’s also where some Amish go to buy goods. I’m told during a typical auction day, held each Wednesday, stuff is auctioned off throughout the whole morning. Meanwhile, vendors are set up to sell their wares, trash/treasures, fresh produce and baked goods. 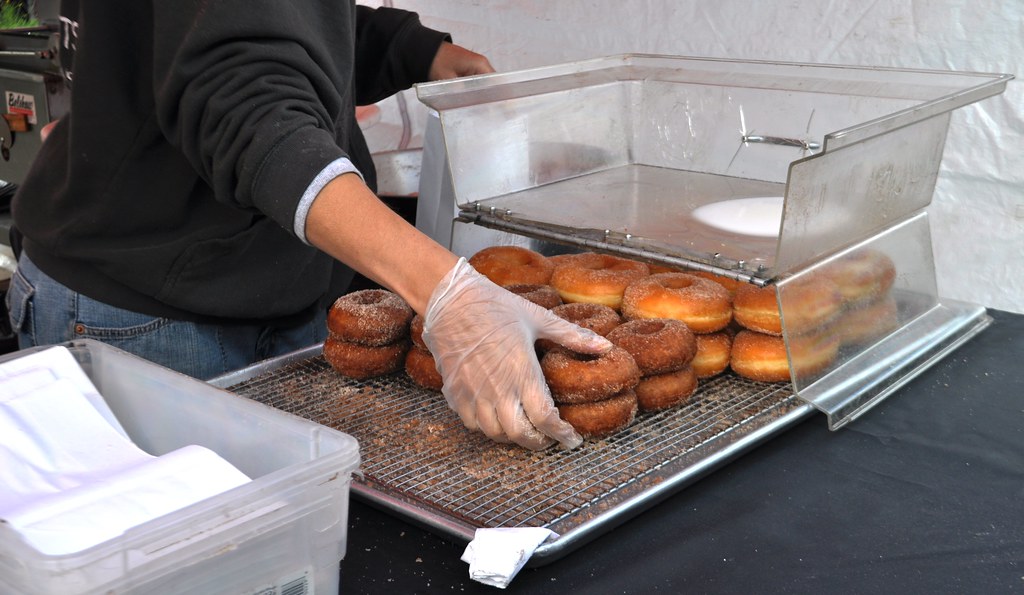 If you go, pick up an apple cider donut from Duke’s Donuts. They’re light yet slightly greasy, have a nice apple flavor and a little crunch from the sugar granules. Or/and, picked up some homemade baked goods, such as a whoopie pie, from the Amish stand. An animal auction is held in the afternoon. 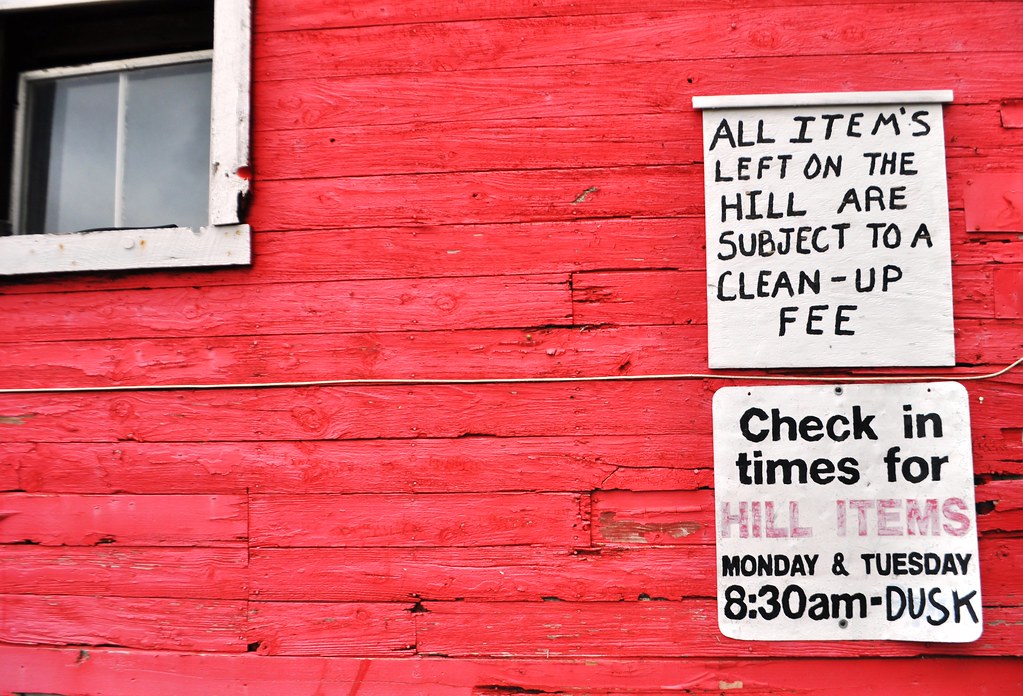 It rained during our trip to the auction which put a damper on attendance and the auction was shorter than a typical day. I spotted a few Amish buying produce, picking up odds and ends at the auction, and purchasing items from other vendors. I watched a young couple as they loaded a van with a full-length mirror and other wares.

“I’m going to be disappointed if he hops in the driver seat and drives away,” I said to my mom.

Despite seeing Amish, I didn’t see any black buggies or horses. Did they drive to the auction? I know they can have drivers and maybe this was the case but I had to turn away when the bearded man with a black hat, blue shirt and black pants got into the van. I didn’t want to taint my perception of them. 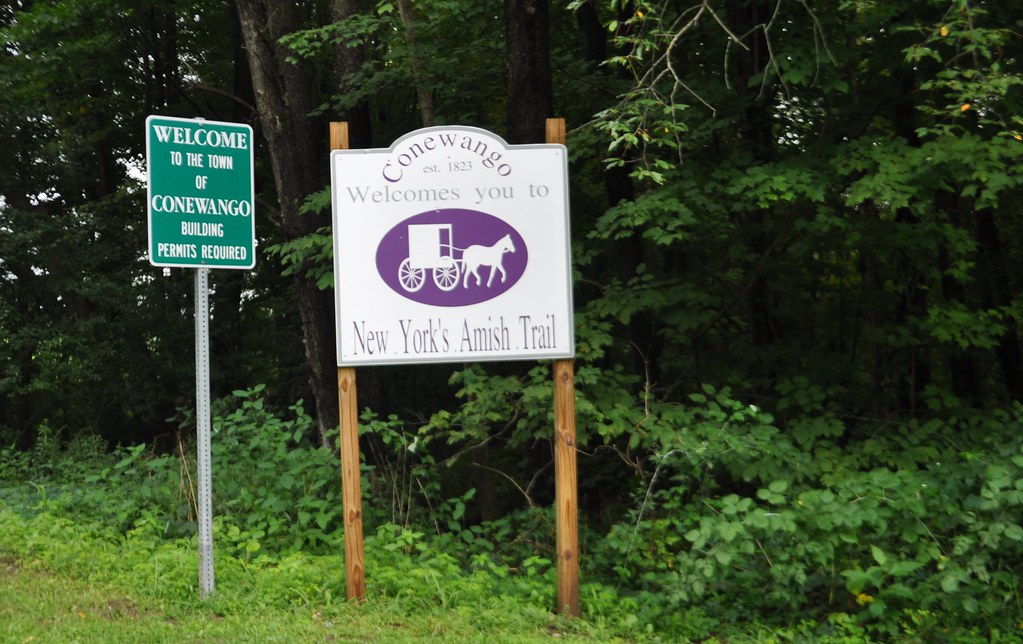 Yes, New York Has an Amish Trail
Rain cut our day short and thanks to the TripAdvisor app, I discovered New York’s Amish Trail with some of the trail located in Cattaraugus County. The website instructed us to pick up a trail map at a participating business, and although I really wanted us to head to the American Museum of Cutlery, my parents pulled into the Cattaraugus County building where I walked through a metal detector to pick up an Amish Trail map.

I’ll spare the details of our detours, but we finally found our way and did what the map recommended, ventured down side roads to enjoy the journey. The three stops we made were in the Conewango Valley and our first stop was an Amish shop specializing in lawn furniture. 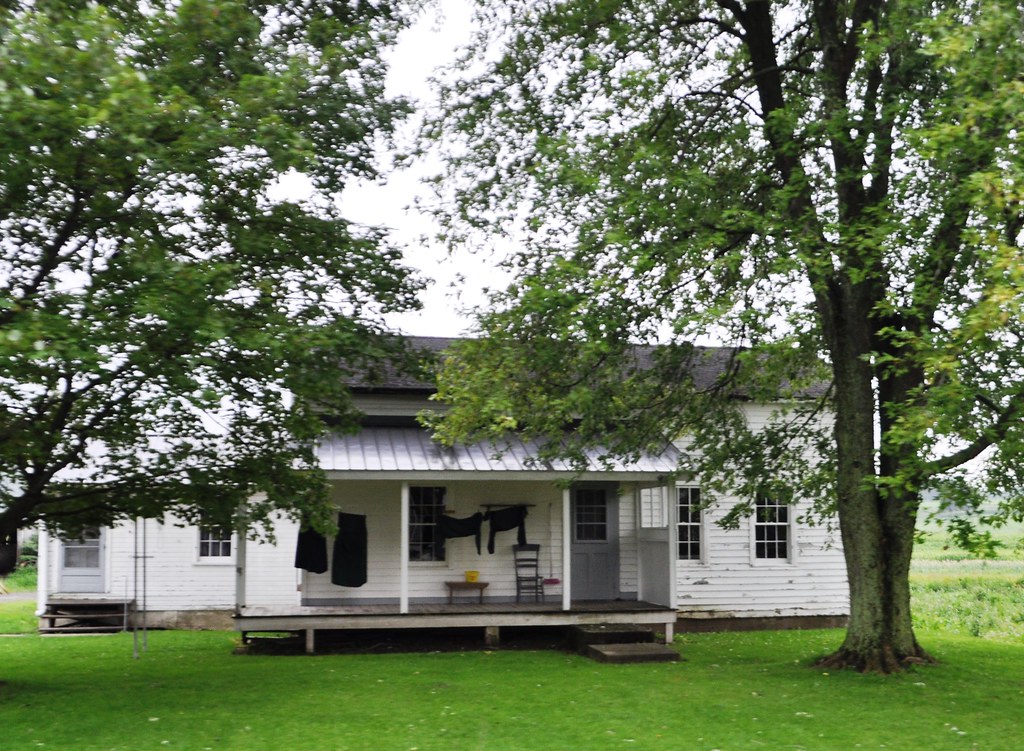 Standing on the front porch of a white house were three little boys with one holding a baby. The boys, all in bare feet, wore crisp, sky-blue shirts, black slacks with suspenders, wide-brimmed straw hats and rocked longer versions of Prince Valiant-style haircuts. Their cheeks rounded when they smiled and their big, round, brown eyes glistened with a mix of apprehension and curiosity when we, the “English” (non-Amish people), said “hello.” 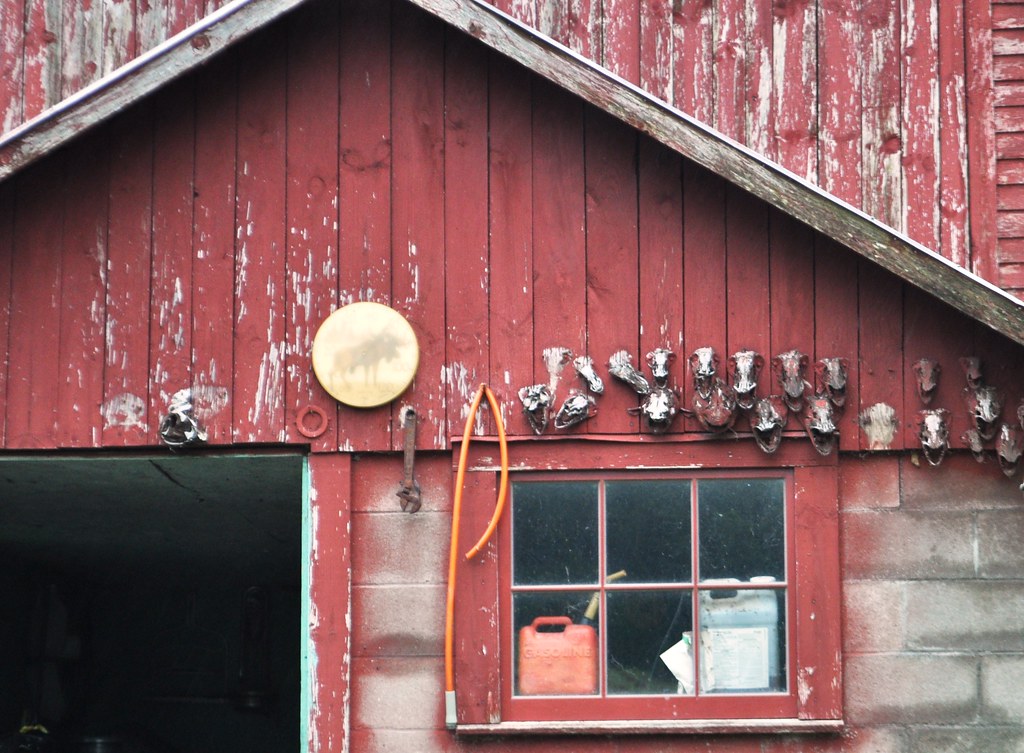 Plastic Furniture and Produce Delivery. Is This the New Amish?
We entered the red barn where I was expecting to see Amish men hard at work, cutting, sanding and bolting together wood furniture. Instead, I saw a room full of poly furniture and poly parts.

In other words, plastic furniture. The pieces arrived pre-cut and basically the Amish bolted the things together. Every piece of furniture in that room was made of plastic. The benches. The birdhouses. The picnic tables. Everything. Anyone who knows how to follow the instructions of “place A into slot B” could put this stuff together (which means every adult who’s stayed up late on Christmas Eve). Maybe the original designs are Amish but I’m guessing for half the price, I could find the same pieces at Wal-Mart.

My perception of the Amish had changed and continued to change.

Next to the cash register sat bags of chocolate covered cookies and baskets of peaches. A “fresh peaches” sign was staked in the front lawn. Now, seeing this, wouldn’t you assume these peaches were picked off an Amish orchard? Nope. The woman of the house, whom I purchased a potholder from, told us they were just delivered by the semi-truck parked out front. Plus, the peaches wore those little annoying labels, the ones that line the edge of my kitchen sink.

Was anything about the Amish what I expected? I mean, how did they place their orders for these items? Was it all by phone? (In which I believe they can use.) Or did trucks just stop by every week or so and ask what they need? 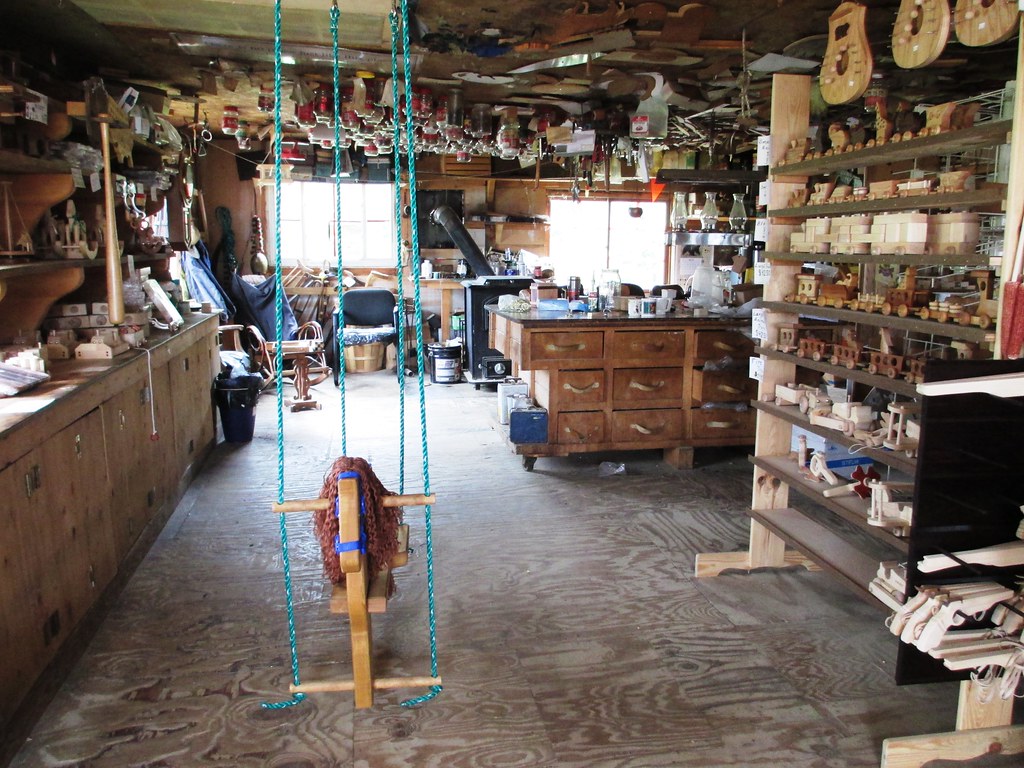 Inside an Amish Toy Shop on New York’s Amish Trail

The Amish Know Marketing
A few young boys and girls stood on the front porch of the two-story, white house at our next stop. They disappeared when we drove up their dirt driveway and parked in front of the red barn. Inside the barn was a toy shop with shelves and shelves of blonde-colored toys and other gadgets crafted from wood. Two teenage Amish boys were inside, playing with games and adjusting tools.

I’m an introvert and speaking to strangers makes me nervous, yet I force myself to do it because it’s how I make a living. I’m constantly out of my comfort zone and remind myself if I don’t speak, I miss an opportunity not only for bragging rights but life in general. 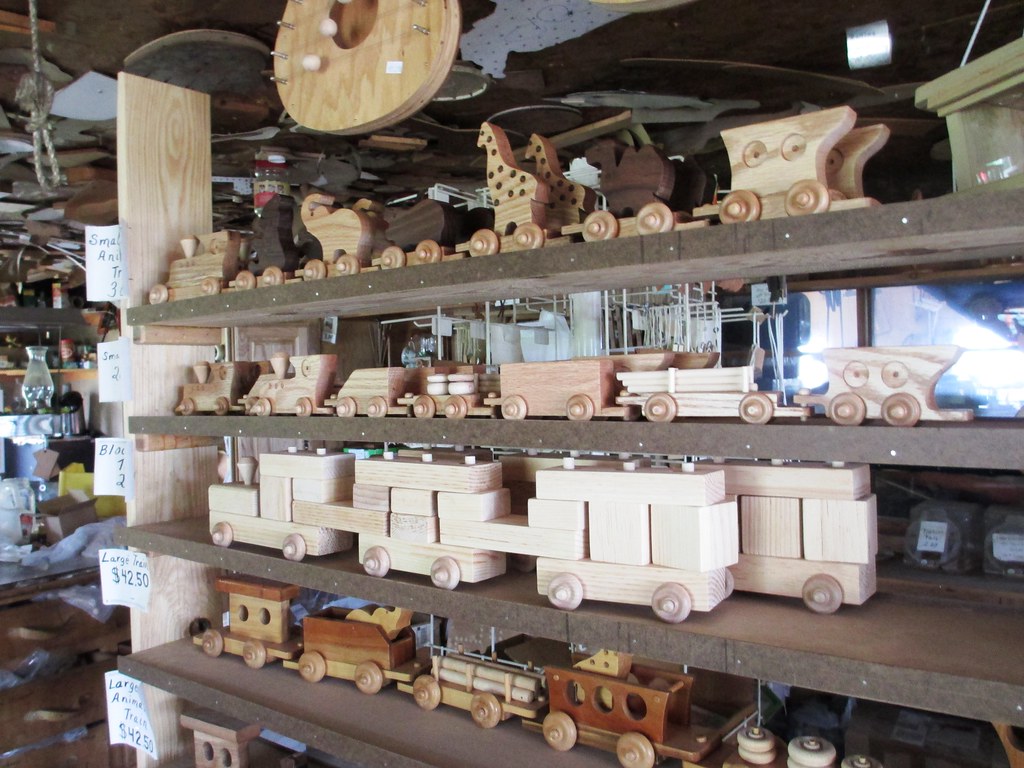 Inside an Amish Toy Shop on New York’s Amish Trail

Although I wanted to ask the bearded man behind the counter if there really is an Amish mafia, I kept it cool with the typical ice-breaking questions. To my surprise, he was quite chatty. Turns out, the shop was his father’s who had the afternoon off so he was tasked at watching the shop. We were told most everything was crafted either by his father or brothers. He ran the iron shop next door.

I should have picked up on this sooner and tip my hat to the Amish for doing it well. I learned on this journey that many are excellent marketers and I bought into it hook, line and sinker. While he chatted me up, he encouraged me to play a couple of games he had on the counter and I ended up buying one. Well, I was low on cash so my dad bought me one. I didn’t realize this until after the fact, but I’m guessing I could have negotiated the price. Plus, a tour guide we met on the way out asked if they gave us a good deal on the toys. Um, deal? 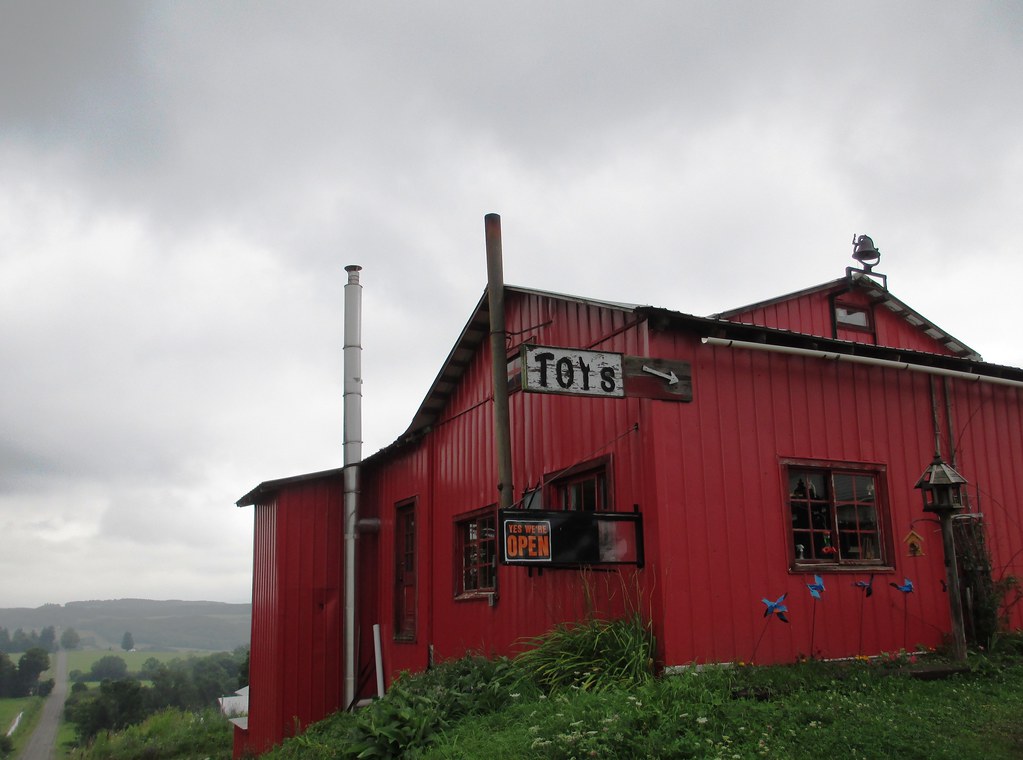 I was fine overpaying because after making conversation and purchasing the silly little game, it opened the door for me to ask to take photos inside the shop.

“You can take photos of anything in here, just not of us,” he said.

It makes sense the Amish who interact and sell to the English are marketers because they need to make a living. I didn’t spend $10 on a silly box game because I have plans to wow my friends, I paid it because of the experience that man gave me.

He answered my questions, was personable and was engaging. Who wouldn’t want to buy something from him? 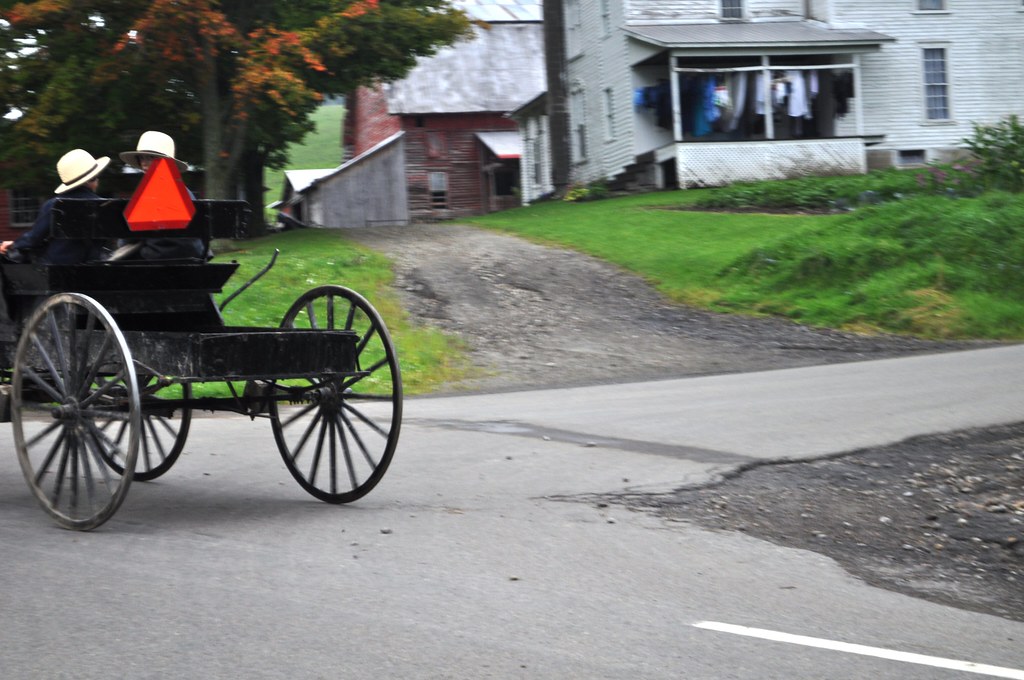 Our final stop was at a little white shed advertising sweet butter. The woman must have spotted us through the front window of her home because she rushed out and entered through the back of the shed. She was dressed in a navy blue dress with a white apron, white bonnet, black stockings and black shoes. We learned the butter came from the milk of their two cows. For $2.50 we left with a pound of farm-fresh butter and an experience couldn’t get at a grocery store.

We continued on our way over the hills admiring blooms of white, yellow and purple as well as beautiful farms. Later that day I posted a photo of an Amish buggy on my Facebook page asking friends where they thought I had been. Interestingly, most thought I was in Pennsylvania. Nope. New York has a rich Amish trail making it worth the trip. 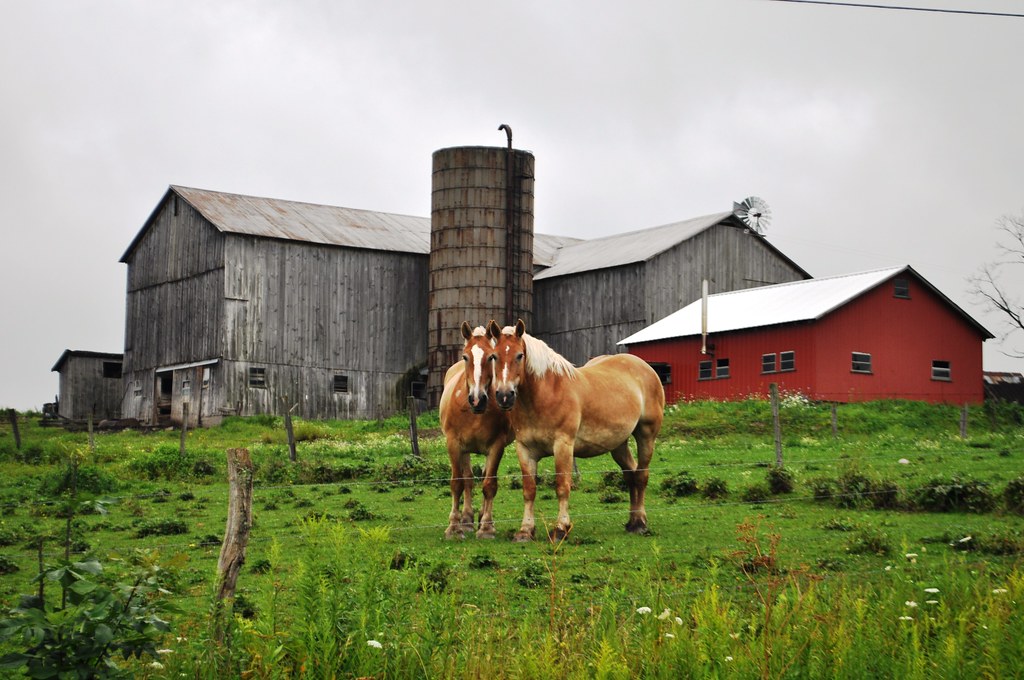 If You Go
It’s pretty easy to follow the map through New York’s Amish country. Businesses are listed along the way (such as an alpaca farm) and although specific addresses for the Amish businesses aren’t listed, the map guides you to their general location and you’ll see hand-painted signs directing you. Tour guides are available to guide you along the Amish Trail and I’m told the fee is $40 for a two-hour tour. Geocaches are along the trail for geocaching enthusiasts. Visit www.amishtrail.com for additional information including how to book a guide.