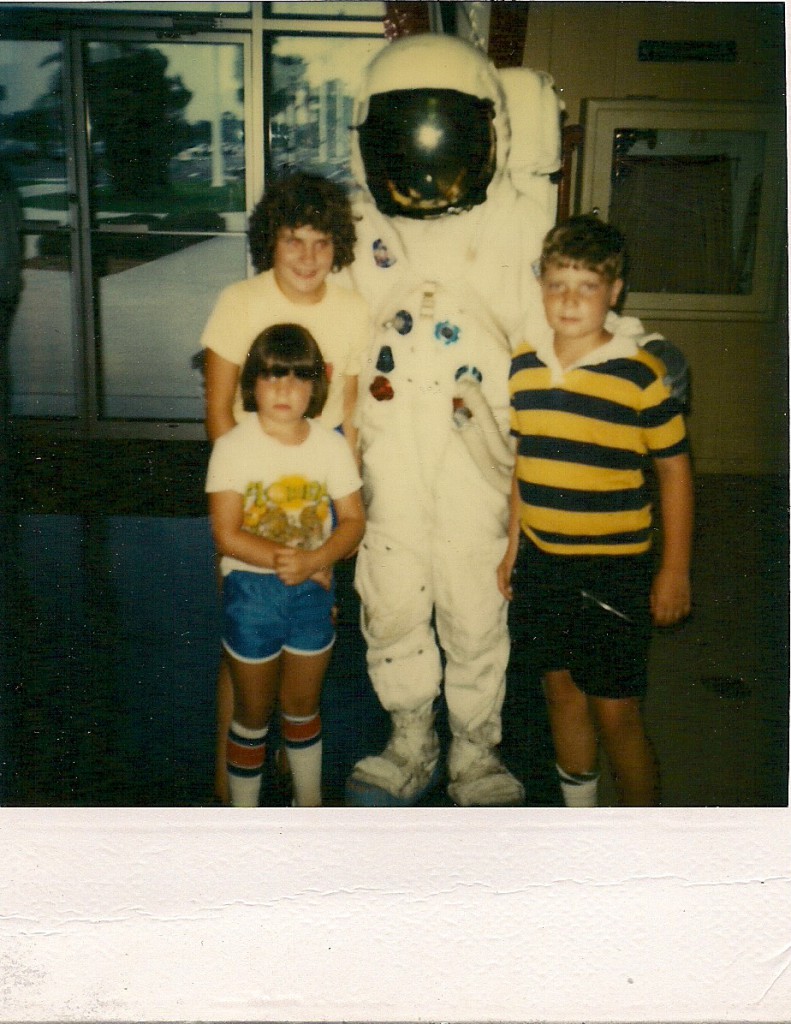 Me with My Younger Siblings, NASA's Kennedy Space Center, July 1981

Oh, my. It’s been a fast-paced week and I haven’t shared all the news. There was the B-25 flight and a chance encounter with author Stephen King but the most exciting news was received last Friday afternoon.

Around 4:30, I received notification from NASA I had been moved off the wait list to attend the NASA Tweetup scheduled around the last launch of Space Shuttle Endeavour on April 19, 2011 (STS-134). (Although, the launch date will not be official until after the Flight Readiness Review, scheduled for April 8.)

Being a NASA Tweetup attendee means for two days (April 18 and 19) I will be interacting with NASA shuttle technicians, engineers, astronauts and managers as well as tour the Kennedy Space Center, view the shuttle launch on April 19 from the media area (about 3 miles away) and maybe more! LeVar Burton (Roots, Star Trek: Next Generation) and Seth Green (Robot Chicken, Austin Powers) have tweeted they’re attending, too.

I don’t have full media credentials but will experience more than the average visitor.

Can you say WOW!?

I mean seriously, this is a big personal WOW! Out of more than 4,100 who applied to attend, I’m one of 150 selected by lottery to Tweet, blog and document the event.

I’ve had about a week to come off my cloud and let the experience sink it. It’s amazing how this group of about 150 (I’m not sure if all 150 spots have been filled) has come together to build a community online. I don’t mean build an online community but everyone has had a part in preparing for the upcoming experience by sharing their expertise for the good of the whole.

For instance, I offered to write a press release template (which I hope to get uploaded Friday afternoon) Tweeps could use to pitch their local media. Others took more productive leads, such as Mike Yarbrough who has headed the housing committee. Dr. Heather Good created the Facebook page the group is using to communicate and Vincent Thome has designed a groovy T-shirt to commemorate the gathering. Chris Cardinal launched the blog 134 Tweetup: A Chronicle of the Tweetup of STS-134.

This is the tip of the iceberg. Others have created maps, documents, databases, and house logos, all for the good of the cause. Everyone is bringing something to the Tweetup table. View the complete list of #NASATweetup attendees here.

Of course, there are the #NASATweetup alums eagerly sharing advice such as Danny Sussman and A Geek Mom, to name a few.

And bless the woman behind the NASA Tweetup account. Having planned events, I cannot imagine the attention to detail required for organizing this event with attendees from coming across the globe needing security clearance.

It’s amazing. I haven’t met any of these good folks in person but I already feel I’m part of a family. If great minds can successfully collaborate virtually just imagine what will happen when we come face to face. Can’t wait!

About the Photo (But I Can’t Explain the Socks)
One summer, my grandparents treated my siblings and me to a trip to NASA’s Kennedy Space Center. It was July 1981, soon after the first space shuttle launch. It was then I learned what a space shuttle was and after three decades, I have yet to see a space shuttle launch. And yeah, it’s a Polaroid. And yeah, I know I visited when some of the attendees weren’t even visions in their parents’ eyes. *sigh*

About STS-134
Endeavour is heading to the International Space Station and during the 14-day mission, will deliver the Alpha Magnetic Spectrometer and spare parts such as a high-pressure gas tank, spare parts for Dextre and micrometeoroid debris shields and two S-band communication antennas (yeah, I’m clueless how this will all be used but trust it’s pretty important). Endeavour’s journey marks the 36th mission to the International Space Station (Source: NASA , http://www.nasa.gov/mission_pages/shuttle/shuttlemissions/sts134/index.html)