How to Spend 24 Hours in Butler County, Ohio

Home » Featured » How to Spend 24 Hours in Butler County, Ohio

Is 24 hours in Butler County, Ohio, enough time to experience this charming destination? No, but it was all the time I had. The kaleidoscope of activities, food, and fun I experienced in those 24 hours left me wanting more.

As I’ve blogged before, while driving up to Western New York last summer, my dog Radcliff and I stopped off in Butler County to taste some of the world-famous Butler County Donut Trail. My schedule was tight but with assistance from the Butler County Visitors Bureau, just about every minute was packed with something groovy within 24 hours. It was enough of a sampling that I’d love to visit again and spend more time enjoying the towns of Fairfield and Hamilton. Here’s how I spent 24 hours in Butler County with my dog.

Checked in to Staybridge Suites Cincinnati North, which is dog friendly! Radcliff and I received a warm welcome, complete with treats and goodies. Since I had driven from Southwest Florida all night and day and spent the night napping in my car along the way, I needed a shower to wash away the travel grime and prepare me for the evening. (Staybridge Suites Cincinnati North, 8955 Lakota Drive West, West Chester, Ohio 45069; Tel: (513) 874-1900; www.ihg.com)

7 p.m. Kickin’ it Old-School for Dinner

Wait, did someone say golden onion rings and a root beer float? Radcliff and I hopped in the car for Jolly’s Drive-In, a nifty drive-in diner in Hamilton. I pulled into one of the slots and from the comfort of my car, pressed the button and ordered my meal. It was delivered to my car on a tray which was affixed to my driver car window. Jolly’s Drive-In has a great nostalgic, retro, 1940s vibe and is a memorable stop. Plus, the onion rings and burger were delish. And Radcliff enjoyed a bite of my burger, too.
(210 N Erie Hwy, Hamilton, Ohio 45011; Tel: (513) 894-7541; Jolly’s Drive-In website)

While Radcliff waited in the car – with the AC running – I met up with Mr. Jim Goodman, one of the owners of Municipal Brew Works to sip a beer and soak up the design and history of this stunning building. This riverside brewery oozes with character. Built in 1933, the Art Deco building is the former City of Hamilton municipal building and still belongs to the city.

Seriously, you want these walls to talk because at one point it was home to the fire department and firing range in the basement. The brewery opened in 2016 following a large-scale interior renovation to properly accommodate the brewing process. Its renovation sparked a bit of a renaissance downtown with other projects opening. Staple brews are offered throughout the year and special beers are brewed which give back to a specific organization. And, keep your eyes and ears open, local legend states the building is haunted with at least one spirit from its firefighting days.

Whoa! What a day! It was back to Staybridge Suites for a good night’s sleep because the next day, the early bird gets the delicious donuts!

Overall, Radcliff and I slept well at Staybridge Suites Cincinnati North which I was concerned because we were on the ground floor and next to the parking lot. I quickly grabbed some breakfast in the hotel lobby, loaded up the car, and Radcliff and I were on another adventure.

8 a.m. Rolling Along the Donut Trail

A dozen shops participate in the Butler County Donut Trail and some open as early as 4 a.m.! Many close early after selling out.

While Radcliff chilled in my air-conditioned GMC Terrain, I popped into Jungle Jim’s International Market in Fairfield. What. A. Trip!

I have never experienced anything like Jungle Jim’s. Outside was a faux monorail and dinosaur statues. Inside, wow! It’s a little overwhelming and on a whirlwind walk through, I saw huge masses of cheese, packages and packages of meat jerky, a portrait of Jungle Jim in Jelly Bellys, and the entryway into the restrooms was through the door of a porta-potty!

About every type of food you can imagine, from just about anywhere in the world, was in there. Like alligator, kangaroo, and ostrich. Browse more than 1,500 different labels of hot sauce, specialty soda, and endless jars of honey. There’s also a greenhouse and cooking classes are scheduled.
Jungle Jim’s International Market is quite something. I picked up some locally made dog biscuits for Radcliff. I’m sure you’ll find at least something to take home. (Jungle Jim’s International Market, 5440 Dixie Highway Fairfield, Ohio 45014; Tel: (513) 674-6000; junglejims.com)

Tour the super-duper grocery store with a tour guide or try their scavenger hunt to explore the store.

The food is delicious, but the owner and his family are the reason you should enjoy lunch or dinner at Namaste Curry House in Fairfield.

Dilli Acharya and his family spent 20 years in a refugee camp in Nepal. They found themselves there by way of India after fleeing their home in Bhutan during the king of Bhutan’s ethnic cleansing campaign of the late 1980s and early 1990s. The United States welcomed the family as part of a resettlement program of Bhutanese refugees. They first went to Chicago and eventually to Fairfield.

In 2017, the amazing restaurant opened and has been receiving excellent reviews ever since. I enjoyed a delicious lunch of Tandoori chicken which was perfectly flavored and tender. (Namaste Curry House, 6679 Dixie Hwy, Fairfield, Ohio 45014; Tel: (513) 870-0067; namastecurryhouse.net)

1:45 p.m. Perfect Afternoon for a Walk in the Park

Radcliff and I decided to stretch our legs with a walk through Forest Run MetroPark in Hamilton. We ambled along the paved trails through the lush greenery and the rain chased us back into the car. (Forest Run MetroPark
1810 New London Rd, Hamilton, OH 45013; www.yourmetroparks.net)

2:30 p.m. Driving through the Raindrops

Since the skies opened, Radcliff and I had to find something to do until the rain stopped for our final visit. I spent the time driving through downtown Hamilton and admiring the murals and adorable shops. The mural program is a public art program called StreetSpark and is in partnership with the Fitton Center for Creative Arts, the City of Hamilton, and the Hamilton Community Foundation. More than a dozen colorful murals representing the area’s history are found throughout downtown. Which, it’s probably a good thing it was raining because it prevented me from spending too much money.

Pyramid Hill Sculpture Park & Museum is a stunning collection of more than 60 larger-than-life sculptures peppered over 300 acres of rolling hills and meadows. Some of these grand pieces of art overlook ponds.

Explore by foot, car, or rent an art cart. Radcliff and I enjoyed wandering up to some of the sculptures which ranged from abstract to whimsical and intriguing to inspiring. Yes, Pyramid Hill Sculpture Park & Museum is dog-friendly, as long as canines are kept on a leash and be sure to pick up after your pet. (Pyramid Hill Sculpture Park & Museum, 1763 Hamilton Cleves Rd, Hamilton, Ohio 45013; Tel: (513) 868-8336; www.pyramidhill.org)

I really hated leaving but I wanted to arrive at my parents’ house by midnight. Radcliff and I said our goodbyes to Butler County and with donuts to fuel the drive, we hit the road and continued our adventure.

Getting to Butler County, Ohio

Getting to Butler County, Ohio, is easy. By car, it’s about a 20-minute drive west of I-75. If you’re not up for driving Cincinnati Airport is about a 40-minute drive from Hamilton. Plan your visit and learn more about this fantastic getaway at www.GetToTheBC.com and follow #GettoTheBC and #OhioFindItHere on social media. 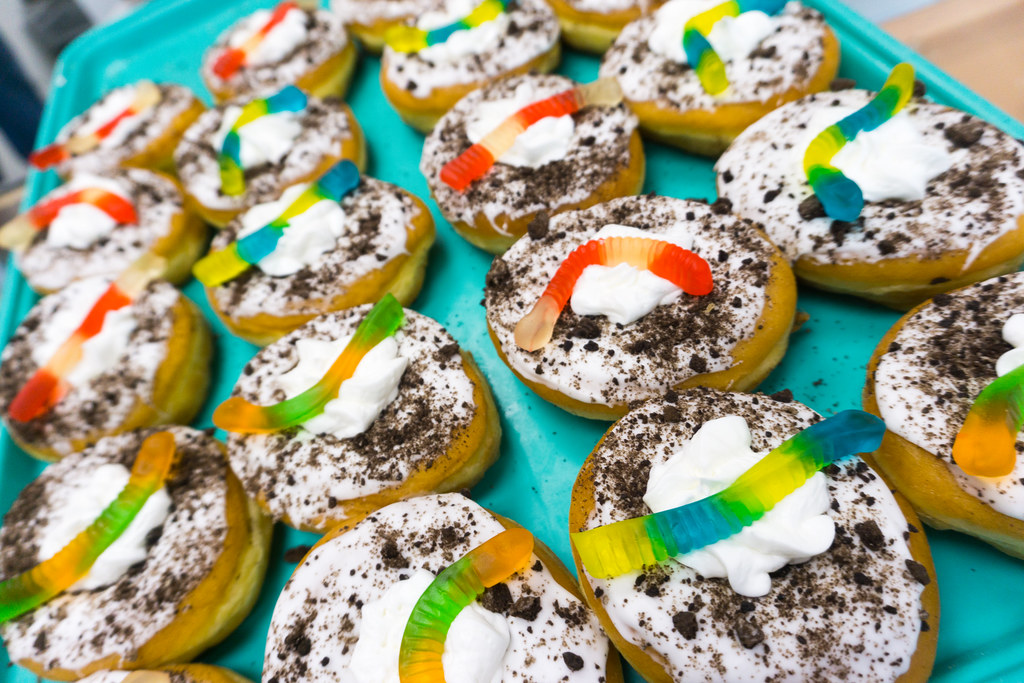 I was a guest of the Butler County Visitors Bureau and all opinions are my own.