Girls’ Night Out at Libby’s Cafe in Sarasota, Fla. 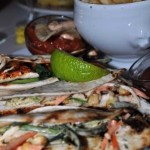 Libby’s Cafe & Bar in Sarasota, Fla., was the perfect place to enjoy a girls’ night out with my Mom and Aunt S. who were visiting from out of town.

Champagne at dinner. Perhaps I’m a little jaded but I don’t need a special occasion to drink a little bubbly when going out to dinner – life’s too short to wait for special occasions. Last month we toasted “just because” during a dinner at Libby’s ( 1917 South Osprey Ave; Tel: 941-487-7300).

New to Sarasota’s restaurant scene in 2008, Libby’s is garnering culinary attention with accolades including Open Table’s Diner’s Choice for 2010, Florida Trend magazine named the eatery as the best newcomer for 2009, and received 2009 Reader’s Choice Awards from Creative Loafing, Sarasota Magazine and SRQ magazine.

Libby’s Cafe & Bar: All About Atmosphere
With an eclectic mix of entrees including pot pie, Kobe beef meatloaf topped with a fried egg, and fish tacos, I knew this was my kind of restaurant. Plus, Libby’s has a nice, casual sophistication atmosphere with clean, simple decor of white table cloths, dark wood and colorful and funky lighting fixtures. The dining area opens onto the sidewalk. (For those familiar with Sarasota, this was the location of Fred’s restaurant .) Perhaps Libby’s decor and attitude is reflected in the uniforms worn by wait staff: crisp, white button-down shirts; blue jeans; black tennis shoes (think they were all Converse) and black aprons. 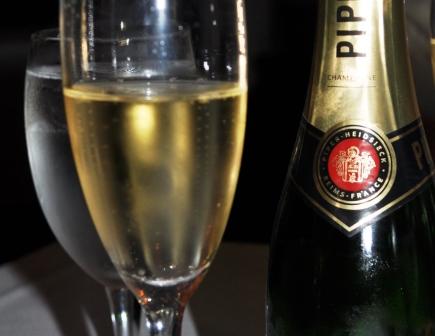 Dinner began with a champagne toast and ended with a dreamy and smooth chocolate mousse topped with fresh berries. In between was delicious heaven. Dried berries were baked into dinner rolls adding texture and sparking conversation. They were served with a dish of fresh butter, crisp olive oil, tangy vinegar, roasted garlic and black olives.

Libby’s Cafe & Bar: Little Bit ‘O Heaven
I’m a fish taco gal and enjoyed the 7-Day Famous Mahi Tacos ($19). Three soft tortillas overflowed with blackened fish; an Aztec slaw which included shredded carrots and zucchini; chipotle sour cream; avocado; and Pico di Gallo accompanied by crisp and thin french fries. Although this entree was more than enough (one taco and fries ended up going home with me), a side order of Gorgonzola Mashed Cauliflower called my name and yes, it was incredibly delish. It had the thick consistency of mashed potatoes and the perfect amount of Gorgonzola twang to complement the earthy taste of cauliflower.

Mom and Aunt S. were satisfied with their dinners. Mom considered the Maine Lobster Mac ‘N Cheese ($30) but our server convinced her to order one of the specials, which she enjoyed. It had crab, lobster in a cheese sauce over a puff pastry. Aunt S. enjoyed the Twin Jumbo Lump Crabcakes ($27 large, $12 small).

Reservations for the night were booked via the Open Table iPhone App – so easy! Libby’s Cafe & Bar is youthful, sophisticated and yet, casual. The downside was the subdued lighting – it was a bit dark reading the menu (it’s true what they say about aging eyes!). As the night progressed and the dining crowd grew, the louder the dining area became making it difficult to have conversation. Other than that, Libby’s has Solo Travel Girl’s stamp of approval. 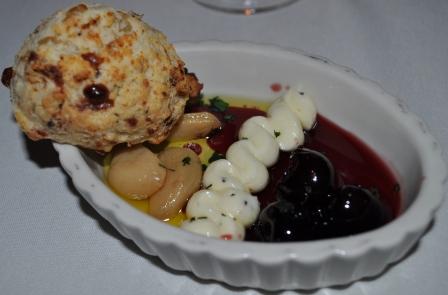 Bits & Stuff to Know About Libby’s Cafe & Bar
Libby’s serves lunch Monday through Saturday and dinner daily. Early bird value dinners are served 4 to 6 p.m. The restaurant is a member of the Sarasota-Manatee Originals, a group of independent restaurateurs devoted to preserving the area’s culinary well-being. The restaurant will join other Sarasota and Manatee County eateries during Savor Sarasota Restaurant Week, June 1 – 14, 2010.

Thursday is Gal’s Night Out
During the 2010 season, between 8 and 11 p.m., women are treated to $2 wine or champagne by the glass or the ultimate girlie drink, Cosmos. Valid throughout the Bar and restaurant.

Things To Do
Sarasota