Dining at Queen of Sheba in Washington, D.C.

More than two years ago I met a kind gentleman on a flight between Atlanta and Tallahassee. We began talking, I asked if he had a tattoo because he was from Portland, Ore., and of the other things I remembered about our 36-minute flight was his culinary recommendation: Ethiopian. He had been a missionary in Ethiopia for 20 years and he told me Ethiopian cuisine was the most delicious cuisine he has eaten. He boasted about the flavors and variety.

Ever since, each time I’ve traveled to a big city I’ve been on the lookout for an Ethiopian restaurant keeping him in mind. While in Washington, D.C., last weekend I met up with friends and joined them for a late dinner (because I had an earlier dinner alone plus I was lost heading to the Metro so dinner sounded fabulous) at Queen of Sheba Ethiopian Restaurant. My friends Tom and John found it on Yelp with reviews ranking it with four stars. 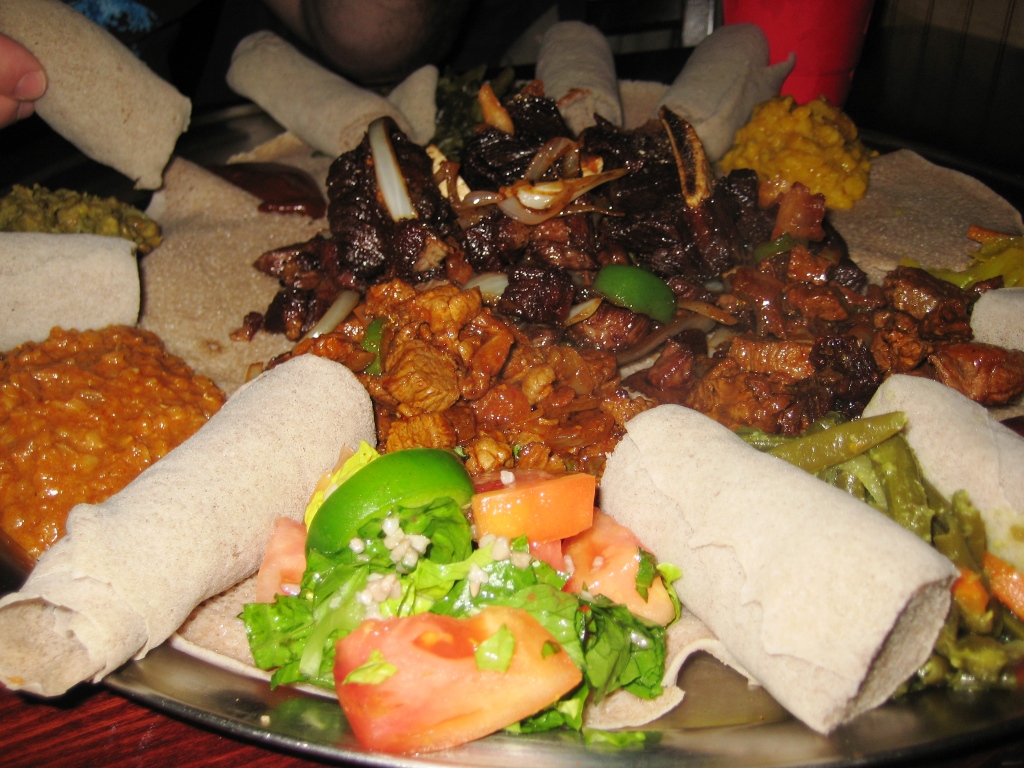 Sampler Platter Server Created for Us at Queen of Sheba Ethiopian Restaurant, Oct. 30, 2010

None of us had ever eaten Ethiopian food so we weren’t quite sure what to order. The menu was heavy on vegetarian dishes but with plenty of meat options. We decided to put our trust in our server and confessed it was our first time and asked her to put a platter together for us. While waiting for dinner we sipped on a lovely and sweet Ethiopian honey wine.

Pictured above is our Ethiopian dinner. I believe the meat was a mix of chicken and lamb complemented with an assortment of vegetable dishes. See the tan rolls? That’s the eating utensil – injera, Ethiopian flat bread. We weren’t given any utensils but I imagine they have them since Queen of Sheba also serves Italian and America fare as spaghetti and cheeseburgers.

I was eating light since I already had a lighter dinner earlier (that’s my excuse) and my friends did not clean the platter. When our server took away our three-quarter-eaten dinne, the expression of her face was, “There are starving children in Ethiopia!” Yes, there was some guilt in not finishing it all and hope someone else enjoyed the delicious meal.

We left just as entertainment was beginning to ramp up, which was around 10 p.m. on a Saturday.

If you don’t mind eating with your hands and seek adventure in your culinary experiences, give Queen of Sheba Ethiopian Restaurant a try when traveling to Washington, D.C. I’m not sure of the exact cost but I believe it was about $65 for the platter and 5 glasses of wine (which I’m assuming we were charged for a bottle). 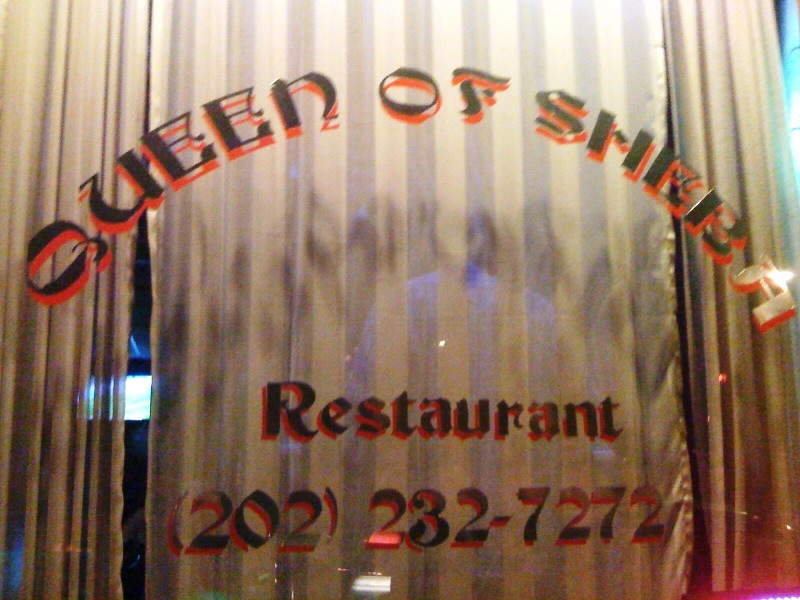 I originally blogged about my interaction with the missionary in Jan. 2008. When making sure links in my original post were accurate, sadly I discovered he passed away about a year ago. His name was Harold Kurtz and you can read about some of his accomplishments here. I admit to crying a bit after learning of his passing and am thankful our paths crossed during that 36-minute flight. Not because of his dining recommendation but for how much I learned from him in that short period of time.