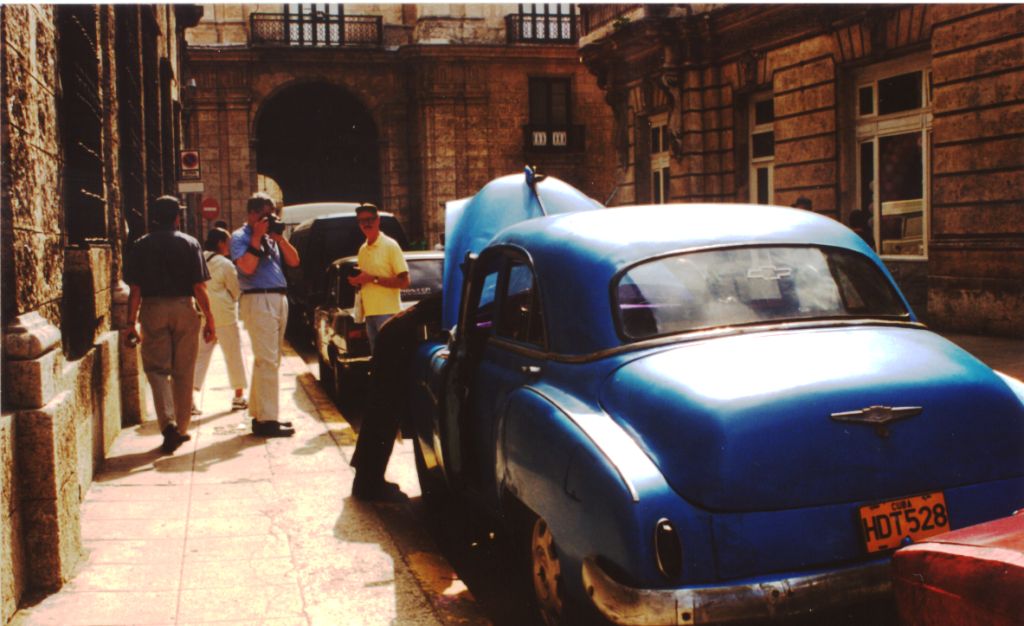 This post has been updated due to changes in policy regarding travel to Cuba. Check with the U.S. State Department regarding current regulations about U.S. citizens traveling to Cuba.

Have ya heard the news? Americans can now travel legally to Cuba on people-to-people programs with licensed operators. Although it was about eight years ago, I imagine the trip I experienced in December 2003 is similar to itineraries licensed operators will run to Cuba beginning in August. As a participant on a people-to-people program to Cuba with Insight Cuba, here are observations and thoughts on what I experienced:

Travel with a Large Group But Separated into Smaller Ones – I’m not sure if it was because I was participating on one of the final trips to Cuba but there were almost 100 people in my group and was further divided down into groups of between 12 and 15 for meetings and tours. During mealtime the big group came together and individuals compared notes from their day. 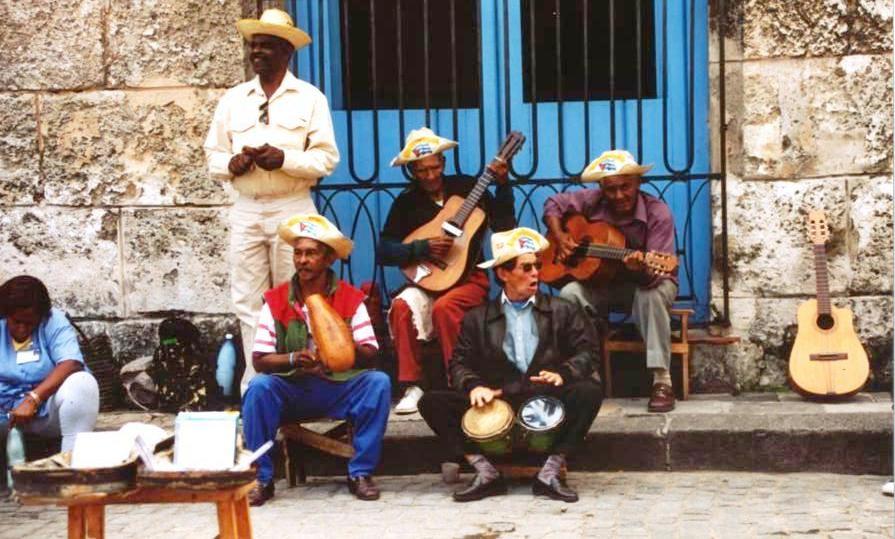 Friendly People Everywhere, Sometimes Too Friendly – As soon as I stepped foot into Havana’s Jose Marti International Airport, I felt the friendly warmth of the Cuban people beginning with the customs agents who welcomed me to Cuba with a broad grin. During the extended weekend, just about everyone I met was friendly and curious.

A couple of young men chatted me up on two separate occasions and after learning I lived in Florida, they proposed marriage to me.  One told me , “Everyone wants to go to Miami!”

These proposals weren’t asked because these men believed love at first sight, they were looking for an easy ticket out of Havana. I wondered about the welfare of one of the young men I met outside Museum of the Revolution because a gun-carrying military (or police?) officer told him to stop speaking to me and move along.

Although I met many friendly people, there were the aggressive panhandlers in Old Havana. Some were dressed as obnoxious tourists and others would walk alongside drawing quick profile sketches of group delegates then attempt to sell them for a buck. They didn’t ask to draw, they just did and seemed irritated when the subject didn’t purchase the one-minute portrait.

Structured Itinerary – It was quite obvious the itinerary was prepared by the Cuban government and we saw what they wanted us to see, except the very few times we had free time. It was emphasized we had to attend all parts of the itinerary or be sent back to the U.S. I’m not sure how that would have happened. As explained, this was not a recreational vacation but a cultural exchange. I recall the Bush administration saying there were too many mojitos and salsa dances during these cultural trips which was a reason for pulling the license.

The itinerary included meetings with a women’s abuse shelter, meeting with urban developers, witness a community beautification project and walking tour of Old Havana. I realized some activities were probably staged. We visited an art center where boys were drawing a still life. When I looked to see what they were working on, their pencils were brand new and freshly sharpened and they weren’t very far in their sketches. It was as though the scene was set in motion minutes before our ETA.

Bland Food, Dark Chicken Meat – The Cuban-based guide cautioned my culinary expectations by saying Cuban food is bland due to the lack of resources. By golly, she was right! The food served was probably the best available but served as nourishment rather than a culinary adventure. It also seemed each meal consisted of dark chicken meat. Was the white chicken meat served to individual restaurant patrons?

The best and most flavorful meal was enjoyed in a paladar. A paladar is a small, family-run restaurant with no more than 12 seats. It’s a (another) long story but it was not part of the group itinerary.

A Thriving Creative Class – Okay, I realize it’s ironic to use the term “class” to describe a segment of the population in a communist country but there are extremely talented people living in Cuba in both performance and visual arts. One of my favorite paintings picked up at a Havana flea market pokes fun at tourists at the city’s Malecón. It has a folk art feel and painted with vibrant colors. When visiting Havana, take time to enjoy the murals and street art. Musicians were pretty much everywhere in Old Havana and chances are some sort of performance will be included in an itinerary. 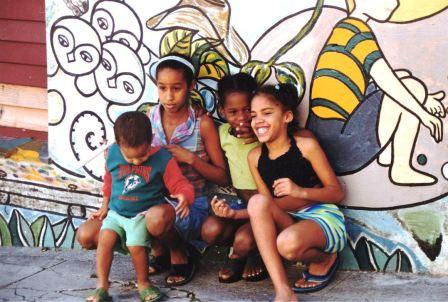 Know the Code – Guidebooks told me Cubans have their own nonverbal language and I saw it in action several times. For instance, when speaking of Fidel Castro, they would touch their chin with all five fingers mimicking a beard. There was another hand gesture of mimicking the beard, form a fist then pull down the imaginary beard in a zigzag pattern. Neighbors are suppose to spy on each other and I guess if nothing is said verbally, there’s nothing to report.

Visa (and MasterCard, American Express, Discover and JCB) Not Accepted Here – Yup, I don’t recall any businesses accepting American-issued credit cards while in Havana. I recall the hotel accepted traveler’s checks and at the time, the U.S. Dollar was a legal currency but I believe that’s changed. When traveling with a licensed operator, meals, activities and lodging should be included in the tour price but you’ll still need cash for gratuities (your hotel maid will probably craft masterpieces out of white terrycloth towels) and other expenses. There weren’t any ATMs and I doubt there are any today. Check with your group on the best way to handle this.

What Infrastructure? – A big part of traveling to Havana in 2003 was to see it before big box stores and chain restaurants take over. Havana was a step back in time before safety regulations and late-twentieth century technology. If Americans are free to travel to Cuba without restrictions, could the Caribbean country handle it? Probably not. The plumbing is old (be careful what you flush down there while at the same time, carry tissue with you), roadways are “rugged” and many buildings are crumbling.

Yes, There Were Mojitos But…

The trip and experience was incredible and I’m thankful Insight Cuba offered the program and am excited for travelers who’ll be joining them on future trips. Cuba libre, mojitos and other rum-based beverages were enjoyed. Salsas were danced. Cuban cigars were smoked. (Hey, it was Cuba!) My taste of the forbidden fruit was satisfied, somewhat.

The most memorable image I have from the trip is seeing an elderly gentleman sweeping the sidewalk with a broom made from palm fronds. He was thin, had sun wrinkled skin, grayish hair and was hunched over. His clothing seemed to hang off him as though they were two sizes too big and looking into his eyes I saw nothing. No sparkle. No hope.

I’m not sure why this vividly stands out. Perhaps it’s because the government was so busy trying to show us what they wanted us to see that they couldn’t hide the reality if I really looked for it.

Several companies have requested licensing and have received permission from the U.S. government to run people-to-people trips to Cuba. I traveled with Insight Cuba (www.insightcuba.com) which is offering tours in August. An organization I traveled to Afghanistan with also offers trips to Cuba. They’re called Global Exchange and they offer a host of Reality Tours to Cuba (www.globalexchange.org).

I’m hoping to return to Cuba to explore the country beyond Havana and hope it’s sooner than later.