Things to do in Gainesville: Visit the University of Florida Bat House and Barns!

Home » Featured » Things to do in Gainesville: Visit the University of Florida Bat House and Barns! 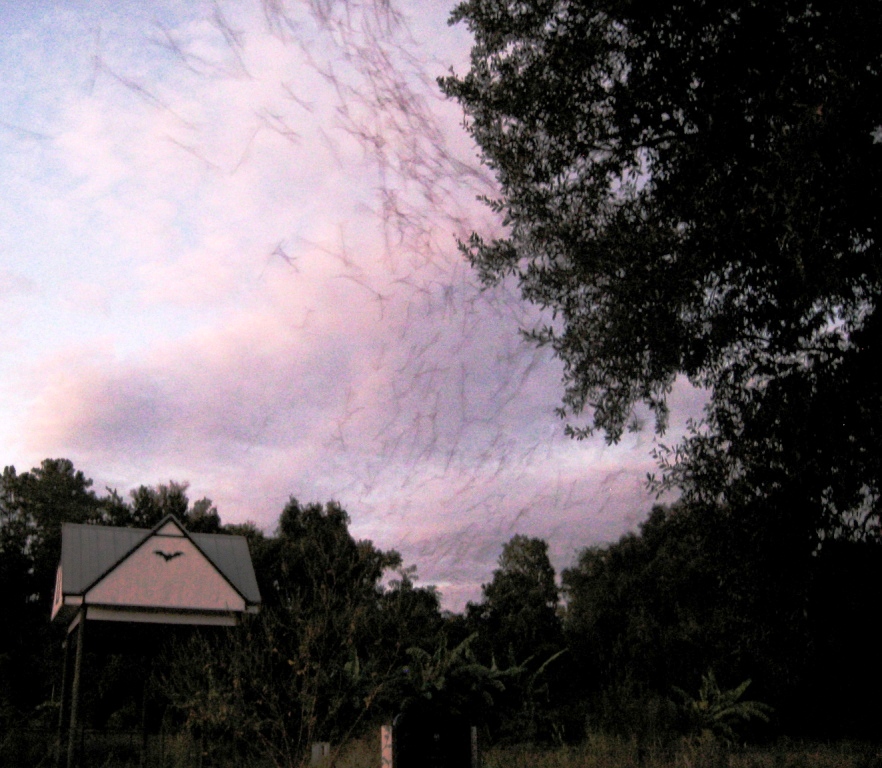 Looking for unique things to do in Gainesville, here something for ya – visit the University of Florida bat house and barns! Footballs and baseballs aren’t the only objects soaring through the sky at the University of Florida. Tens of thousands of bats inhabit the campus and their departure from the UF Bat Barns and Bat House each evening is one of Gainesville’s most interesting ecotourism attractions.

Whatever You Do, Don’t Scream
Arriving about 10 minutes before sunset, I secured a front row spot by leaning against a wood fence that served as a barrier between the spectators and a field with the bat barn and bat house. A group of spectators, composed of university students, visitors, and locals joined me as we waited for the nightly show. The stench of guano (bat dung) was strong yet tolerable.

While waiting for the sun to set, I watched dragonflies dance in the field but was interrupted when a bat swooped toward my face. Gasping, I leaned back as it immediately darted upward and over my head. Some insects are attracted to the carbon dioxide humans exhale and bats are attracted to insects. Bats may swoop by humans to grab insects and will not intentionally attack people.

It was just after sunset and I watched as bats began flying out one by one. Soon, the trickle of bats became a steady stream flowing from the bat facilities, bending around the branches of a tree and over the spectators heading toward Lake Alice behind the crowd. The stream of bats dissipated above the lake as they scattered to search for insects.

A couple of spectators screamed (high-pitched sounds are discouraged) as bats swooped by them but most who witnessed this amazing black river in the sky exhaled “oohs” and “ahhs.” After about 10 minutes, the constant flow of bats stopped and just like the bats, the spectators and I scattered to go about our evening.

History of the University of Florida Bat House and Barns
The University of Florida’s first bat house was built in 1991 because a colony of bats living in Johnson Hall was relocated when fire destroyed the building in 1987. The bat colony made the bleachers of the track and field stadium home and became a nuisance due to their smelly guano and urine.

Although several thousand bats were captured and released in the new bat house in 1991, for whatever reason, they did not permanently inhabit the house until 1995. Due to the weight of the bat colony, the bat house’s internal structure collapsed in 2009 and a year later, a bat barn was added. In 2017, a second bat barn was added because the original bat house has deteriorated and will eventually be removed. It’s believed these are the world’s largest occupied bat houses.

Most of the bats are Brazilian free-tailed bats (Tadarida brasiliensis) while the Southeastern bat (Myotis austroriparius), and Evening bat (Nycticeius humeralis) also inhabit the buildings. University of Florida estimates this bat population is 400,000 and nightly it consumes about 2.5 billion insects, such as mosquitoes, flies, and gnats. This is the equivalent of about 2,500 pounds!

Bat viewing season at the University of Florida is best beginning in spring through early summer when the evenings are calm and at least 65 degrees. The bats begin their departure just after sunset.

For those who can’t make the trip, or don’t want to get this close to bats, can view the live Bat-Cams. One shows the interior of a bat barn where viewers can see some of the bats in their habitat. The other video is an exterior view to watch the bats emerging at dusk.

Above is a video I shot in Oct. 2010 of the University of Florida Bat Houses. If the video does not play, view it on my YouTube channel.

The bat house and bat barns are located on the northwest corner of Lake Alice on Museum Road. Parking is just past the bat barns on the right. Arrive 15 to 20 minutes prior to sunset to see a handful of bats depart for the evening. After the sun sets, expect to see more of the colony stream out. The bat barns and bat house can be viewed year-round and there is no admission fee.

Where to Stay in Gainesville, Fla.
Hampton Inn & Suites Gainesville Downtown
101 SE 1st Ave.
Gainesville, FL 32601
Tel: (352) 240-9300
www.hamptoninnandsuitesgainesville.com
This hotel is located about 2 miles from the University of Florida.