Table for One: Is Everyone Watching?

Home » Culinary Travel » Table for One: Is Everyone Watching?

Last October I ventured down to Sanibel Island for a solo, mid-week getaway. In addition to a kayaking trip, walking the beach and soaking in the pool of the Holiday Inn Sanibel Island Beach Resort. I spent a good portion of the getaway eating my way through the island and everywhere I ate was delicious (four places to eat on Sanibel Island) but by far, my fave was The Bubble Room on Captiva Island. What a trip! 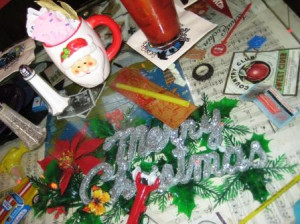 Above is a photo of the table. Need I say more? The decor can be simplified as Father Christmas married a Hollywood starlet – Christmas kitsch meets Hollywood glam.

Sanibel Island is pretty much couples-orientated and family-friendly – at least that’s what the advertising depicts – but I got along just fine on my own. When dining in the Sanibel restaurants, the hostesses didn’t make me feel like a one-woman-show like other restaurants have.

That Awkward Feeling When…

Perhaps the most awkward solo dining moment I’ve experienced was during my great San Francisco to Seattle solo road trip in 2007 when dining at Mt. Rainier’s National Park Inn restaurant. The dining room was practically empty and rather than seating me in a four-top table against the wall or window, was seated smack-dab in the middle of the dining room at a round, six-top. (For those who aren’t up on restaurant-speak, a six-top is a table made to accommodate six people.)

While the sensation of people staring at me while eating alone is usually a figment of my imagination, there was no imagination this time. Indeed people were staring so how do I fight back? Start chatting up the waitstaff. Turned out some of them worked in the Everglades with my late, former husband, so we had lots to talk about. 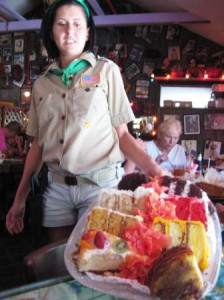 Solo dining was a big obstacle to traveling solo and I credit business travel with helping me overcome the self consciousness when chowing alone. There was a fear of people watching me or fear they were taking pity on me for traveling alone. Soon I realized, “Who cares what they think? I’m not going to see these people again.”

Business trips taught me eating alone off the hotel room service menu or eating fast food take-out was lonely and missed opportunity. I regret my only trip to Sweden was primarily spent in my hotel room. I quickly wised up and when I traveled on my next international trip, I made the most of every minute in London. So much so, one morning I set the alarm for 5 a.m. to ride the Tube so I could at least see Buckingham Palace and make my 10 a.m. appointment back at the hotel. Eventually I learned enjoying independently-owned restaurants, visiting farmer’s markets, sampling wines at wineries, and visiting food manufacturing factories, are just as enjoyable as taking in sights. Most of my trips now revolve around culinary travel.

These days when dining solo I:

How about you? Are you comfortable dining solo?