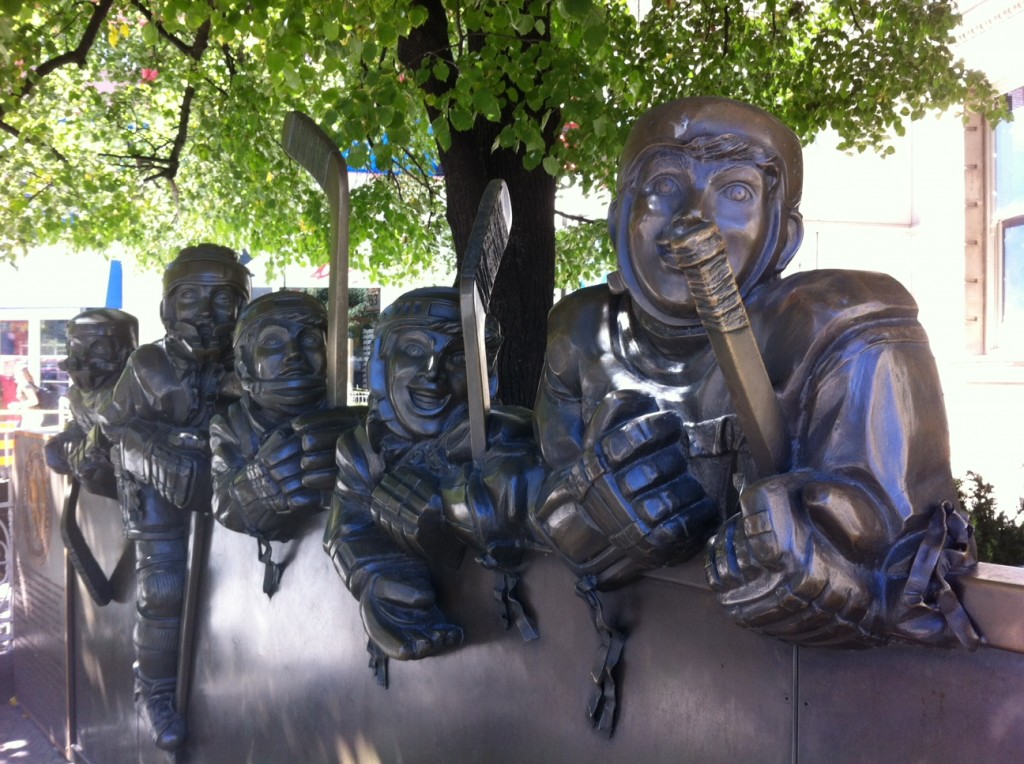 Meet the Best of the Best in the Hockey Hall of Fame, Toronto, Canada

Business travel is an excuse to “carpe diem” and make every minute of a quick trip. Last month I found myself in Toronto and vowing to seize the day and minute, I strolled Yonge Street, visited the Hockey Hall of Fame, ate a couple of meals, participated in a business event and slept, err, napped, before heading back to a conference in Tennessee via Asheville.

That’s the short of it while this is how I spent the day: 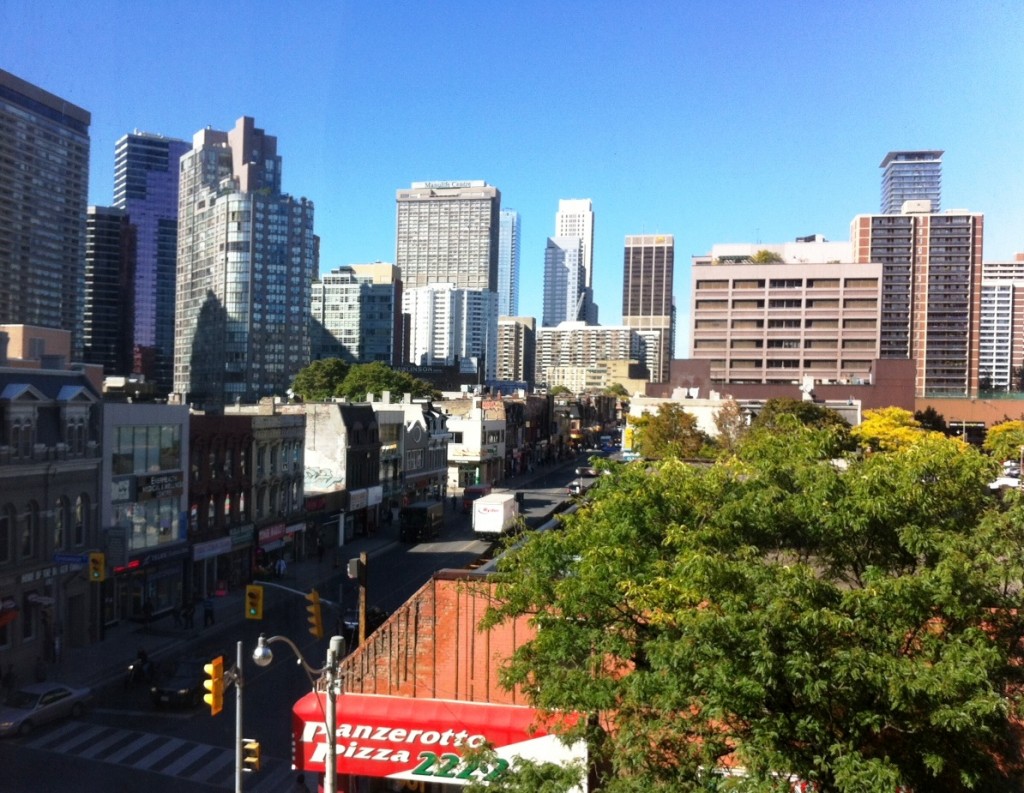 10:30 a.m.-ish
Landed at Toronto Pearson International Airport and grilled by Canadian customs and immigration agents. I had been up since 2:30 a.m. and wasn’t prepared for the peppering of questions and wondered if the trick question of, “When was the last time you were here?” would result in a search.

“When was I last in Canada or Toronto?” I innocently asked.

“When was the last time you were here,” the customs agent asked again.

“I was in Vancouver about a year ago and it’s been years since I was in Toronto.” I guess that was the right answer because I was advanced to immigration. (Or did I enter immigration first then customs?)

Just as I was about to exit the secured area, a security woman asked if I was going to need a taxi. “Stay away from those asking if you need a taxi,” she warned, “Go outside to the sign where it states ‘taxi’.”

“Oh, stay away from the gypsy cab drivers?” I asked.

I thanked her and scurried on my way, looking for the taxi sign while politely turning down men who asked if I needed a taxi. 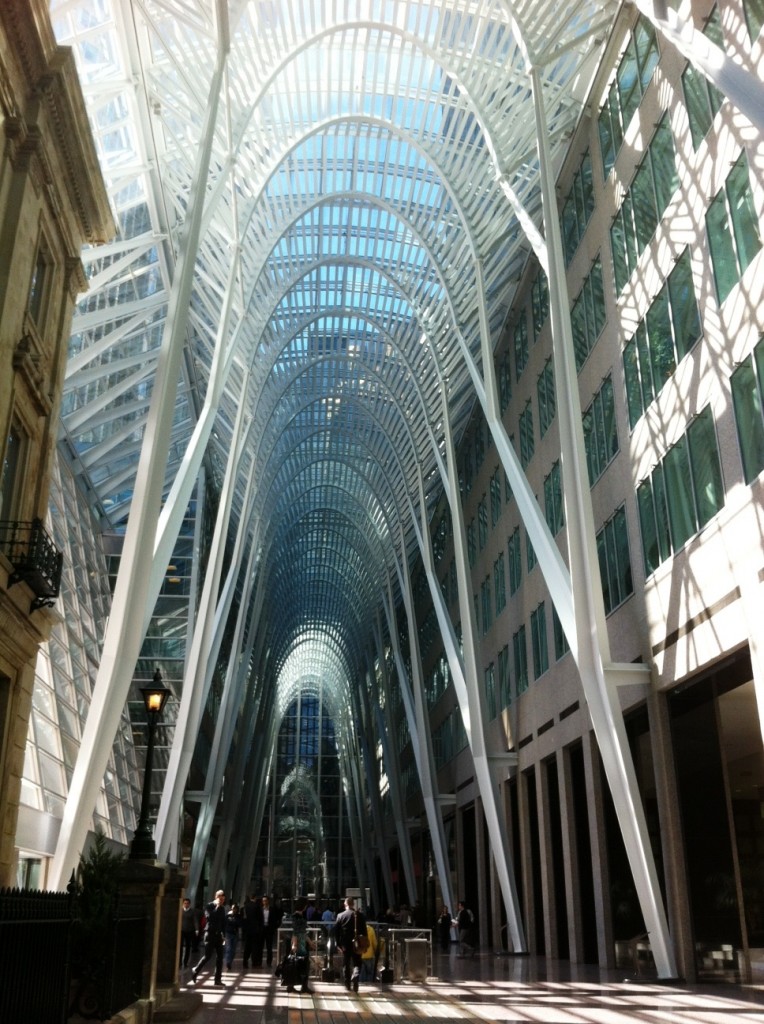 Inside the Amazing Brookfield Place, Toronto

Noon
After a CA$55 cab ride (plus tip) I arrived at the Courtyard Toronto Downtown (475 Yonge Street, Toronto) which has a great location with easy access to Toronto’s hotspots. Plus, it was great on the budget. Although traveling for business, I’m still budget-conscious.

Catching my second wind, I walked blocks and blocks and blocks down Yonge Street to the Hockey Hall of Fame (30 Yonge St
Toronto admission CA$17.50) located in gorgeous Brookfield Place on the corner of Yonge and Front Streets). In addition to shopping and dining, it offers office and rental venue space along with amazing architecture.

Although established in 1943, the Hockey Hall of Fame has been in its current location since 1993. It was originally in Kingston, Ontario, moved to Toronto in 1958 then , 1961 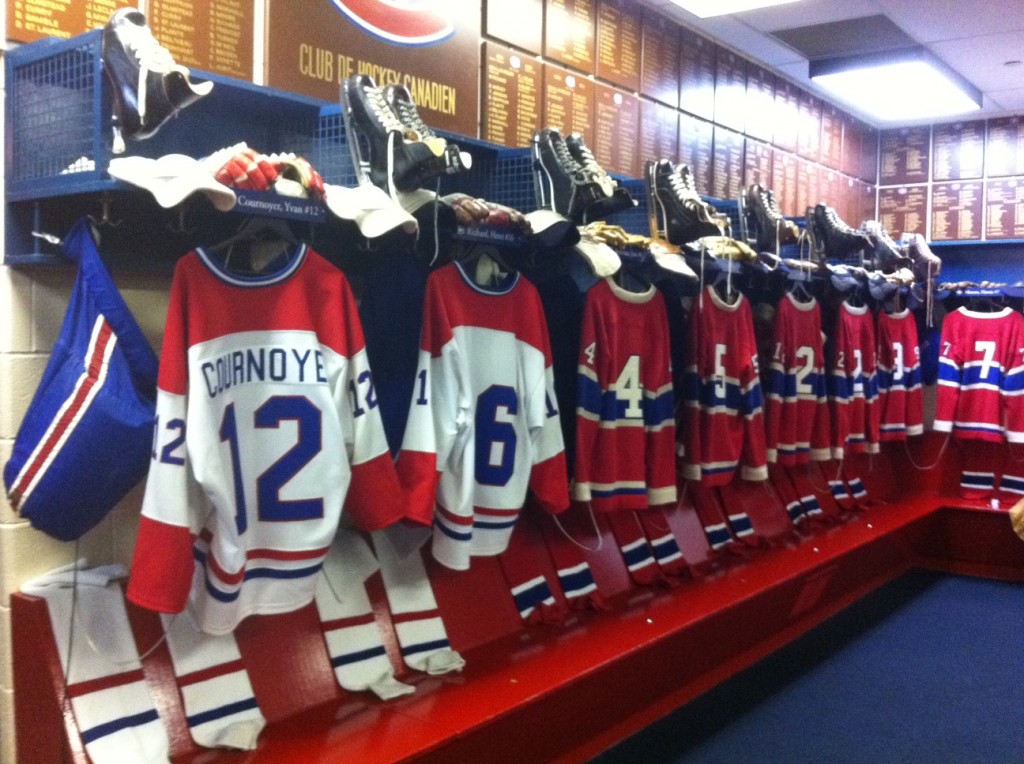 Hockey was in my blood when growing up and there was a time I was 100 percent obsessed with the sport. In my adult years and living in Florida, the obsession has waned but I still have an appreciation for it. Perhaps my expectations were low but if one world can describe the Hockey Hall of Fame – “exhilarating.” 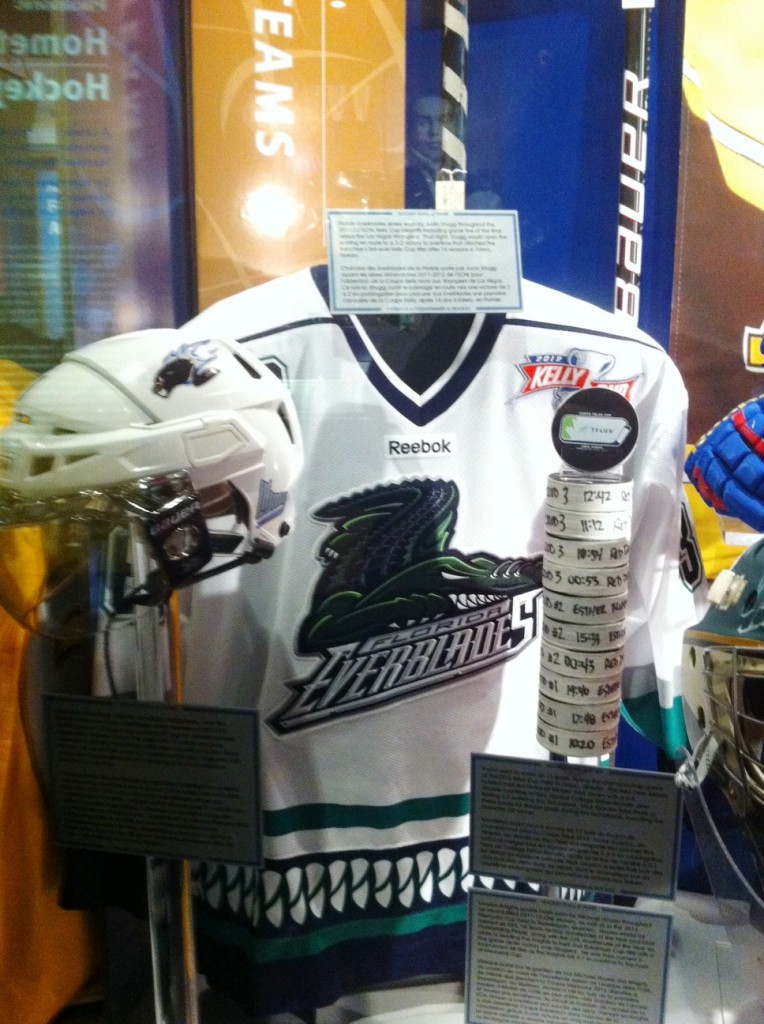 In addition to being a hall of fame, it’s a museum cataloging hockey history from its beginnings to today. And it’s just not about the pro’s, amateur hockey has its space, too. I was pleased as punch to see my local minor league team in one of the displays. The Florida Everblades, located in Estero (Fort Myers), Florida are the 2012 Eastern Conference Hockey League Champions and on display is a jersey worn by Just Shugg throughout the 2011-12 Kelly Cup playoffs. 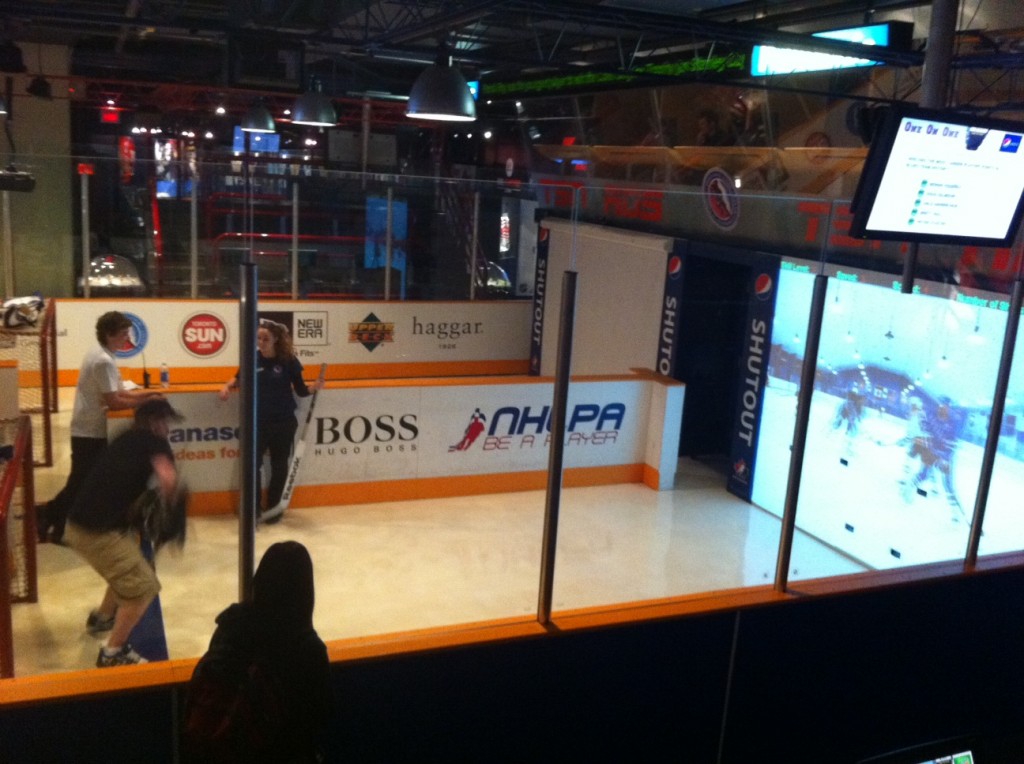 There were quite a few interactive activities to keep the kids (of all ages) engaged. Visitors can take their best shot against a goalie or try their blocking skills during a shootout. There’s also a press box area and spectator stands. 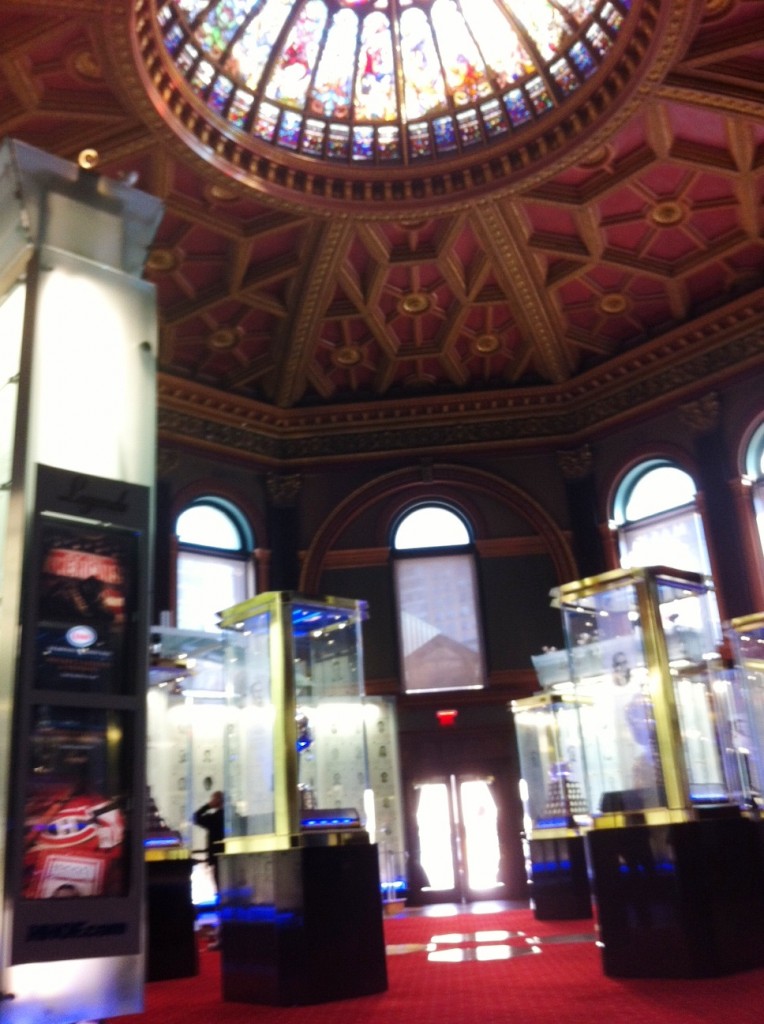 Cathedral to the Icons of Hockey in the Esso Great Hall, Hockey Hall of Fame

Angels sang as I entered the Esso Great Hall with the Cathedral of Hockey. It was absolutely gorgeous with dark-stained wood walls and colorful stained glass dome overhead. In vaults were championship trophies but across the room was the coveted Stanley Cup. Yes, right there was the freakin’ Stanely Cup! 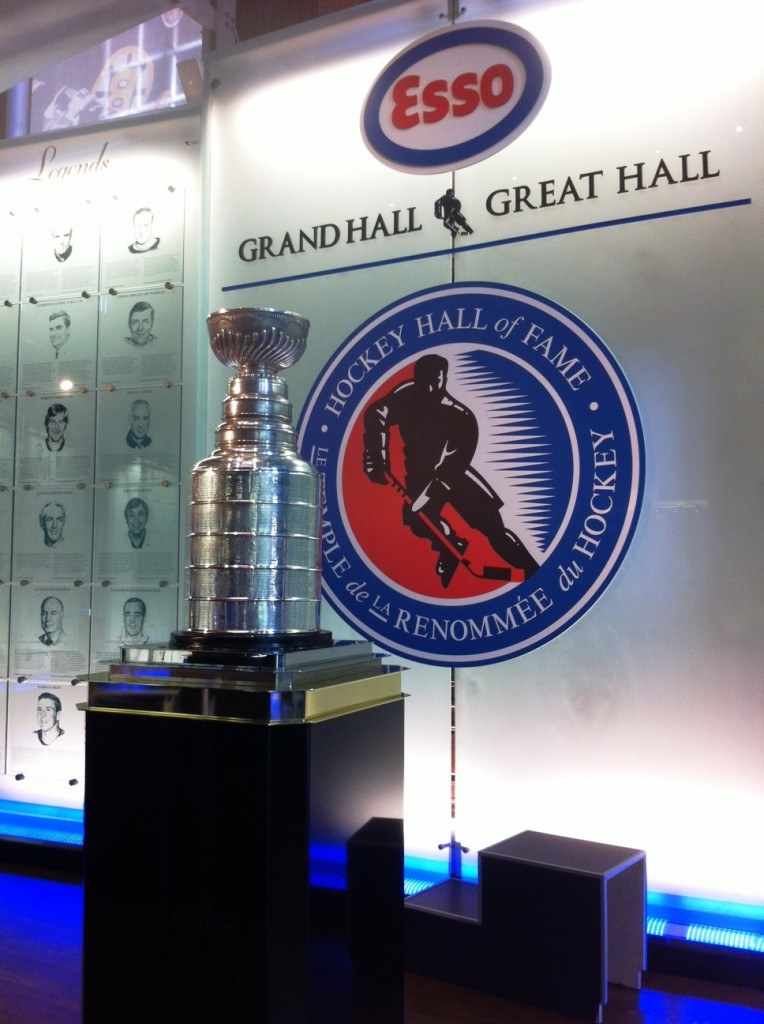 Get Up Close and Personal with the Stanley Cup, Hockey Hall of Fame

I spent about an hour inside the museum and although I could have spent longer, it was time to find lunch and prepare for the evening business event. 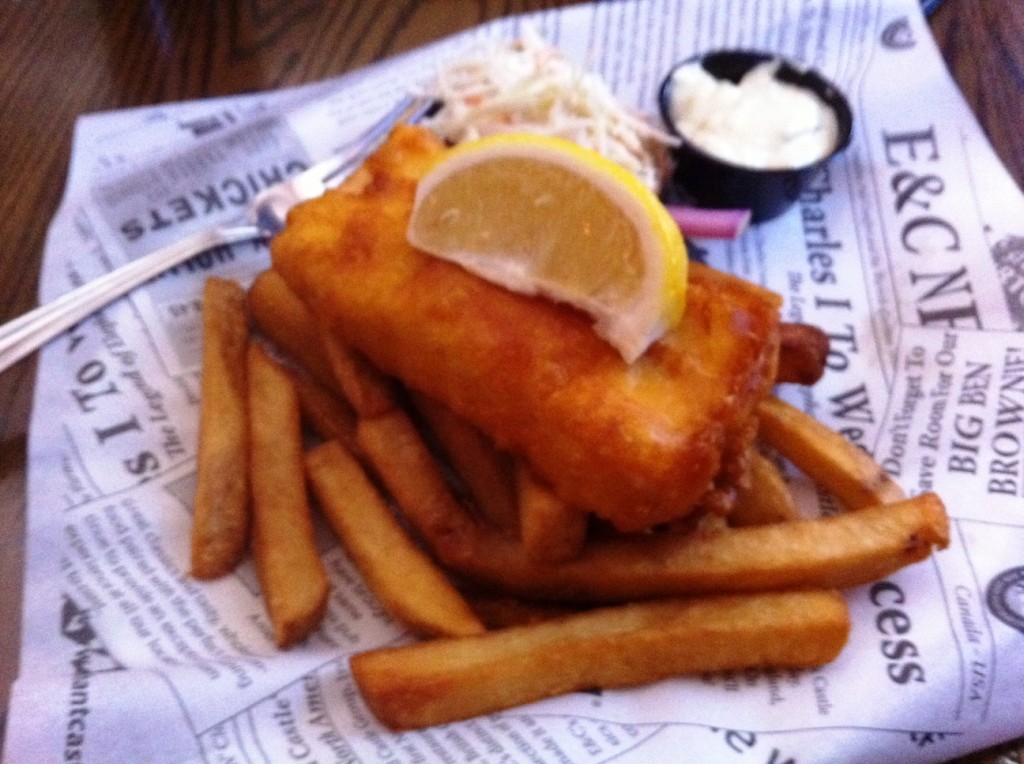 Lunch! There were tons of potential lunch spots, probably too many to choose, and I ended up at Elephant & Castle (378 Yonge Street, Toronto; Tel: 416-598-4003) for fish and chips. Although it’s a chain, there isn’t one near me and I know it’ll always give me that international feel and flavor.

No rest for the wicked! After taking a quick shower to freshen up and recharge, I met up with a colleague to head to our evening function. Afterward… 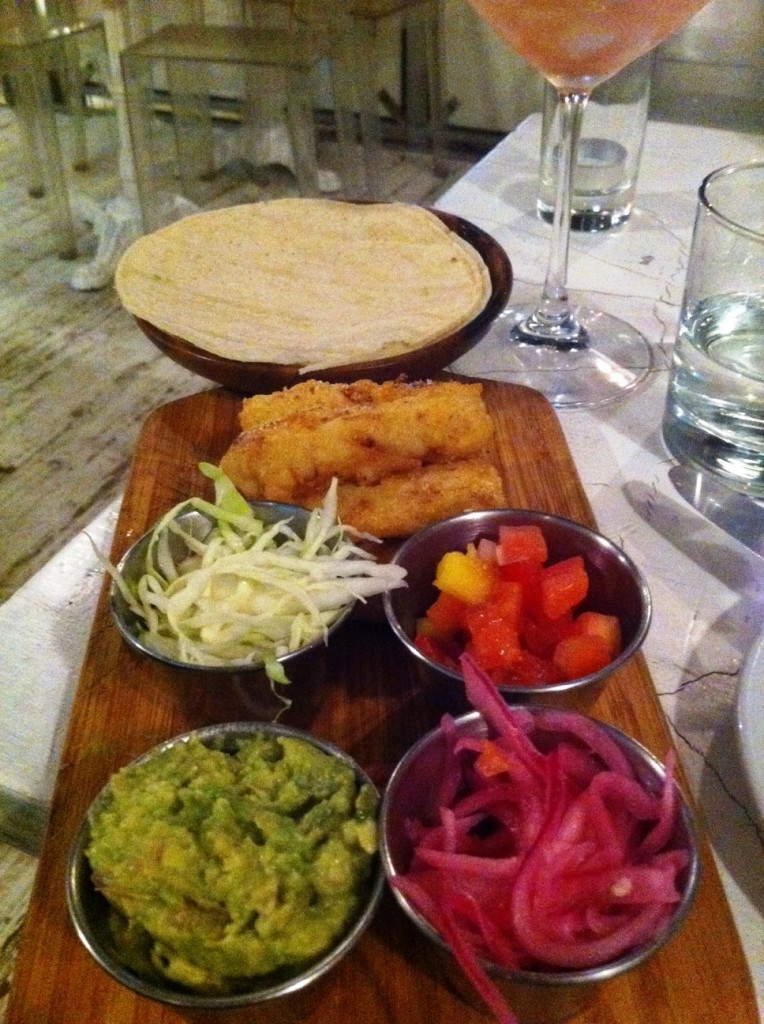 Fish Tacos at Wish in Toronto

Where to eat dinner in Toronto? My colleague and I stumbled upon (well, kind of stumbled upon, Siri recommended it among others) an adorable little place called Wish Restaurant (3 Charles Street East, Toronto). We sat outside on soaking up the cooler temps (compared to Florida’s 90+ temperatures). Our server said the it’s modeled after a restaurant someone would find on Miami’s South Beach with pockets of dining, cushions, lots of candles and white decor accented with pops of orange. 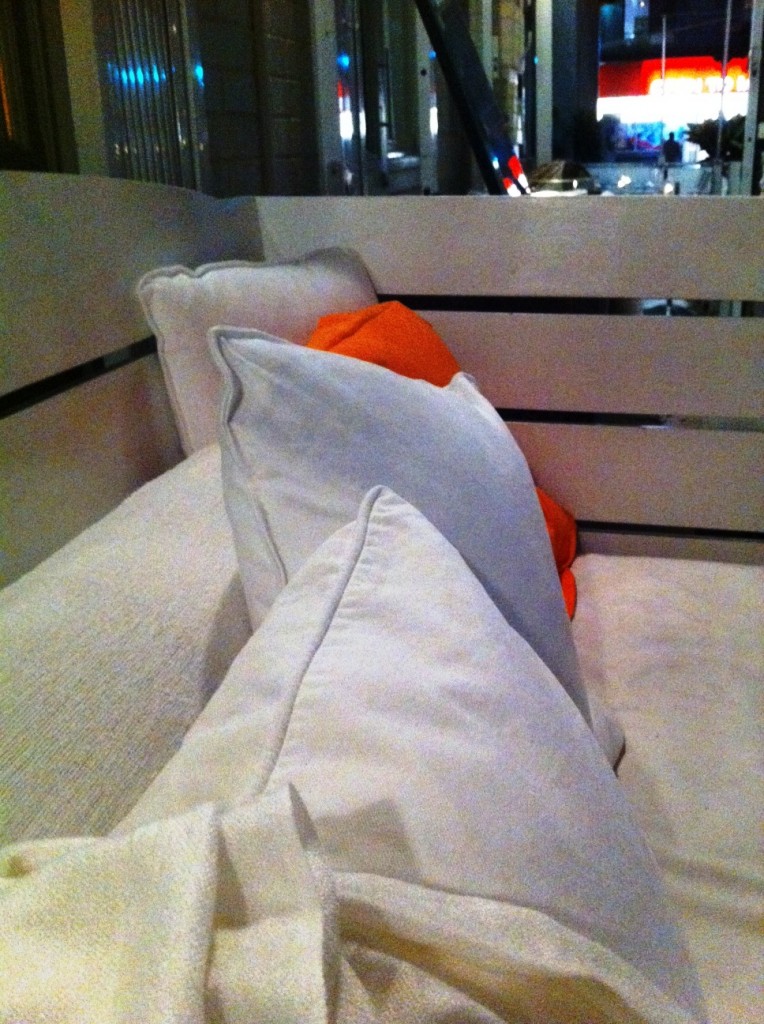 Sleep. Well, a nap. I was afraid of an alarm malfunction so I didn’t get much sleep. I even slept with the light on so I didn’t fall into a deep sleep.

Off to the airport!

The Delta counter wasn’t open but I was able to check in with a kiosk, which was fine because I didn’t have any check-on luggage. 4 a.m. the counter opened, I grabbed my paperwork and stood in line with hundreds of other to clear U.S. Customs which opened at 4:30 a.m. Don’t think just because you have a 6 a.m. flight you can show up at 4:30 because there are LOTS of other people waiting in line.While waiting in line, observe the “no cell phone” signs which means no talking on cell phones, no texting and no nothing with a mobile phone. You’ll get a strong scolding if you do so.

Clearing U.S. Customs was a breeze. The agent didn’t speak one word to me and was more interested in the people in line than me.

Cleared for takeoff, I buckled up and snuggled against the window to catch a 90-minute nap back into the U.S. What will I do with the CA$25 I came home with? Save it for June and Travel Blog Exchange for more adventures.