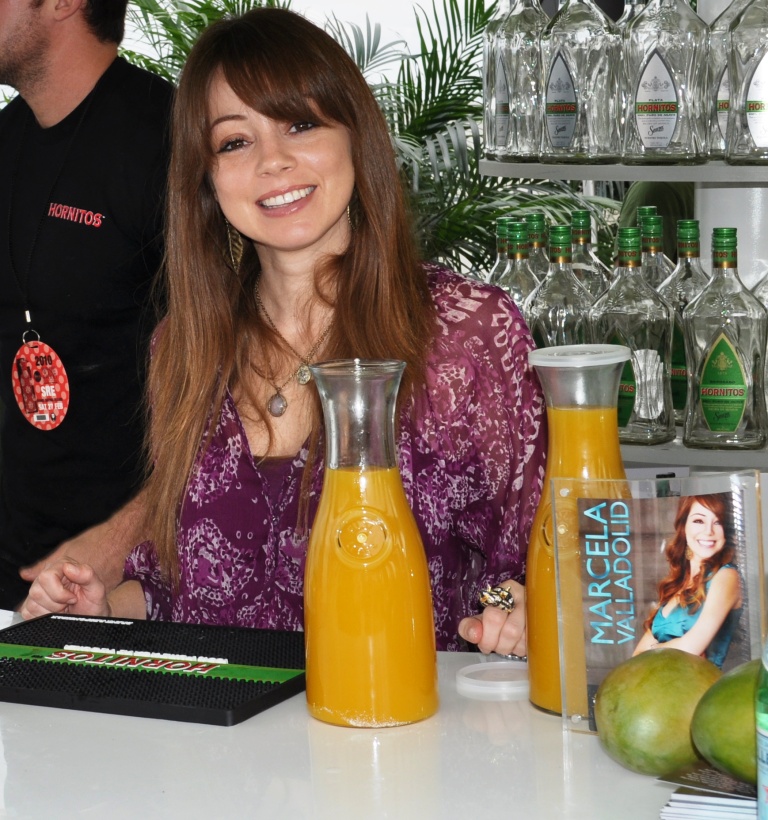 Yesterday was my whirlwind trip to Miami for the SoBe Wine & Food Festival and an opportunity to chat with Food Network’s Chef Marcela Valladolid of the TV show, Mexican Made Easy. Chef Marcela is a doll and I really enjoyed chatting with her. She has a contagious enthusiasm for creating authentic and fresh Mexican meals.

She travels to Baja two to three times a week, since her father is still lives there and only a 20-minute drive from her home in San Diego. So what are the three things this chef-on-the-go always travels with? Her son, Blackberry and camera.

Food Network’s newest celebrity chef, Marcela Valladolid, is passionate about making easy and real Mexican food. She shows others how through her TV show and cookbook.

Born in San Diego and raised in Tijuana, the 32-year-old professional chef is a former Bon Appétit magazine editor and contestant on The Apprentice: Martha Stewart (2005). She’s passionate about creating authentic and fresh Mexican food and infuses her enthusiasm into her television show, cookbook and live appearances. During the South Beach Wine and Food Festival in Miami Beach, Fla., on Saturday, Feb. 27, 2010, Chef Marcela took time for an interview before demonstrating how to make a couple of her favorite cocktails in the Cruzan Rum and Hornitos Tequila booth.

Q: Was Making Mexican Made Easy What You Expected?

Chef Marcela: I did have a cooking show in Spanish [Relatos con Sabor on Discovery en Español] so I knew what the process was, but it’s the Food Network, a totally different beast. It was a lot of fun. I was a little nervous to finally be on that platform. It was amazing to put the show together. The Food Network was awesome, they let me do my recipes and tell my stories. It was a blast.

Q: Do You Cook with Your Son Fausto?

Chef Marcela: He’s my inspiration, he’s my little guinea pig. It’s him and me when I need to try a new restaurant in town and he’s always my date. He’s a five-year-old foodie. He’s always in the kitchen with me testing and approving my recipes. He’s very much part of the recipe development process.

Q: What’s a Misconception Americans Have About Mexican Food?

Chef Marcela: I don’t think it’s as bad as it used to be. When I say Mexican food people envision burritos stuffed with seven different items…they envision nachos and they envision hard shell tacos which we don’t really eat in Mexico. But as I say all the time, you can’t knock those foods because they opened up doors for people like me. They brought tortillas…jalapeño…salsa into the U.S. We don’t eat nachos anywhere in Mexico but you have to appreciate there is a tortilla in there somewhere. All I’m doing is taking those ingredients and presenting them how they are supposed to be presented, cooked the way they are supposed to be cooked and combined the way they should be combined.

Q: What Was it Like Being on The Apprentice with Martha Stewart?

Chef Marcela: It was tough. It was two months away from my son but it opened up a lot of doors. I met Martha and she was great to me and it was a wonderful experience but it was tough…It kind of brings out the out the worst in people…to be put in a tight space and competing for the same job. You don’t eat, you don’t sleep and you don’t see your family and I didn’t see my son. It was hectic but worth it in the end.

And how easy are Chef Marcela’s Mexican recipes? During the interview a fan stopped by to let the Chef Marcela know she tried her mole (sauce) recipe which aired a few weeks back and it came out perfect.

In an iced martini shaker mix all ingredients and strain into a glass. If desired, garnish with mango slices. Recipe courtesy of Hornitos Tequila and Marcela Valladolid.