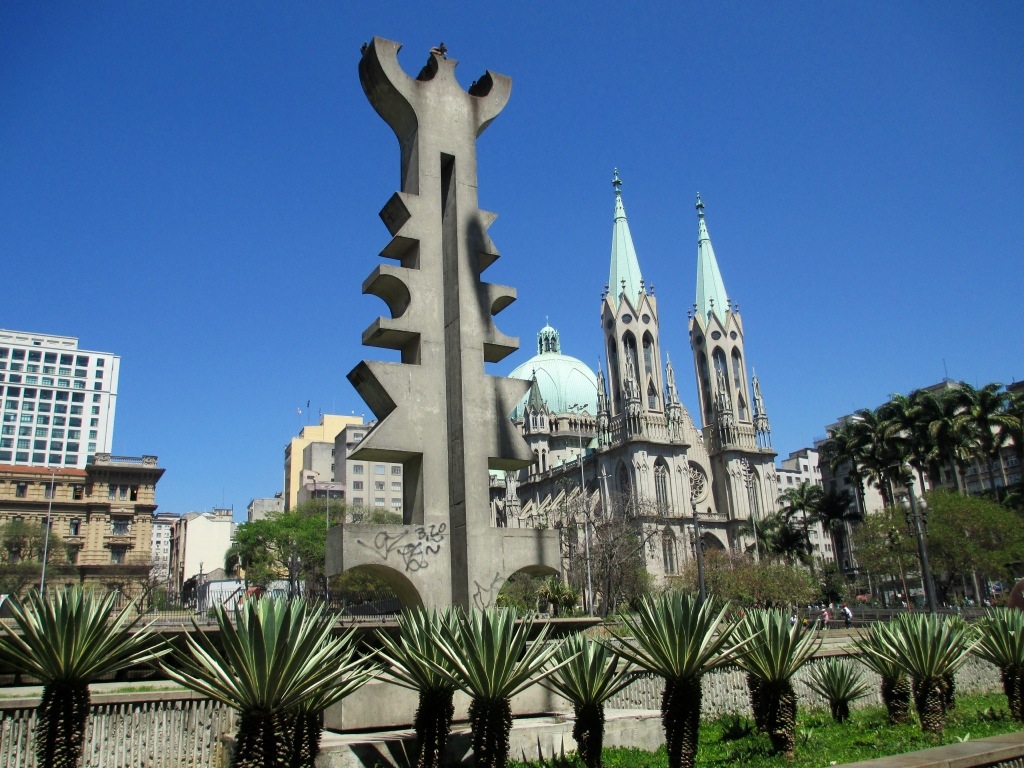 One of Many Sculptures Near São Paulo Metropolitan Cathedral, São Paulo, Brazil, Sept. 2014.

When traveling to someplace new, I’m a planner. Today, I found myself with a free day in São Paulo, Brazil, totally unprepared. I won’t get into the details as to why I ended up with a free day but when traveling for business, you just have to punt when you’re not sure what to do. 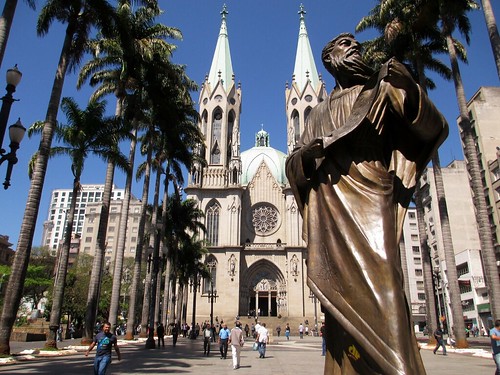 I arrived last night after about a 12-hour travel day, not including the 3 a.m. wake up call and 90-minute drive to the airport at o’dark-thirty in order to be there two hours before my flight on Copa Airlines. Weird thing about traveling to Brazil is although the flight time is in the double-digits from the U.S., the time change varies between one and three hours, depending on the time of year. It’s nice because there’s no jet lag.

So, I awoke refreshed and not wanting to waste the opportunity, I checked the TripAdvisor app to see what attractions were within walking distance. I stopped by the hotel’s concierge’s desk – which it seems is staffed with the hotel’s only English speakers – who suggested I visit the city center – specifically the São Paulo Metropolitan Cathedral.

This would require taking the Metro and she assured me it was “very easy, signs are in English.” She also told me I’d need to take a taxi to the Metro station and it would be about R$15. (about $7.50 U.S.)

Although this is my first time visiting São Paulo, this is my third visit to Brazil and I’ve learned a couple of things. One, taxi fare is typically more than what the front desk clerk says. Two, if you expect to find sings or even people who speak English, good luck. They’re almost non-existent. 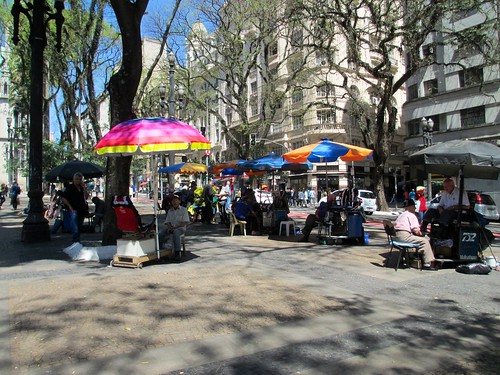 I have to admit, I was scared taking the Metro because of what I’ve heard about São Paulo. Several years ago businessmen presented to a group in the county I work and they said they liked our county because they felt safe unlike in São Paulo where they need to be concerned about being kidnapped and locked in car trunks. I’m not sure if they were trying to use humor but that statement stuck with me. I stayed alert and kept my bag close to me to prevent anything bad from happening.

Taxi fare was R$20 and the only sign I saw in English at the Metro station was “exit.” A smile and “please” and “thank you” in Portuguese get you somewhere and I was able to purchase a ticket (R$3, one way) and make my way up the Metro line to the Se Station where it was easy to find the cathedral. 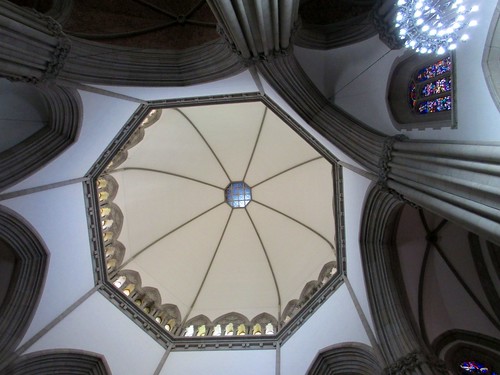 I probably wasn’t supposed to snap this of the ceiling, but everyone else was taking photos. Inside São Paulo Metropolitan Cathedral, São Paulo, Brazil.

Unfortunately, Portuguese just doesn’t stick with me and I’m guessing it was to my advantage. The cathedral seemed to be a hub for beggars but because I couldn’t understand what they were saying, I didn’t realize they were speaking to me or once they realized I couldn’t speak their language, they went on their way.

The cathedral was stunning on the outside and inside. Of course, I couldn’t understand most of what was written, other than the main sign in the entryway, but just admiring the decor and remembering my Catholic roots was enough to process it all. I took a few moments to sit in one of the dark-wood pews to soak in the peacefulness and pray for the awesome life I’m living.

Afterward, I made a quick walk around several large-scale sculptures located nearby. The sleeping and sitting homeless people intimidated me so my walk was quick and after an hour visit, I was back on the Metro, in a taxi and back to the hotel without incident. Finding lunch was a whole other adventure…