Alligator Wrestling? Oh, Yeah. I Did That at Gatorland in Orlando, Fla.

Home » Featured » Alligator Wrestling? Oh, Yeah. I Did That at Gatorland in Orlando, Fla. It’s been a while since I have had something six feet, lean and muscular between my thighs. I’m a gal with standards and straddling a 180-pound alligator wasn’t what I had in mind to relieve me of my, uh, um, dry spell. And hey, get your mind outta the gutter! 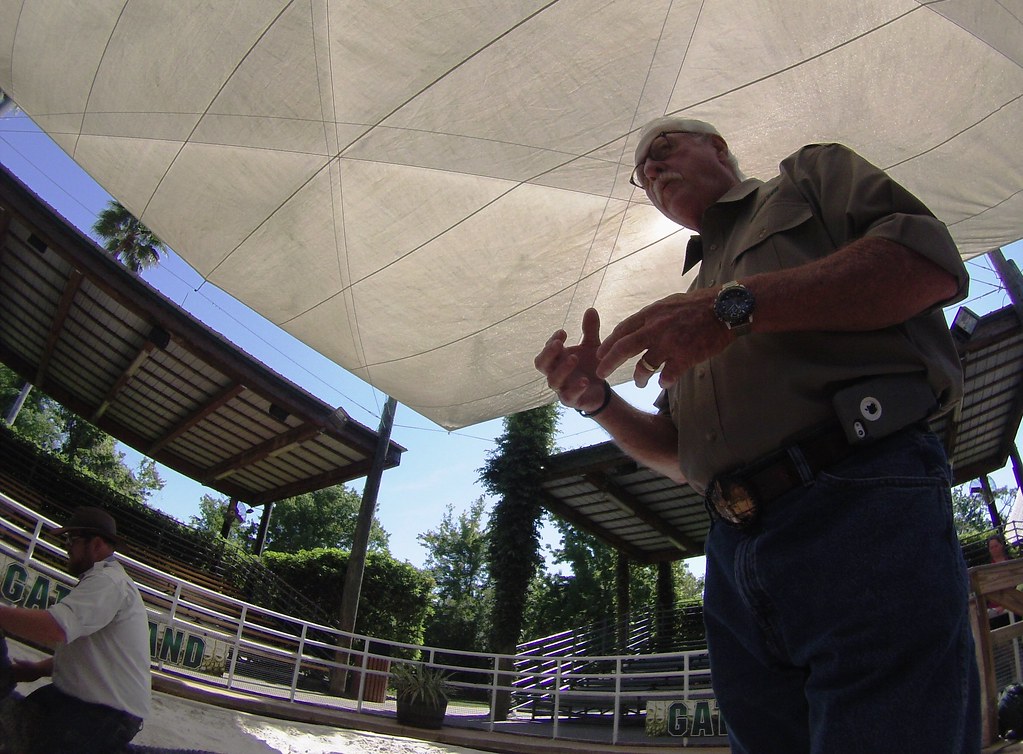 Although his fierce, toothy grin with 80-some razor-sharp teeth were intimidating, I was confident my reptile-charming skills could tame the beast. Plus, I thought of the dinner conversations I’d have at parties. Not that my Afghanistan stories aren’t still entertaining, but that was about 10 years ago and I need some fresh, quasi-dangerous stories to keep in my back pocket.

Now, don’t be thinking one day I woke up bored and decided to head into my Florida backyard to find an alligator to wrestle. Other than it being unlawful, alligator wrestling is dangerous and should only be done by trained professionals.

Looking Down on a Gator’s Snout at Gatorland in Orlando, Fla.

Oh, yes. People train for this dangerous sport and Tim Williams is the Dean of Gator Wrestling at Gatorland, Orlando’s best low-tech adventure park. He gave me a few pointers at the art form when I tried my hand at wrestling an alligator. Okay, ssshhh. I confess. I actually didn’t do much wrestling but did straddle and sit on the prehistoric-like animal in the center of the park’s Gator Wrestlin’ Arena and posed the gator for photos.

As I sat holding the pair of powerful jaws capable of crushing at a strength of 2,000 pounds per square inch and looking down on the gator’s grayish-yellow snout and flesh-tearing teeth, I felt a strange sensation between my thighs. 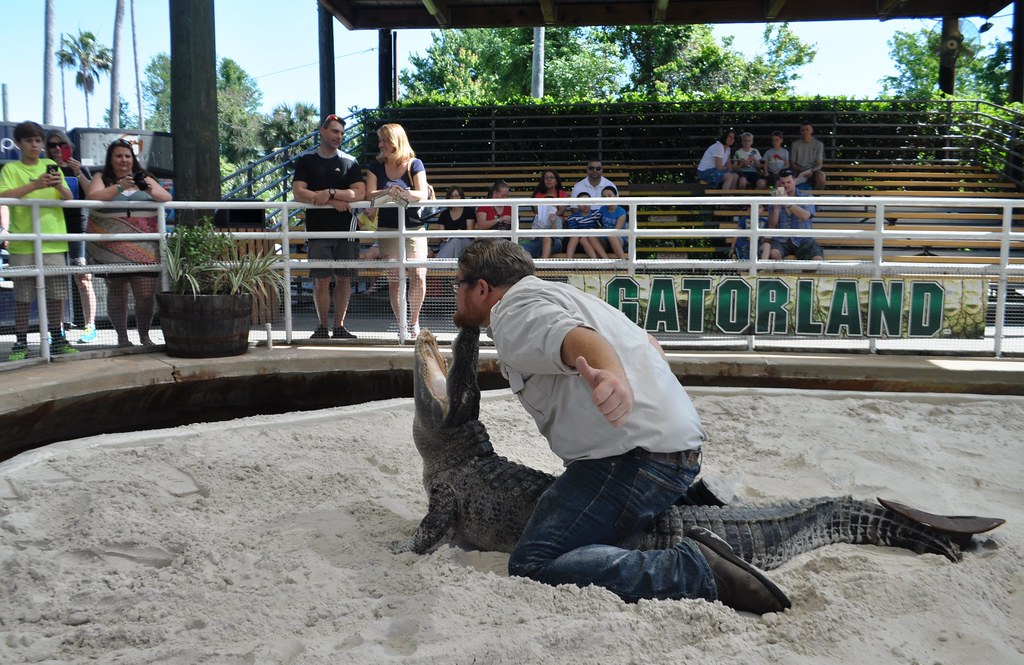 “Um, what’s it doing? Feels like it’s inflating and deflating under me,” I said to Gatorland alligator wrangler Justin White with a slight hint of panic. He’s the one who actually wrangled the six-foot reptile from a moat of a dozen gators.

The wrangler explained that’s how alligators regulate their bodies to surface and submerge in the water. The fact that I was able to easily hold back the gator’s head, just like the pro-gator wrangler, demonstrated how easy it is to do, yet alligators command respect since their jaws and tail are powerful. It was then I realized gator wrestling isn’t simply about entertainment. It’s about using entertainment and educate – edutainment – to inform people about these often misunderstood animals. #ToothySelfie! Posting Outside the Entrance of Gatorland in Orlando, Fla.

For a fee in addition to park admission, you can try your hand at Rookie Wrestling, too. In fact, Gatorland offers a whole menu of fun and engaging experiences ranging from interacting with wildlife to dangling your toes over alligator-rich waters. Oh, the park is home to an alligator population of about 1,800.

Gatorland is a human-sized Orlando attraction offering thrilling adventures in a low-tech manner such as getting nose-to-snout with reptiles, birds and other animals. When visiting, plan on staying at least half a day.

I left the park on an adrenaline rush I have never experienced and I have to say, I’m addicted to that feeling. Where can I get my next natural high?

Read more about my experience in the upcoming issue of Go Wanderer magazine.

The park is open daily and experiences are an additional fee on top of admission. Many experiences require advance reservations.