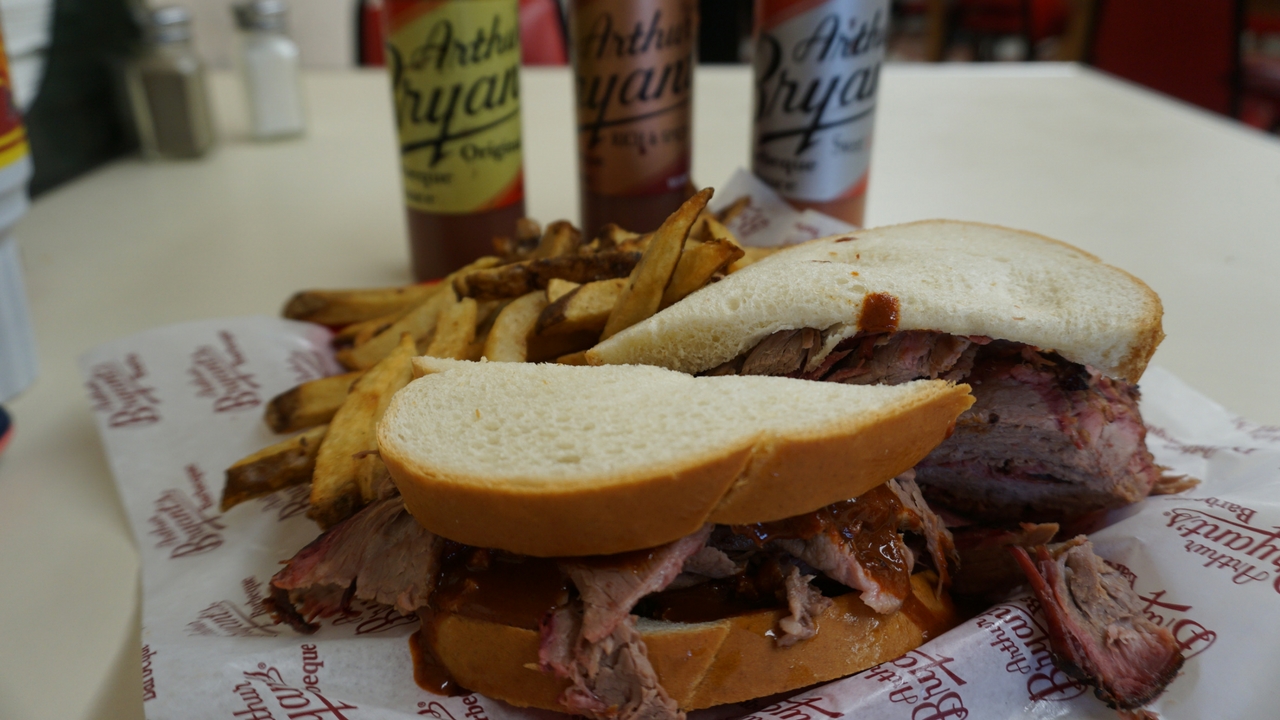 Traveling solo to Kansas City wasn’t my original intention when planning to attend BlogPaws, the pet bloggers’ conference earlier this month. I was hoping for an adventurous road trip with my dog Radcliff. As the conference date grew near, I did the math and decided it was more economical to fly on Allegiant nonstop from Punta Gorda into Kansas City and leave Radcliff with his pet sitter rather than driving two or three days each way. 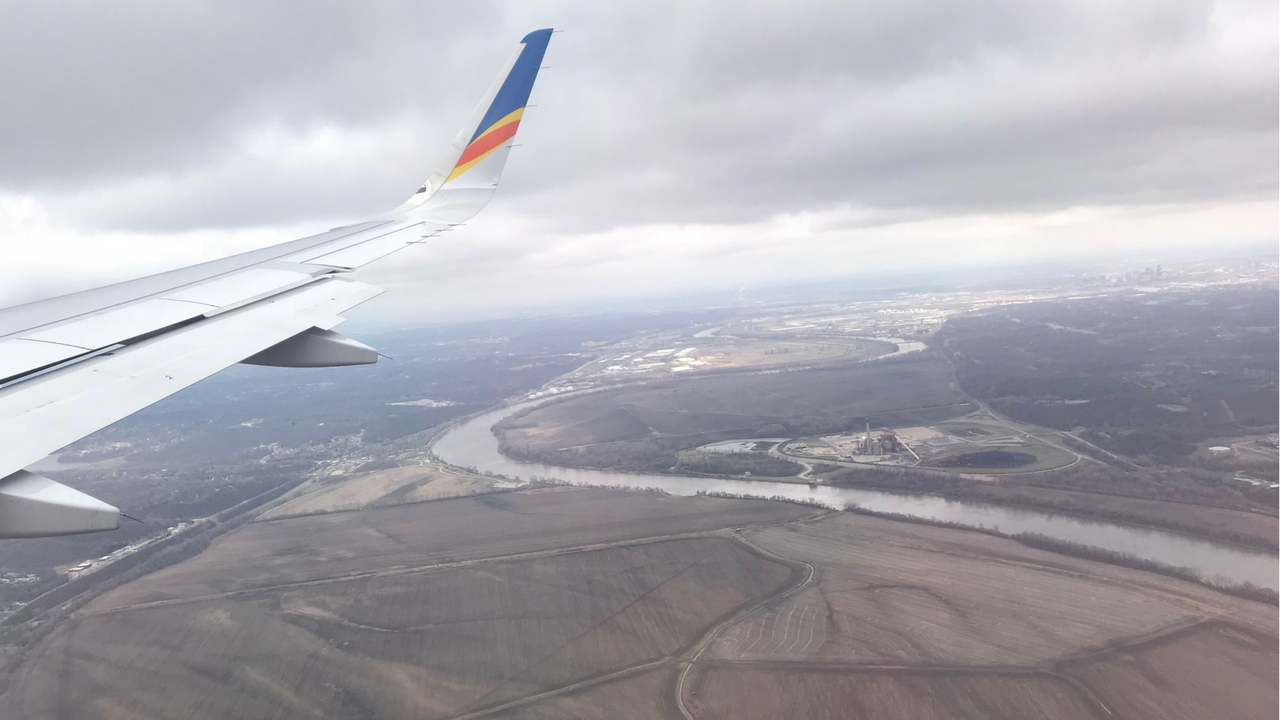 Sure, it would have been another way to see this great country but flying allowed me to spend a day at home to and tie up some ends, give me a mental and physical break to slow down, and give me some peace of mind. It also allowed me to explore some places I probably couldn’t have if Rad was with me. Most of my time was spent attending the BlogPaws Annual Conference at the Sheraton Kansas City Hotel at Crown Center, I found time to explore. Here are the things I did while traveling solo in Kansas City, Missouri. 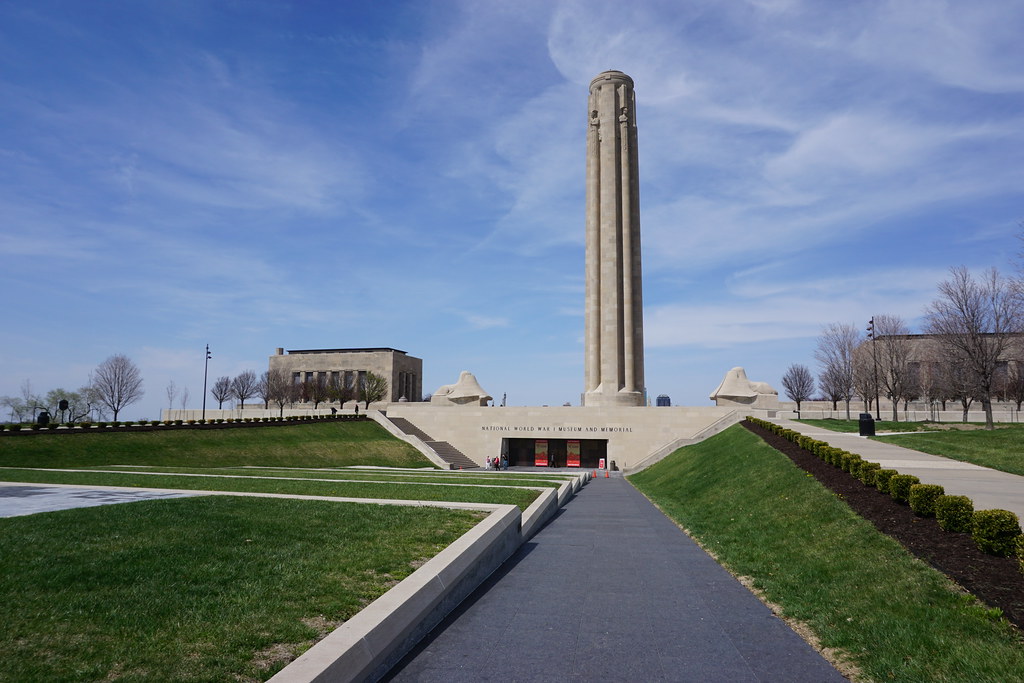 Honestly, it seems odd that a national memorial is located in Missouri, but the leaders and citizens of Kansas City came together shortly after World War I and formed the Liberty Memorial Association and raised funds to create a monument to honor men and women who served. Liberty Memorial a 28-foot tower, was dedicated in 1921 and completed and dedicated in 1926 by President Calvin Coolidge. 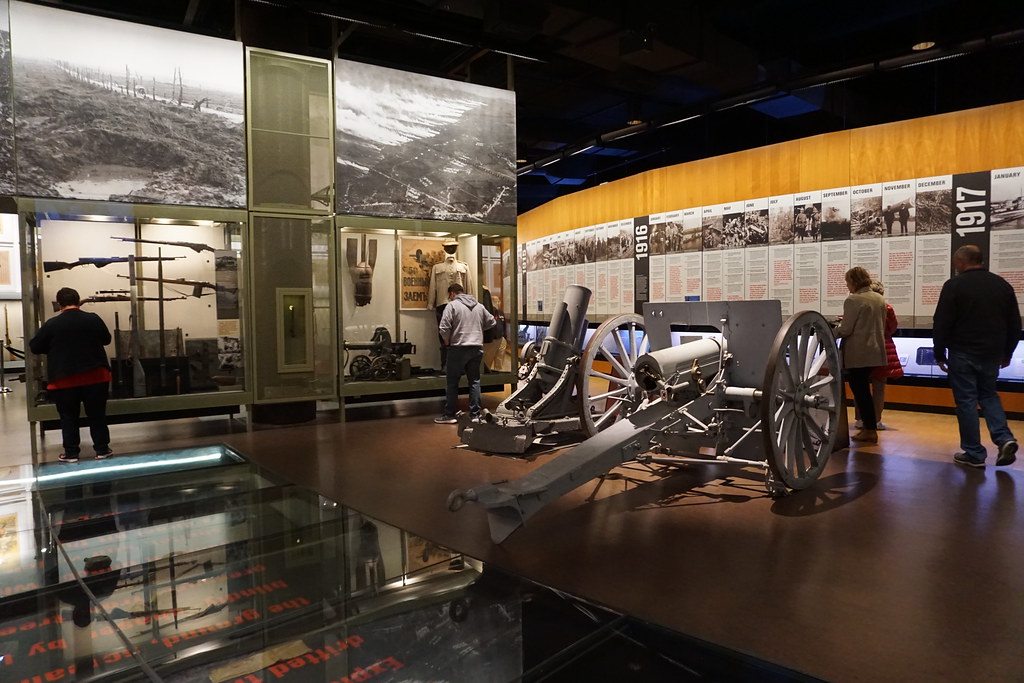 Inside the National WWI Museum and Memorial in Kansas City, Mo., April 20, 2018.

If you don’t have an issue with heights, purchase a ticket to ride the elevator up the Liberty Memorial (plus a walk up 45 steps) for a breathtaking view of Kansas City. The whole museum and memorial is well-done, and an important reminder of the sacrifices people have made in order to protect our freedoms. 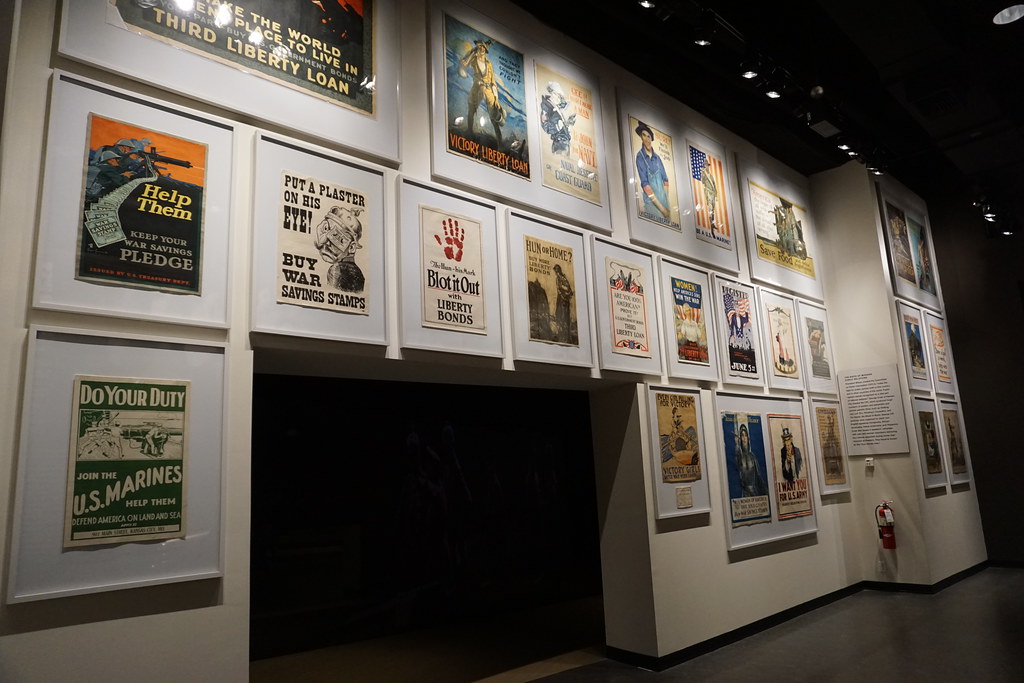 War-Time Posters at the Inside the National WWI Museum and Memorial in Kansas City, Mo., April 20, 2018. 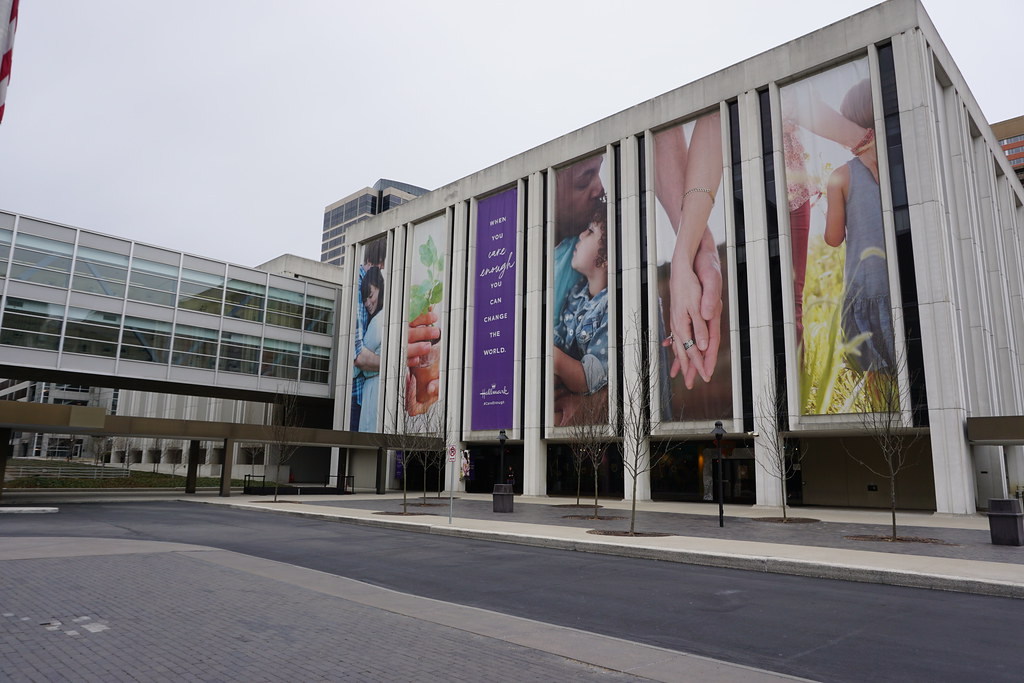 Hallmark Visitors Center
I absolutely love Hallmark and it’s my greeting card of choice when sending out cards. Maybe y’all knew this but Hallmark’s headquarters located in Kansas City! The Hallmark Visitors Center is a self-guided tour offering a beautiful journey through the company’s history beginning with founder Mr. Joyce Clyde Hall when he founded the company in 1910.

There’s so much packed in this visitors center including a history of greeting cards, Christmas trees staff made for Mr. Hall, overview of the Hallmark Keepsake Ornaments, and television commercials of today and yesterday (sidebar: bring a tissue, I get so emotional over nostalgia, I was shedding feel-good tears after watching one of the classic Hallmark commercials.) 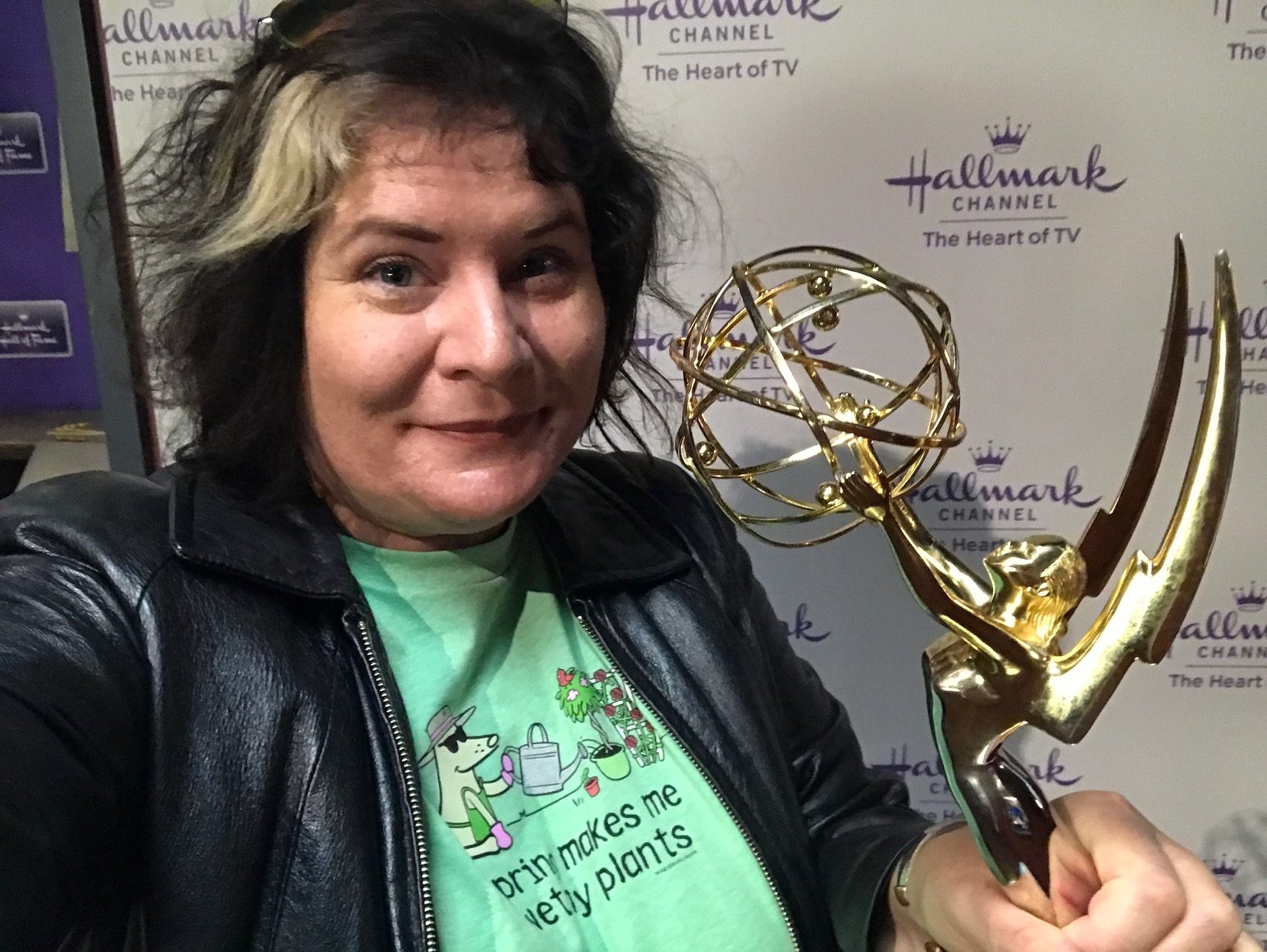 Me and a Hallmark Selfie at the Hallmark Visitors Center in Kansas City, Mo., April 21, 2018

Hold an Emmy won by the Hallmark television network and press a button to watch a sweet little bow made just for you. There’s a replica of the printing room, too. Toward the end of the tour is an area with artwork by various pop-artists including Andy Warhol. A Norman Rockwell is in another area of the center.

Pick something up from the small gift shop at the visitors center and a larger Hallmark Gold Crown(r) store is located in the nearby Crown Center shopping complex in the nearby. 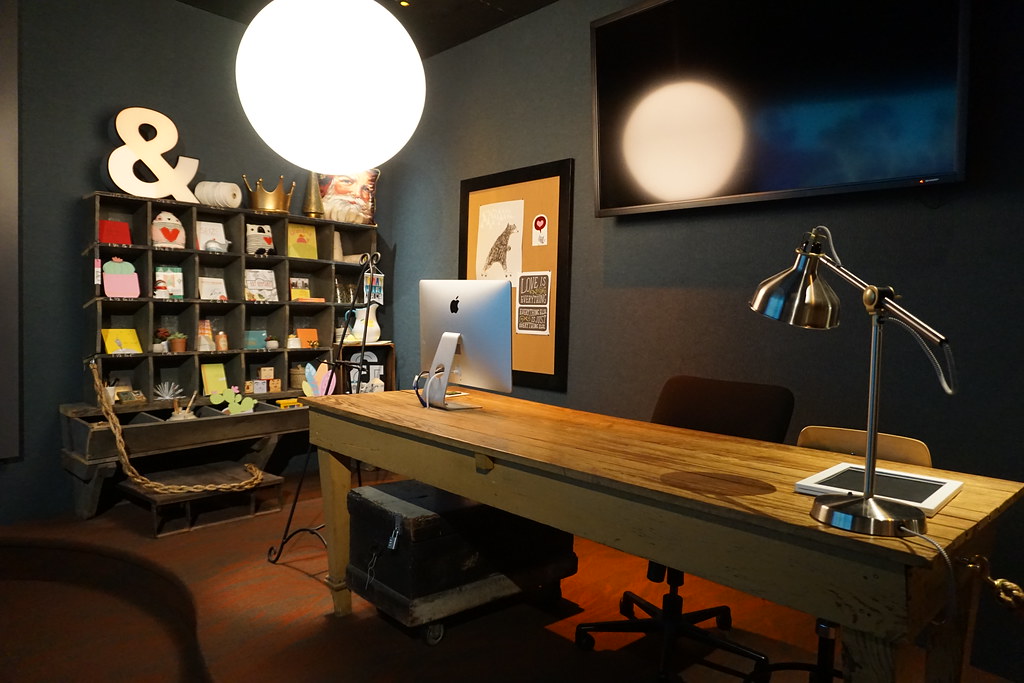 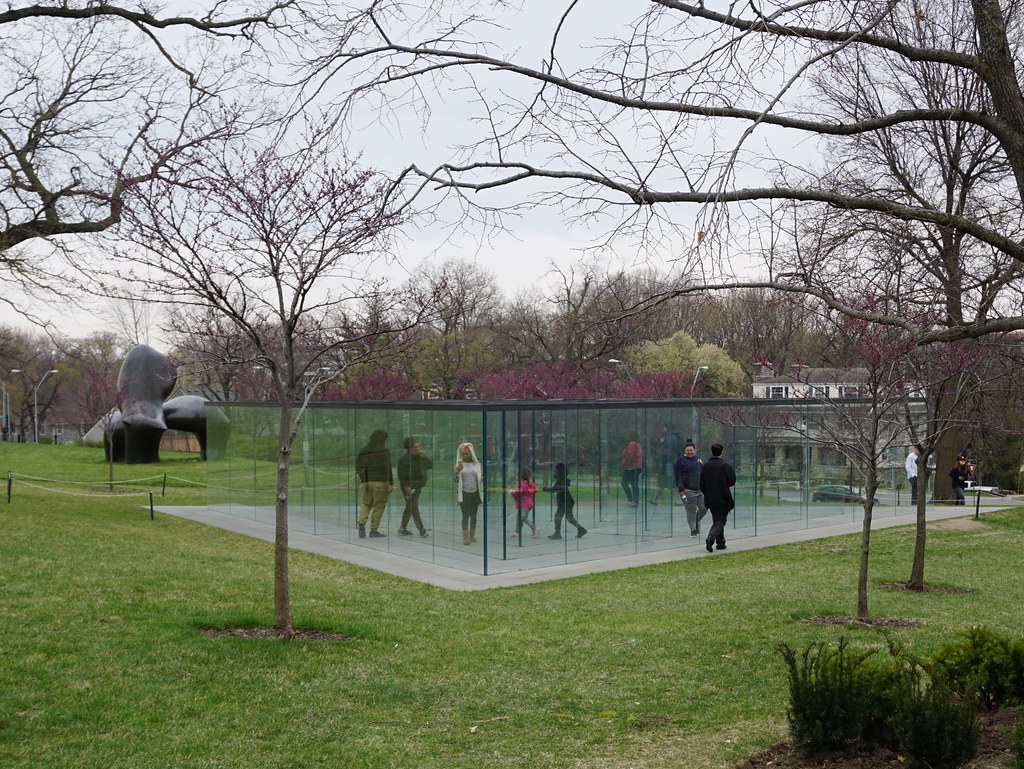 Glass Labyrinth
Labyrinths are on my radar of late (thanks to Lucy Tobias) and I walked the one in the Donald J. Hall Sculpture Park at the Nelson-Atkins Museum in Kansas City. There are so many wonderful sculptures on the grounds but because I was limited on time, I focused on walking the Glass Labyrinth.

It was installed in 2013 by Kansas City-born artist Robert Morris, is triangular, and entirely made of glass panes. It gave me a bit of anxiety because unlike other labyrinths I’ve walked, the only way out was the way in, meaning, I couldn’t take a step out and needed to follow the path. 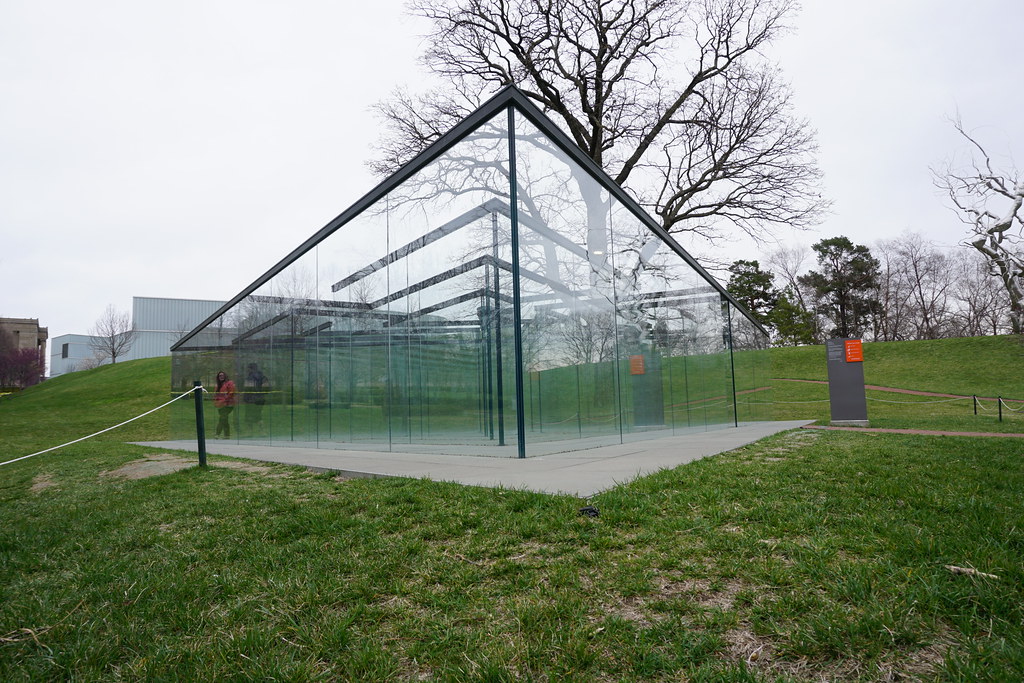 The walls are all clear glass creating a bit of a maze (even though labyrinths are not mazes) and I admit to stepping right into one of the panels! Prior to doing so, I watched as a kid was running through the labyrinth, despite signage asking visitors to walk slowly, and *whack!* He ran right into a pane. 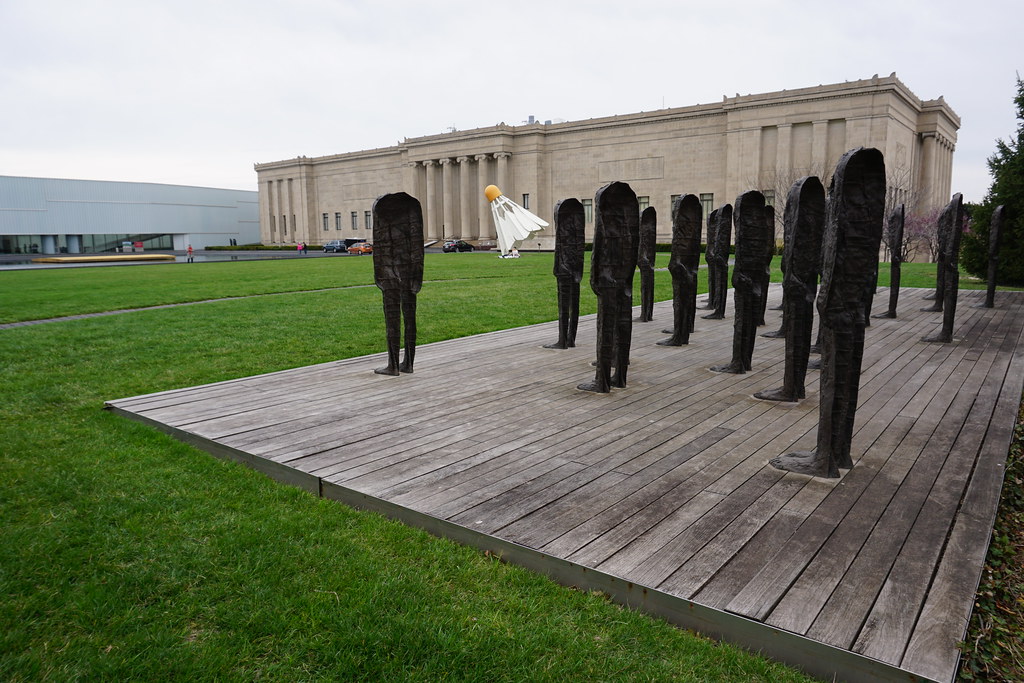 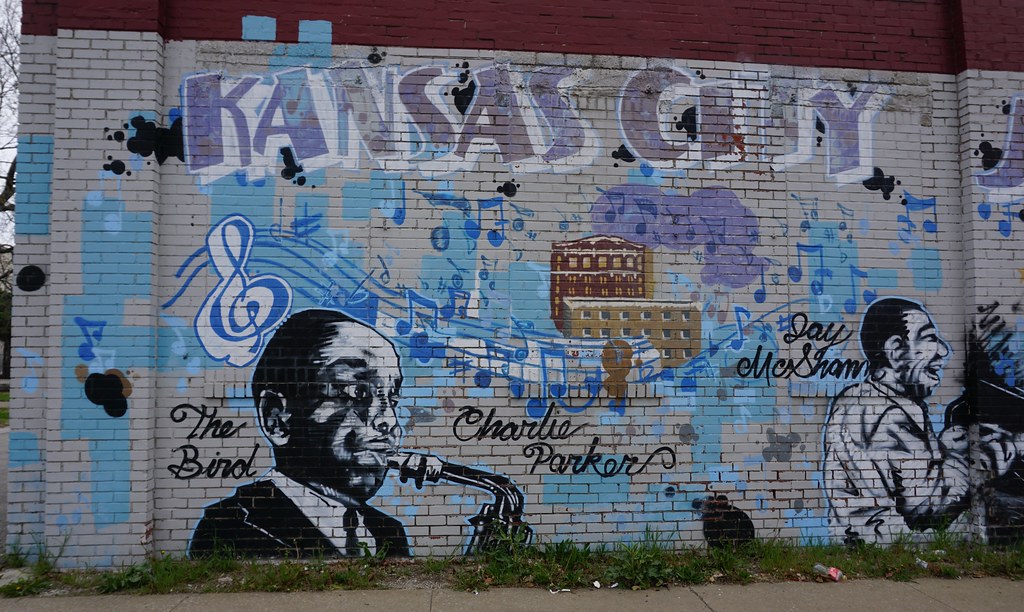 Where to Eat
Kansas City is the Barbecue Capital of the World and chock full of BBQ joints ranging from fancy to simple yet oh, so good! Thanks to Facebook, I had a BBQ spot in mind and upon landing, I asked around where the best barbecue was. My goal was to try three spots but ended up trying two (plus the hotel’s, I guess that counts, right?). One place that was recommended twice by locals and by a friend on Facebook was Arthur Bryant’s. The other was within walking distance from the hotel, Fiorella’s Jack Stack Barbecue. 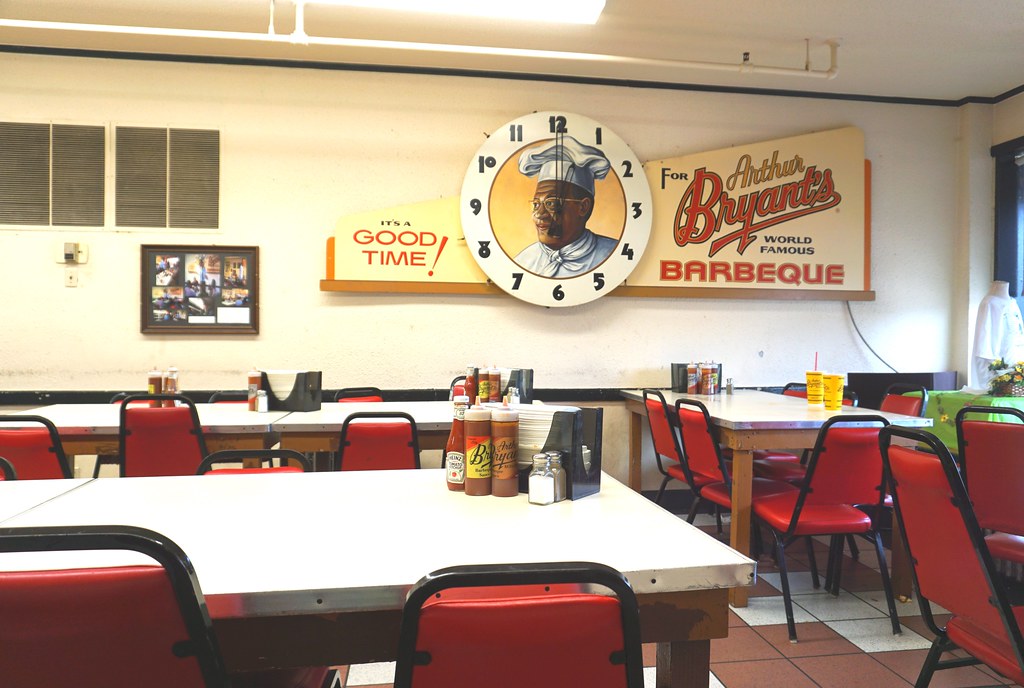 Arthur Bryant’s Barbecue
This is a little ways from Midtown but worth the trip! It’s no-nonsense, smoky barbecue as it should be. During my visit, at about 11:30 a.m. on a Saturday, one school group was leaving and another was coming and a bus group (I suspect a food tour) was finishing up. As I was leaving, there was a line at the counter. 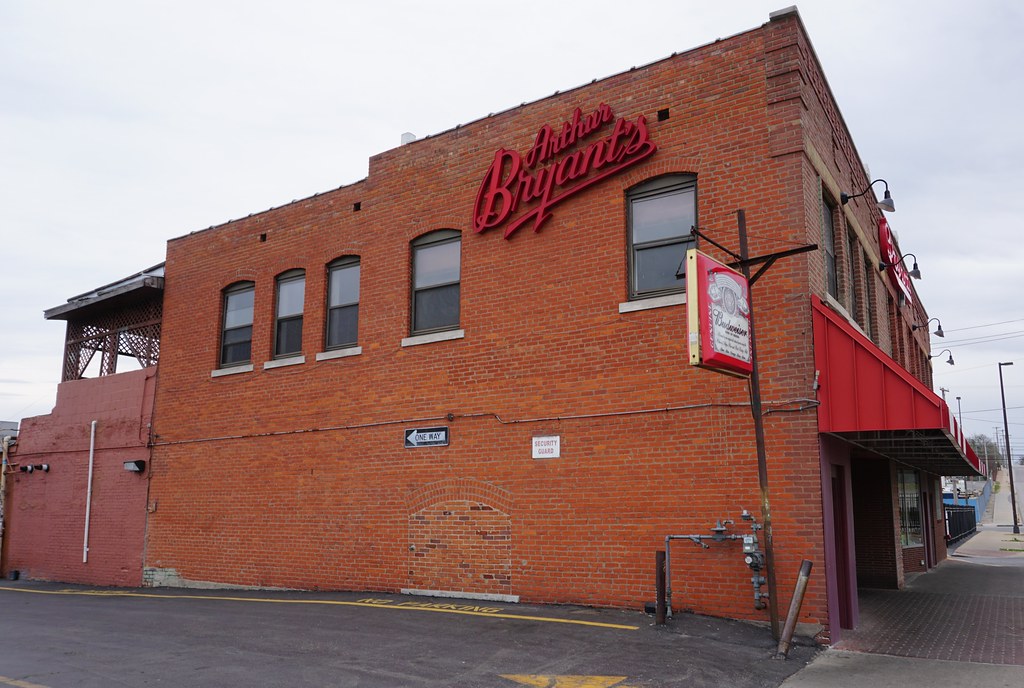 Arthur Bryant’s Barbecue is a seat-yourself kinda place (after you’ve picked up your order) where you’re given your barbecue on a sheet of wax paper served on a tray. Or, order take out. Each table has three sauces, Arthur Bryant’s Original, Sweet Heat (my fave!), and Rich and Spicy to top your meat of choice. I opted for a beef brisket sandwich and my, oh my! It was piled high with sliced meat, served on white bread, and delicious (I believe it was $10.95). Arthur Bryant’s Barbecue is open daily. (1727 Brooklyn Ave., Kansas City, MO 64127; Tel: (816) 231-1123; www.arthurbryantsbbq.com) 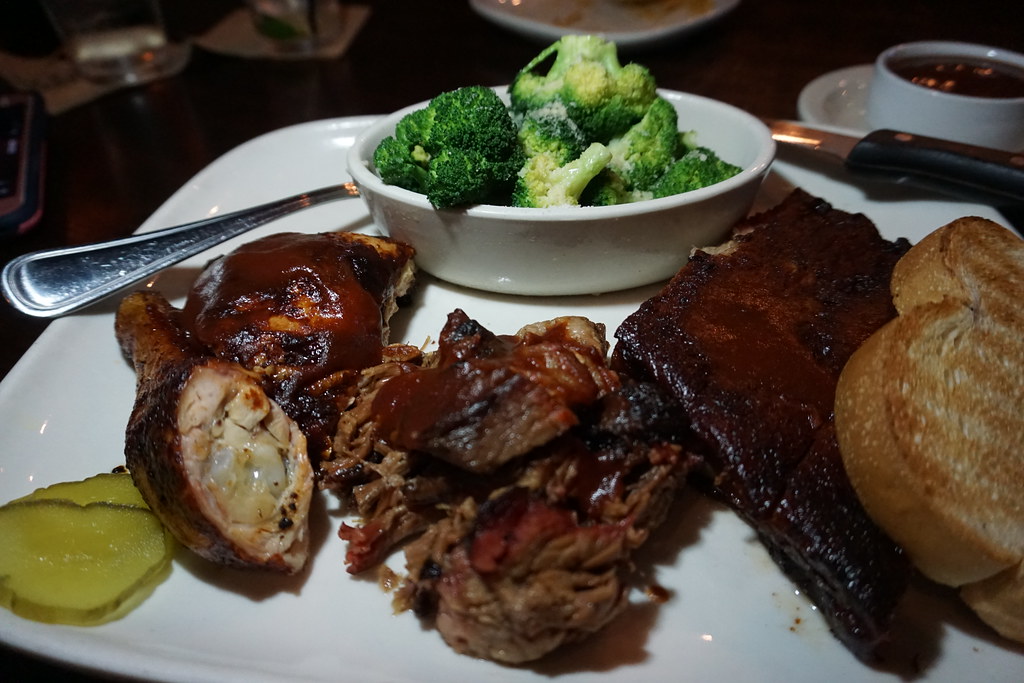 Fiorella’s Jack Stack Barbecue
This was much fancier than Arthur Bryant’s and a bit more expensive but very delicious. I tried the sampler plate and ended up munching on it for three days. It came with a chicken quarter, baby back ribs, and burnt ends (I didn’t know what burnt ends are and had to ask – if you don’t know what they are, it’s bits of meat cut at angles and seared on each side so they have an almost-crispy exterior and tender interior.) My body needed something green so I opted for garlic-buttered broccoli rather than coleslaw and fries. 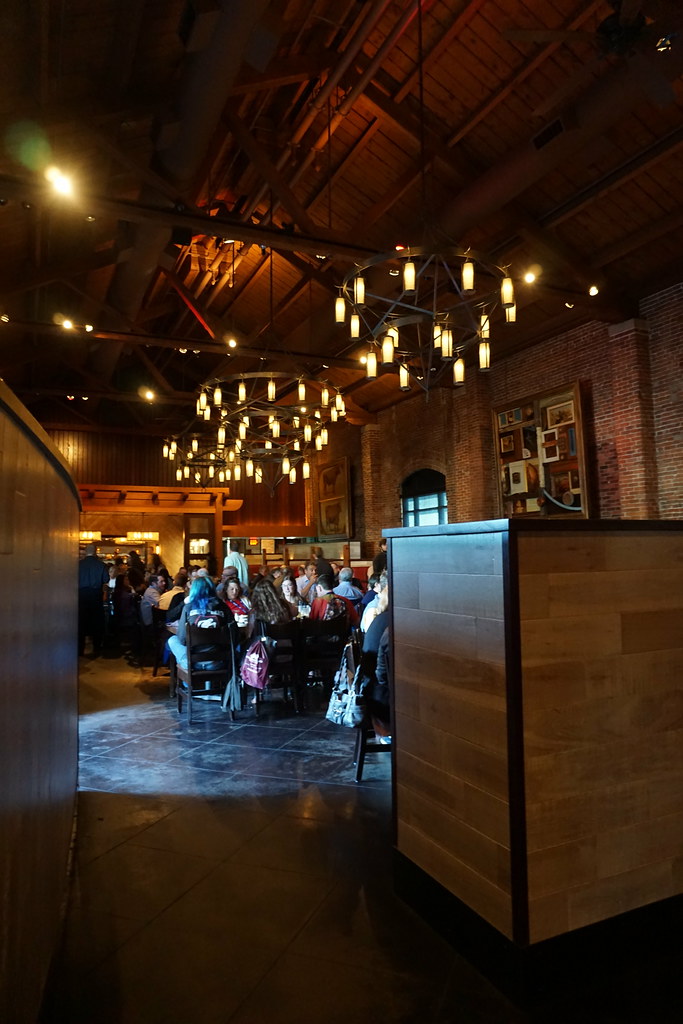 The Jack Stack Barbecue location I visited was in the historic Freight House in the Arts District. The restaurant has a cozy fireplace lounge and stunning 25-foot ceilings. It also had a wonderful, smoky smell upon walking in.

There was a bit of a wait for a table and although I could have cozied up to the bar to eat (that’s one of the benefits of traveling alone, easier to be find a seat at the bar), I opted to be seated in the dining room and ended up at a large booth. The staff were terrific, too. 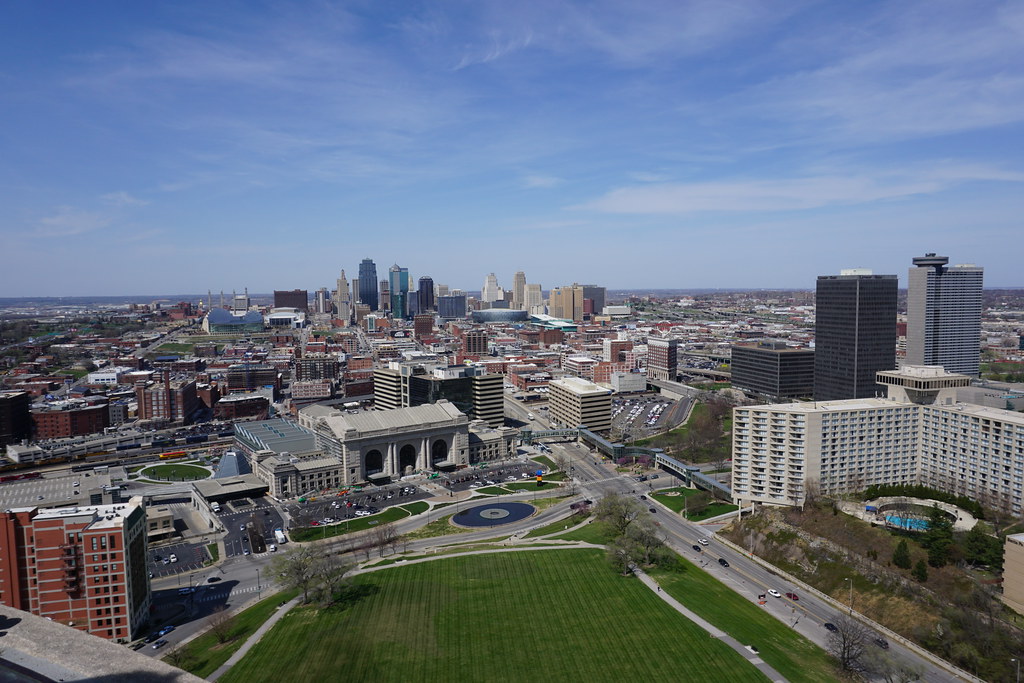 View of Kansas City as Seen from the Liberty Memorial Tower at the National WWI Museum and Memorial, Kansas City, Mo., April 20, 2018.

Kansas City, So Much to See and Do!
Allegiant’s nonstop service between Punta Gorda and Kansas City certainly made it easy to get there at an affordable price. There’s so much I did not get to see and I hope another visit to Kansas City is in my future.

Have you been? If I do visit again, what is something I must do, eat or see?

Disclosure: This post contains affiliate links to support this blog, my traveling habit and my special-needs dog.