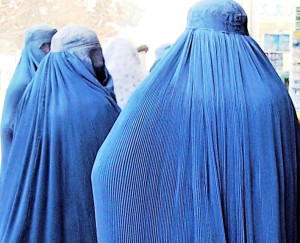 Sky-blue burqas continue to flow down the dusty streets of Kabul. They’re remnants of the Taliban’s harsh reign and belief women should not be seen.  While Afghan women are no longer required to wear burqas, many prefer wearing the full-body, shapeless cape while in public. Or sadly, their husbands or other male in their life demand they be worn.

Behind the walls of Kabul’s Baghe Zanana (commonly known as the Women’s Garden), I spent an afternoon shopping and meeting with Afghan women. This is one of the few places in Kabul where women of all ages feel comfortable shedding their burqas and being themselves. Mothers watch their children romp in the playground while enjoying a picnic and laughing with friends in a serene, safe setting. Afghan men are not permitted into this sanctuary.

I exchanged smiles with each woman I passed while browsing the little shops run by Afghan women. A woman half wearing a burqa caught my eye. She had lifted it over her head and wore it almost like a cape. Her beautiful, green-brown eyes sparkled and her distinct, hooked nose stopped me. For some reason, I had the feeling she wanted to talk.

Smiling, her curly, dark-haired head nodded and began chattering way. Unfortunately, I was limited in the native tongue, but somehow, we were able to communicate. Finally, I couldn’t resist. I needed to know. Using hand motions, tugging at the burqa and pretending to walk, I did the best I could to mime, “How can you walk and function in that burqa?”

She understood what I had communicated because the next thing I knew, she was proudly strolling down the sidewalk and suddenly stumbled and tumbled to the sidewalk.  At first, I thought she was hurt. She was belly up on the ground, her arms wrapped around her stomach and laughter suddenly rolled out and her giggles were contagious.  Within seconds, she was surrounded by a group of burqa-caped women howling with laughter, too.

Laughing myself, I extended my hand to help her up. As a small token of appreciation and hoping she would remember our brief interaction, I gave her a postcard and pin from my home town. It wasn’t much, but she grasped the items with her henna-stained hands, as if I had given her gold. Head tilted and with a smile, her right hand patted her heart. Under her breath, and in perfect English she whispered, “Thank you.”

Although she wasn’t one of the high profile officials I met and I am just an ordinary citizen of the U.S., our interaction had some impact in building a small pocket peace in the world. We didn’t exchange names, but I will always remember her.  And most importantly, I learned laughter is an international language.

Note: This was written shortly after my March 2006 trip to Kabul, Afghanistan, with Global Exchange. Visit the blog I kept during the trip at QKGirlAfghanistan.blogspot.com.

Disclosure: This post contains affiliate links in order to support this blog, my traveling habit and my special-needs dog.