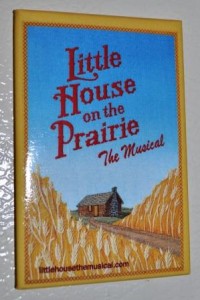 Little House on the Prairie the Musical Souvenir

I blame Laura Ingalls Wilder. Yup. She’s the one to blame for my thirst for adventure. Like all little girls growing up in the ‘70s, I devoured the Little House on the Prairie books. When I was about 10, I began writing my own autobiography but then realized my life was pretty boring: I didn’t live in the middle of nowhere, didn’t have a horse named Bunny or have to suffer through horrendous snowstorms although I did live through the Blizzard if ’77.

Laura & Me Go Together Like Peas and Carrots
Laura was a spirited, spunky and independent tomboyish-type gal who later embraced her femininity.  And like so many other little girls my age, I wanted to be best friends with Laura Ingalls.

I loved the Little House television series – the one from the ’70s and ’80s, not the 21st century remake which should never have been allowed to broadcast. Melissa Gilbert brought Laura Ingalls to life over the series’ decade and that’s why I had to see Little House on the Prairie the Musical when it rolled into Tampa’s Straz Center for the Performing Arts (March 6, 2010). All grown up, Melissa Gilbert plays the role of “Ma”.

It was odd seeing Gilbert in the role as Ma and I had to convince myself she was Ma rather than a grownup Laura. Her vocals could be stronger but energy and passion for the character and story overshadow that weakness.

The evening’s shining star was Kate Loprest in her role as the carefree and sometimes funny Nellie Oleson. Steve Blanchard played a convincing “Pa” and Gilbert’s son Michael Boxleitner had the role of Willie Oleson.

Little House on the Prairie the Musical keeps a moderate pace and the finale was a foot-stomping, handclapping memorable good time. And kudos to the orchestra for an amazing performance throughout the entire evening.

I appreciated how the story followed the book series rather than the television version yet was disappointed there wasn’t a Mrs. Oleson character. Doc Baker, Mr. Oleson and Mr. Edwards had appearances but no Harriet Oleson. But I suppose that’s okay. I still enjoyed the show and all Little House on the Prairie fans will adore Little House the Musical.

Solo at the Theater
This was my big solo night at the theater and other than finding a parking spot – which was really easy with the exception of one-way streets threw me off for a bit – all went smoothly. Since it was just me and I booked my ticket a couple of weeks before the show, I was able to score a decent seat. I arrived early enough to enjoy dinner not at the Maestro’s Restaurant (which had a buffet) but at Maestro’s on the River – a lovely outdoor bistro. Menu selection was limited – chicken sandwich, hamburger, etc. – but satisfying. Despite the cold temperature that night, I sat along the river enjoying the view sipping a glass of wine and enjoying the pre-theater scene.

My Little House the Musical would have been over the top if the cast held a meet and great with the audience.