Everglades National Park is Open During the Federal Government Shutdown But…

A Partial Federal Government Shutdown and the National Parks

As I write this, it is day 31 of the partial federal government shutdown. It is the longest one in United States history. Is an end in sight?

Friends relying on the National Park System for a source of revenue are hoping so. Unlike other shutdowns, national parks are open, but, they are not properly manned due to furloughed National Park Service staff. This means range-led programs are cancelled and visitor centers are not staffed by NPS personnel. Law enforcement is funded differently and they are patrolling in some capacity.

What I Recall About the ’95-’96 Government Shutdown

I lived and worked in Everglades National Park at the Flamingo Lodge & Marina during the 1995-1996 government shutdown. Roads into national parks were closed and visitor services could not be utilized.

The 95-96 shutdown economically hurt the property and businesses surrounding the park. Federal workers were eventually paid, but, contractors, concessioners, and others who economically rely on the national parks did not receive financial compensation.

National Parks Are an Economic Driver for Communities

National parks are an economic generator supporting jobs and a way of life for many communities. Research released by the National Park Service indicates national park visitors spent about $18.2 billion in gateway communities and generated about $35.8 billion in economic input during 2017.

The parks are open and private industry is not losing money, right? That’s not how it works. I reached out to some outfitters and an authorized

Is Perception Reality? Parks Are Open, But…

Is perception reality? Is the shutdown keeping people away from the national parks and preserves?

“We are still in full operation, but the world does not know it. The perception of the general public is that the Parks are closed as part of the ‘shutdown,'” Capt. Wright said.

“Both Big Cypress National Preserve and Everglades National Park are open for guests. The public perception is obvious in the daily calls that we receive asking if the Park is closed,” he added.

Federal Government Workers May be Compensated But Not Outfitters, Concessioners, and Contractors

“This affects not only the business as a whole but specifically our guides’ ability to make a living. We are seasonal business so this time of the year our guides need to ‘make hay,'” he said. “However, unlike the furloughed federal employees, who will eventually get their back pay, even though no work was done. We will not get anything back. It is lost. Gone. It can’t be made up.”

“It may be a little but when they call us and they find out that we are open and they do not have to pay an entrance fee, they are happy,” Mr. Ken Kroll responded when asked if the shutdown is affecting business at Flamingo Adventures at Everglades National Park. Mr. Kroll is the general manager of the property. Guest Services, Inc. (GSI), an authorized concessioner of the National Park Service, manages it. Narrated boat tours; kayak, canoe, and bicycle rentals; a marina store; and camping are some of the available services at Flamingo.

“Honestly I’m off to my best year with a lot of advanced reservations. People are curious about the parks. It’s like the pythons,” he said. “People want to see them because of the hype. We’ve never seen one.”

Spreading the Word with Traditional and Social Media

Many businesses who rely on the national parks have taken to social media to share they are open. Everglades Day Safaris pinned a Facebook post to their page. It states, “Despite the government shutdown, we will still be permitted to operate in Big Cypress National Preserve and Everglades National Park with no disruption of our services. Some park services will be closed. Restrooms will be accessible throughout the day.”

National media have reported some parks have had damage to natural resources or unsanitary conditions. No one I contacted had heard of any damage to Everglades National Park resources or facilities. 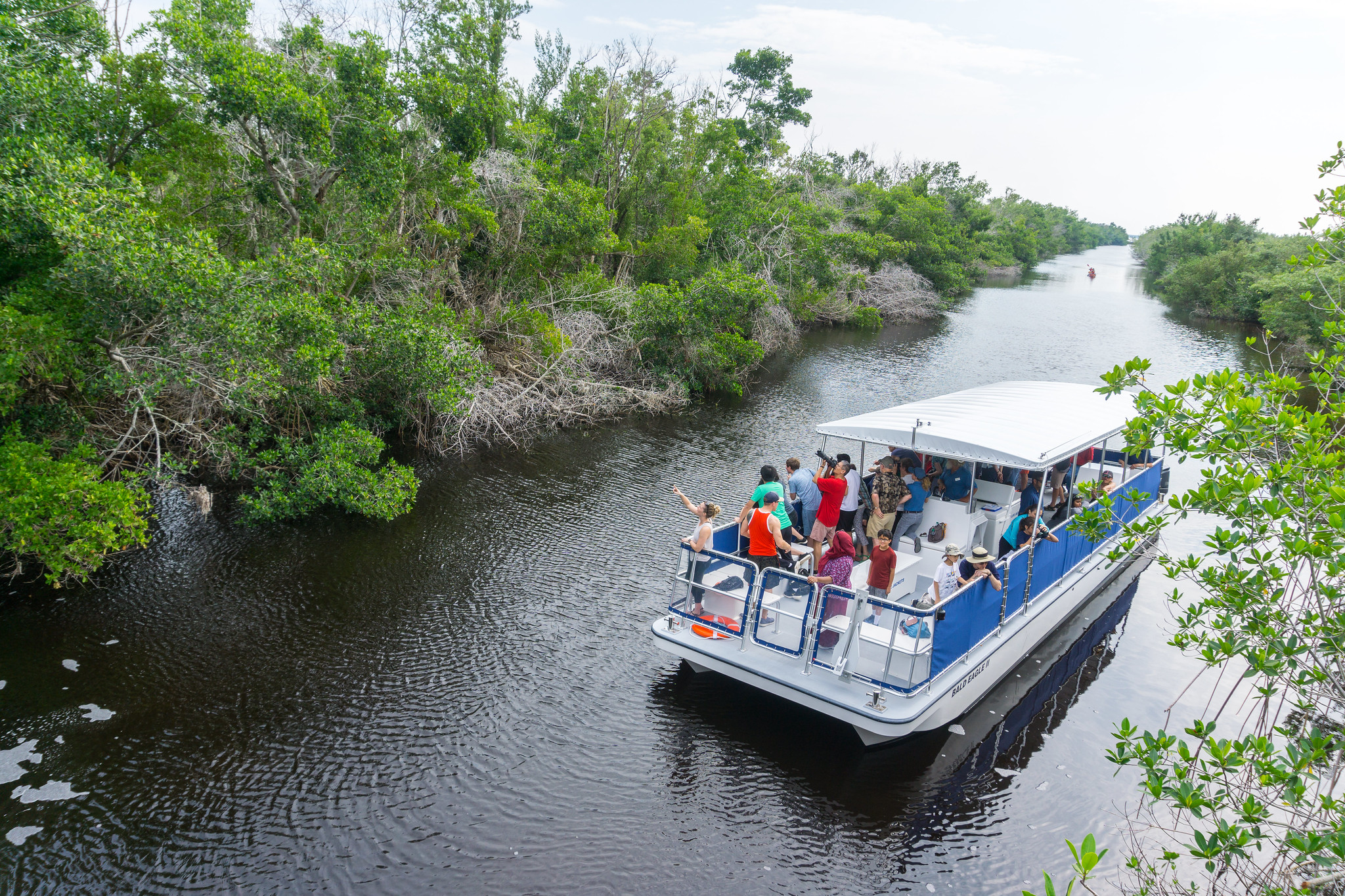 GSI has gone as far as taking care of a sewage problem at Long Pine Key Campground. They manage the campground, but the National Park Service is responsible for large maintenance issues like this. GSI corrected the problem by bringing in a contractor.

The Partial Government Shutdown Has a Trickle Down Effect

“The effects of the shutdown are also indirect,” Capt. Wright told me. “For example, we are trying to bring another boat into service and a need a radio permit from the FCC and, yes, they are shutdown. What should be a simple administrative task now has us dead in our tracks.”

In Flamingo, GSI is waiting for approval from the Army Corps of Engineers to move forward with “trenching for the underground wiring for the Eco-Tents,” Mr. Kroll said, which will then need approval from the National Park Service. The 20 Eco-Tents are part of the master plan to restore overnight accommodations (other than camping) in Flamingo. Mr. Kroll added NPS has been doing all they can to move the project along.

#FindYourPark: It’s the American Thing to Do

Flamingo Adventures, Everglades Area Tours, Everglades Day Safari, and other operators want visitors to know Everglades National Park and Big Cypress National Preserve are open during the partial federal government shutdown. The experience may be different, but visitors will still have a memorable visit.

How You Can Be a National Park Hero

The shutdown negatively impacts businesses and the livelihood of others who rely on the health of national parks. If you have the means, I encourage everyone to find your park and visit your national parks often. It is the American thing to do. You can also help by volunteering and contributing to the National Park Foundation, the official charity of the National Park Service.

“All is not bad,” Capt. Wright told me, “I am still absolutely delighted be able to live and work in such a wonderful part of our planet, America’s Everglades.”