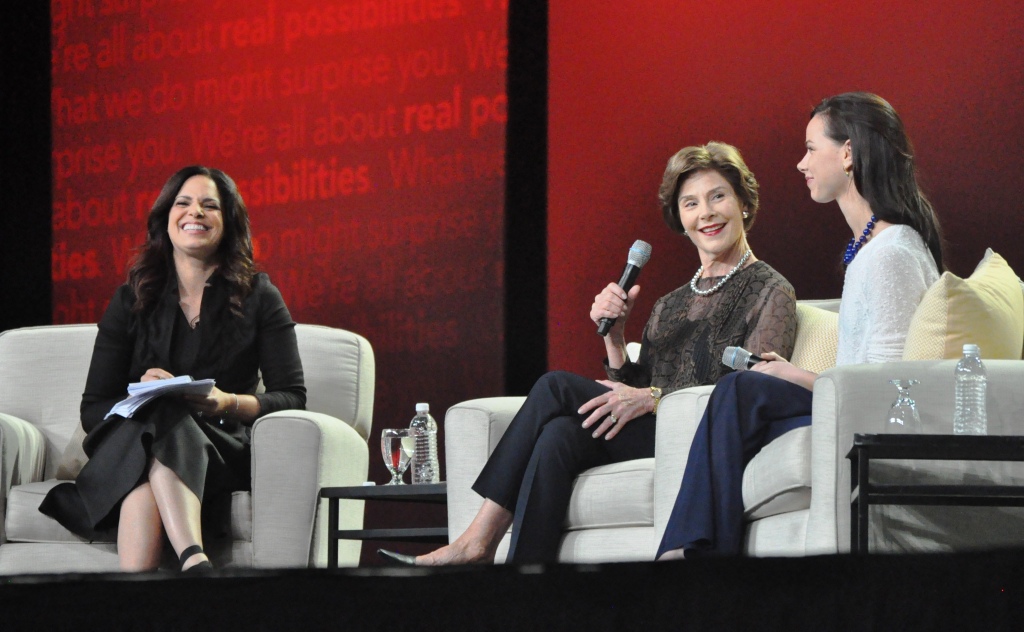 Former First Lady Laura Bush and her daughter Barbara Pierce Bush addressed civility and life after the White House during AARP Life@50+ in Boston this spring. Since departing the White House, the George W. Bush family has been relatively quiet about political life and hearing the mother-daughter presidential duo was refreshing. I wish everyone, no matter their political affiliation, would listen to what they have to say. 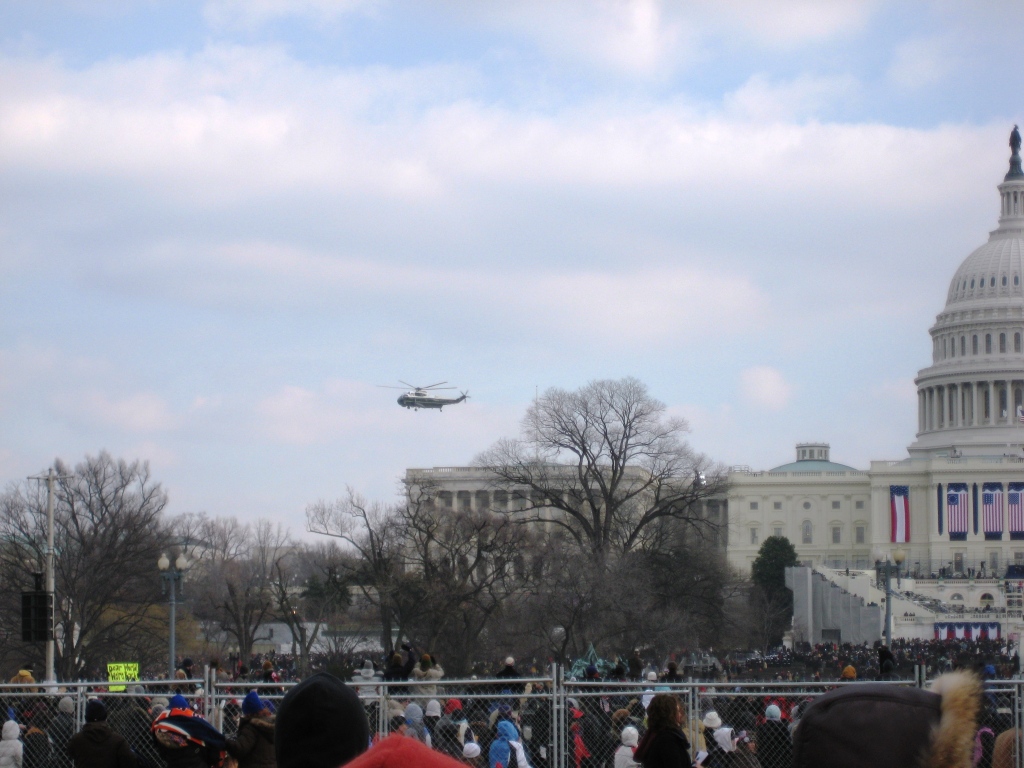 Office of the President Past and Present – Where’s the Civility?
I was in Washington, D.C., participating in inauguration festivities on January 20, 2009, the day in which the Bush family departed the White House while Barack Obama was sworn in as President of the United States. Although I was excited about hope and change, I was disappointed in the civility of the crowd.

As George W. and Laura Bush departed by helicopter, the crowd began chanting “Nah nah nah nah, nah nah nah nah, hey hey hey, goodbye.” Whether you liked him or didn’t, there needs to be a certain level of respect for the Office of the President and I definitely did not feel or see it that day.

Fast forward to May 9, 2014, where journalist Soledad O’Brien facilitated the conversation in Boston with Laura Bush and Barbara Pierce Bush. She asked what life was like in the White House.

“Of course it was stressful but it was also fun and it’s a huge privilege to have the chance to live in the White House. We had, of course, an advantage that the only the John Quincy Adams family had before us, that is we knew the White House very, very well,” Mrs. Bush said, explaining her family had stayed in the White House when George H. Bush was president. 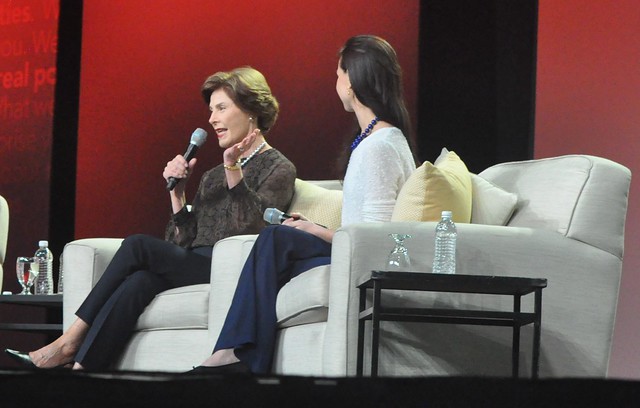 There needs to be “more civility with each other in politics,” Mrs. Bush told the AARP Life@50+ Boston audience, May 9, 2104.

“It was difficult to see the person you love characterized by the media,” the former first lady said about the media’s coverage of the former president.

Ms. O’Brien asked Mrs. Bush her thoughts on civility and she replied, “Civility is a problem. It’s obvious in political life” and said it’s “important to teach civics in schools.”

Mrs. Bush further explained how political life in Washington was not like it is in Texas. When President Bush was the Governor of Texas, she explained, elected officials of opposing parties were more accessible for him to meet with because his office was located where their offices were. Because of this, there was a friendly rapport. Compared with the nation’s capital, the White House does not offer the president the same accessibility to representatives and congressmen.

There needs to be “more civility with each other in politics,” Mrs. Bush said and added the “need to figure out ways to reach across” as “it [being civil] sets an example for the country.”

Can you think of a former U.S. president who has NOT criticized their successor?

“George doesn’t speak out and share opinions because he doesn’t want to second-guess the current president,” the former first lady said, “He doesn’t think it’s good for a former president to criticize his successor.” 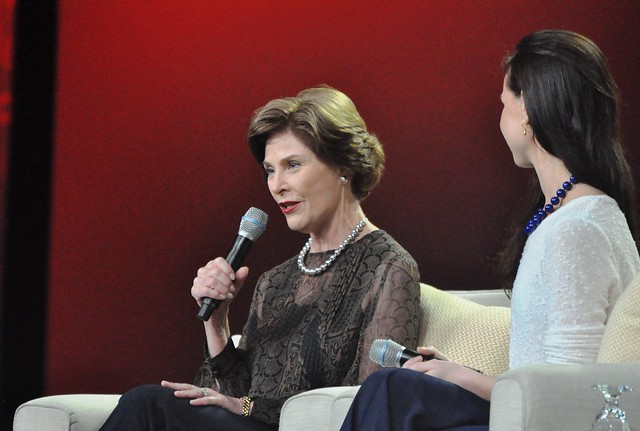 Life After the White House
“What’s the number one issue facing women around the world?” Soledad O’Brien asked.

There was a silent pause.

The audience laughter and Mrs. Bush clarified her response. She gave examples as Afghanistan women being denied education, the horrific kidnapping of teenage girls in Nigeria and internationally, some cultural beliefs are destructive to women.

Mrs. Bush provided an overview of the George W. Bush Institute, a public policy center the couple founded in 2009. It’s “built on principles that guided the Bushes in public life.”

I had no idea how involved the Bush family is with women’s global health. The Institute’s primary global health program is Pink Ribbon Red Ribbon. As Mrs. Bush explained, six million in Africa are “living productive lives with ARVs (HIV Antiretroviral Medication)” and “women are living with AIDS but dying from cervical cancer.” 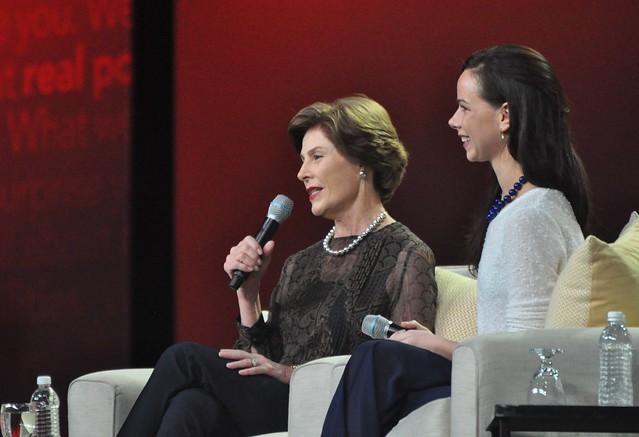 “Take advantage of your life as it is and walk on the beach every chance you get,” Laura Bush said to the AARP Life@50+ Boston audience, May 9, 2014.

“George believes freedom is an instinct and desire for everyone,” the former first lady told the audience when discussing the Bush Institute’s focus on human freedom. She explained how the 43rd recently met an escaped prisoner from North Korea who was born in the prison. This person did not know what freedom was yet had the desire and courage to escape.

Did you comprehend that? Someone who was born in prison had the instinct to escape to freedom. 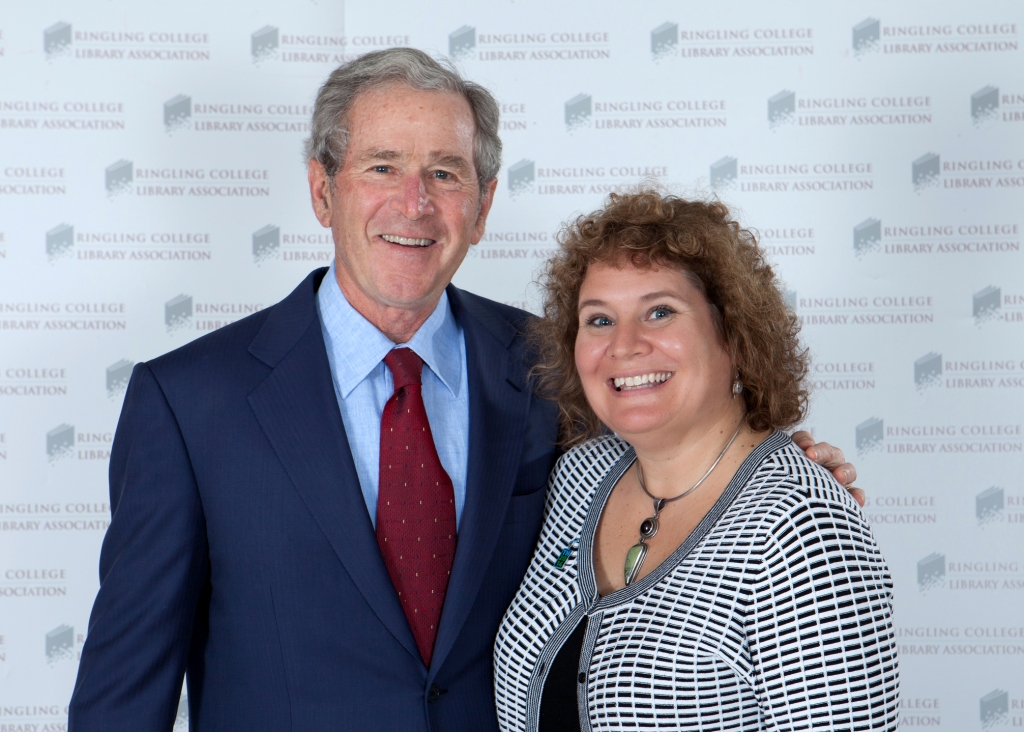 Since I’m Writing About the Bush Family, Thought I’d Through in This Photo of Me with President George W. Bush in Sarasota Earlier This Year. Image Credit: www.robertpopephotography.com

Updates on the Bush Family
“George and I believe they are teaching us to age with grace,” the former first lady said of Former President George H. Bush and mother-in-law Barbara Bush. Her mother-in-law walks the beach everyday she can and encouraged the Boston audience to, “Take advantage of your life as it is and walk on the beach every chance you get.”

“George says she’s just continuing the Bush family tradition of warm relations with the media,” she said of daughter Jenna Bush Hager in reference to her job with The Today Show. Bush Hager is also mother of their first grandchild.

“This is a good example for people our age. You can teach an old dog new tricks,” Mrs. Bush said of her husband, now a much-talked about artist, “I was shocked he would take to painting.”

Thank you Mrs. Bush for showing me the definition of a class act.

Be sure to read how President George W. Bush helped me make my peace.

Image Credit of Me with President George W. Bush: www.robertpopephotography.com.

Disclosure: This post contains affiliate links to support this blog, my traveling habit, and my special needs dog.