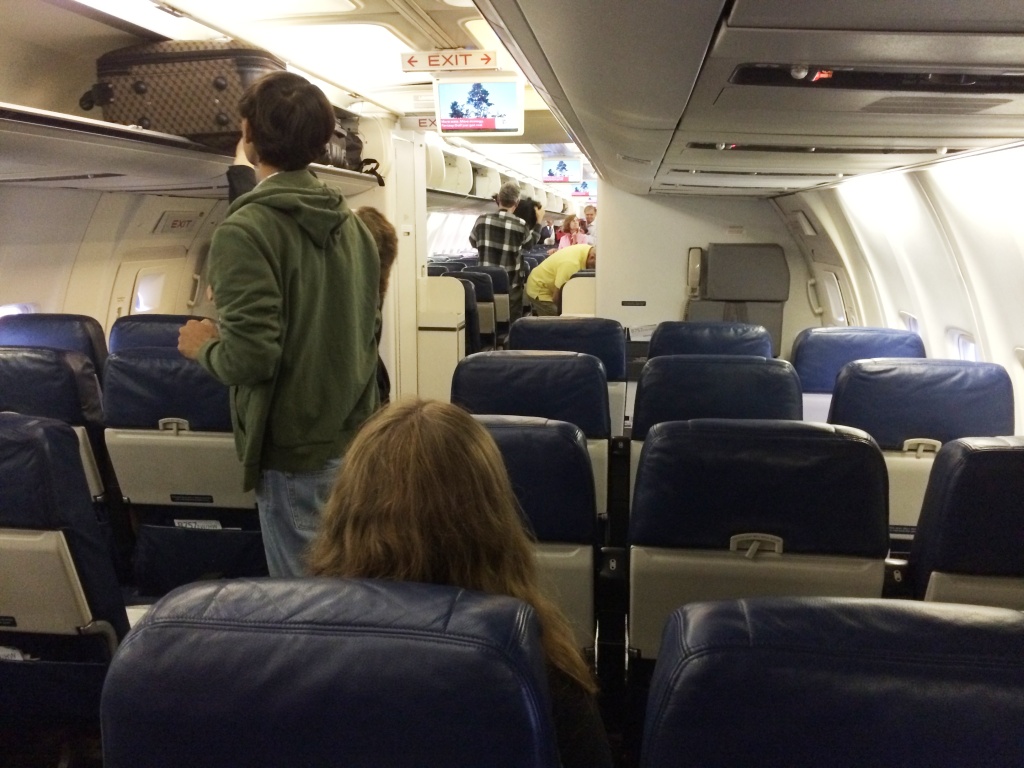 The plane that would take me from Philadelphia to Lisbon.

“Portuguese flight attendants are surly,” a friend warned me.

“I’ll dish it right back at them,” I cheerfully replied.

This little tale of flying from Philadelphia to Lisbon begins with a rogue boot in the overhead luggage bin but does not involve Prince Charming.

“Whose boot is this?” a flight attendant yelled.

I turned around to see a sturdy, gray-haired man holding an ankle-high boot in his hand and he again belted, “Whose boot is this?”

There was not much joy on this man’s face.

After he repeated his question again, I’m almost certain it was coming to the point where we would need to take off our shoes and try the boot on when thankfully, a 30-something-year-old male siting in front of me sheepishly claimed it.

“It almost fell on this passenger,” the flight attendant scolded.

The passenger humbly took his boot as the flight attendant began pulling bags out of the overhead bin and asking for their owners.

“Whose bag is this?!” he sternly asked then handed the bag to its owner.

Why was he doing this? Because some late-boarding passengers didn’t have room for their roll-aboards and unlike other airlines that would make them gate-check their bag or find room in the front of the plane, Mr. Not-So-Prince Charming played baggage god and decided which bags should be in the overhead.

He came to my backpack, which is the size of a small roll-aboard, pulled it out and in his inside voice asked, “Whose bag is this?”

“Oh, s#!t,” I thought and dutifully claimed it.

He handed it to me and instructed me to place it under the seat in front of me.

Here’s the problem. I follow the rules. The larger bag is supposed to go in the overhead and the smaller bag under the seat in front of you. I already had a bag, my go-to bag with research materials, purse, and toiletries for the flight.

I told him I already had a bag under the seat and asked what I was supposed to do with it when all hell broke loose. I’m unclear as to what happened but after he gave me my bag, he went back and a confrontation began with the passenger behind me.

I’m pretty sure he had a bag taken from the overhead and he was not sure what to do with it. There was some physical contact but I’m unsure if it was intentional or not but the passenger claimed the flight attendant grabbed his arm.

The confrontation escalated into screaming in Portuguese RIGHT BEHIND ME. And, this is when I started rolling some video with my iPhone, not for the video, because it sucks, but for the audio.

Another male flight attendant came back and asked if everything was alright, although, he looked as though he was ready to rumble on behalf of his co-worker.

The passenger behind me, the one who had the confrontation, said “yes” but another passenger said “no” saying something about Mr. Not-So-Prince Charming not being in the right state of mind to work this flight (I’m being liberal in my paraphrasing).

Are these the type of things that make planes disappear into the abyss? I mean, could Mr. Not-So-Prince Charming have access to the cabin and take the plane down because he was having a bad day? These were the thoughts that ran through my mind AFTER the plane departed. Obviously, we arrived safe in Lisbon.

Mr. Not-so-Prince Charming disappeared to the front and before the new flight attendant left, I said, “Excuse me sir, he took my bag out of the bin and told me to store it under the seat, but I already have a bag. What should I do with my bag?”

He asked for my smaller bag, the one I intentionally packed to be with me, in another overhead bin.

“I’ve never flown an international flight,” a young woman three rows back asked, “Are they all like this?”

Mr. Not-So-Prince Charming made several appearances throughout the night and whether intentional or not, several rows did not receive beverage service with their meals. Of the five flight attendants I saw during the flight, only one seemed to enjoy his job.

I suppose the irony in all this is it began with a lone boot and the movie Cinderella was the first film of the night.