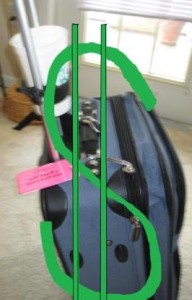 Earlier this week, Spirit Airlines issued a press release stating its new policy on charging passengers for carry-on luggage. Those who use overhead luggage bins will have to pay for that luxury.  If the luggage can fit underneath the seat in front of the passenger, there’s no fee. But, what if you wanted to utilize that space to stretch your legs? Too bad.

Here’s an excerpt from the release:

Members of Spirit’s $9 Fare Club who pre-reserve their carry-on bag in advance online receive a $10 discount compared to non-members and pay only $20 for their carry-on.

“In addition to lowering fares even further, this will reduce the number of carry-on bags, which will improve inflight safety and efficiency by speeding up the boarding and deplaning process, all of which ultimately improve the overall customer experience,” says Spirit’s Chief Operating Officer Ken McKenzie.  “Bring less; pay less.  It’s simple.”

What’s next? Service charge for the amount of air people breathe during a flight? And what about single mommas traveling with their babies and bag of baby needs? Or what about someone who walks with a cane? That doesn’t sit underneath the seat and has to be placed in the overhead bin. Will cane-carrying passengers be required to pay because of their disability?

If Spirit Airlines is annoyed with passengers who bringing carry-on luggage on board, here’s some insight as to why I don’t like checking my luggage and prefer to carry on:

I’m not the only travel blogger or traveler upset about these new fees. In fact, FlyersRights.org has called upon Congress to ban the act of airlines charging for carry-on luggage and from implementing fees to use restrooms on flights, as will be done on Europe’s Ryanair, which will charge about $1.40 to access the bathroom on flights. (During a business trip to the U.K., I’ve flown Ryanair and it’s definitely a no-frills, cattle-call service. Cheap and got me from A to B, but necessarily the best experience.)

Fees for pillows, headsets, snacks and drinks are becoming the norm. Will charging for carry-on luggage be standard come summer 2011? If you’ve had enough of being nickled and dimed, FlyersRights.org has launched a petition to let airline executives know, “ENOUGH IS ENOUGH!” Sign this petition to urge these execs not to charge fees for overhead luggage or bathroom access.

Who is FlyersRights.org? Formed in 2006, it’s the U.S.’s largest non-profit airline consumer organization representing airline passengers and supporter of the Airline Passengers’ Bill of Rights.

I am curious. For those who think this is a good idea, I’d love to know why. Do you really save that much on the flight? Does Spirit Airlines really provide value?